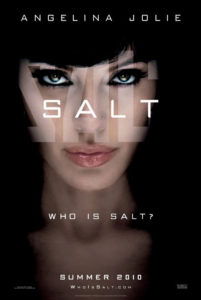 Salt is an actionized spy yarn that has one thing going for it: the mystery as to the numerical value that should precede the title character’s agent status. Angelina Jolie plays Evelyn Salt, one of the CIA’s best, most indispensable agents. When a defecting Russian spy named Orlov (Daniel Olbrychski) fingers Salt as a deep cover mole with plans to kill the Russian president, she makes a run for it. The question remains: Is she a double-agent, a triple-agent, or just a good employee of the CIA who’s wrongly accused of espionage? You’ll figure out the answer rather quickly, making the movie’s ensuing misdirections and double-crosses painful to endure.

What the movie does well is action. And audiences get plenty of it. Once Salt resolves to escape the CIA safehouse to find her husband (August Diehl, from Inglourious Basterds), who may be in danger by whoever is trying to frame her, the movie becomes a nonstop chase sequence. It’s shot with a clear-cut approach thanks to experienced director Phillip Noyce (Patriot Games). A younger filmmaker would have undoubtedly employed unintelligible shaky-cam techniques, which never cease to baffle an audience as to what’s going on in the scene, so Noyce’s attention to detail is welcomed. Salt performs impressive leaps and bounds across the tops of cars. There’s hand-to-hand combat worthy of a Daniel Craig James Bond film. There’s plenty of gunfire and explosions and brutality (but nothing too violent, preserving the bloodless PG-13 rating). And there’s even some Jason Bourne-style wall-crawling.

Indeed, that’s not where the comparisons to The Bourne Identity end. Uncovering vast conspiracies involving super-secret mind control programs to produce ‘the ultimate assassin,’ the story enters all-too-familiar territory reaching back to The Manchurian Candidate. But the script by Equilibrium scribe Kurt Wimmer doesn’t bother with an involving mystery. The twists and turns are as predictable as can be, frustratingly so. Consider the characters, almost none of which we can trust because the script remains incredibly vague about their characterizations. So how can we tell who’s not what they appear to be? By the casting. When a movie about spies and deception has three notable names in the cast, you can bet one or more has something to hide. Those are the type of roles that actors love.

But then who’s the bad guy? I won’t reveal the secret in this review, but here are the candidates: First, there’s Salt. The movie keeps enough distance from Jolie’s character that the audience would be justified in suspecting her intentions. We never know for sure what she’s doing, if she’s plotting or merely reacting to the situation. But she has two CIA agents on her tail, and there’s a good chance one of them may have something to hide because, in movies, CIA agents always have something to hide. Salt’s longtime partner, Ted Winter (Liev Schreiber), wants only to trust her and bring her in for questioning. Whereas Agent Peabody (Chiwetel Ejiofor), a CIA Internal Affairs operative, believes she’s a turncoat and wants her taken down. There’s potential here for a good guessing game, but it’s easy to deduce the culprit long before the movie wants us to.

Jolie has never been convincing in her many action roles. From her two Lara Croft movies to Wanted, she’s always been better suited to dramatic fare such as Changeling or Girl, Interrupted. Part of the problem is her recent overexposure in the media as a tabloid queen. It’s hard now to see beyond her tiring public persona and view Salt as anyone but Angelina Jolie in a wig. That said, the role was initially meant for Tom Cruise, who wouldn’t have improved the outcome much (he chose to make Knight and Day instead, rightly so). Cruise would have stuck out just as much as Jolie. Perhaps a no-name actor could have filled the role and made the movie more convincing, but nothing but a re-write could have corrected the problems with the script.

By the third act, when Salt takes the audience into the White House for a convoluted presidential assassination plot, the movie has pushed our suspension of disbelief past the point where we might care about anything happening onscreen. The characters have all ceased to be interesting, the mystery is gone, and the only reason to watch is the action. And yet, the movie proceeds as if it still has some tricks up its sleeve, which it doesn’t. Spending 100 minutes with some well-constructed action will be enough for some audiences. But when the apparent potential for a clever spy thriller is passed up for a simple adrenaline rush, the result is a disappointment.