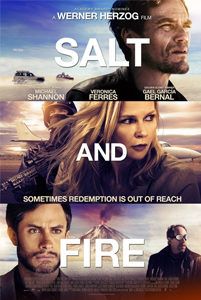 Within the first twenty minutes or so of Salt and Fire, three scientists, played by Veronica Ferres, Gael Garcia Bernal, and Volker Zack Michalowski, doze on a plane. Cinematographer Peter Zeitlinger’s camera pushes forward, its wide-angle lens capturing most of the passengers across the cabin. Just behind the scientists, who have turned in their seats and snuggle their undersized plane pillow, the viewer can spy the film’s writer-director, Werner Herzog. He, too, is dozing, seated upright, his head resting back. And by the final frames of the film, we cannot help but wonder if perhaps this entire experience is a dream in the mind of its filmmaker. It might be the best way to understand Salt and Fire, as a strange reverie born from Herzog’s usual preoccupations: the search for poetic truth in sublime Nature, humanity’s destruction of Nature, the eventuality that Nature will destroy humanity, questions about alien life, and a philosophical investigation into the illusory essence of our perceived reality.

It would be easy to dismiss Salt and Fire as a bad film for its stilted acting and story, which seems to evaporate on the Salar de Uyuni salt flats in Bolivia where it was shot. Most, especially those unfamiliar with Herzog’s approach to cinema, will not know what to make of it. Then again, those versed in Herzog’s perspective may not know what to make of it either; that is, unless they’re familiar with his abstract, indefinable works, like his documentary-from-an-alien’s-point-of-view, The Wild Blue Yonder (2005). What’s more, Salt and Fire is Herzog’s first fiction film in several years (since My Son, My Son, What Have Ye Done? in 2009), so a certain amount of expectation accompanies its arrival. And even though his return to fictional cinema is welcomed, this film is not something so effortless as, say, Rescue Dawn, his 2006 dramatic retelling of his own 1997 documentary Little Dieter Needs to Fly. Though the film may not be accessible, Salt and Fire‘s ponderings are characteristic of their filmmaker and, as you might guess, more fascinating and more conversation-inspiring than a standard Hollywood bauble. For that, it commands respect.

The setup involves the kidnapping of environmental scientist Prof. Laura Somerfeld (Ferres) and her two colleagues (Bernal, Michalowski) during her delegation’s trip to research an ecological disaster called El Diablo Blanco. Their kidnapper, a man named Riley (Michael Shannon), keeps the members of the U.N. research project at gunpoint at an isolated compound in the mountains. As the CEO of the conveniently-named Consortium, Riley feels responsible for his company’s contributions to El Diablo Blanco, an ever-expanding salt flat that was caused by years of improper irrigation and industrialization. Worse, a nearby volcano rumbles beneath the salt flat’s surface, threatening to blow enough volcanic fallout to wipe out the human race. For reasons that are, at first, unexplained, Riley abandons Laura with two nearly-blind twin brothers (young boys named Atahualpa and Huascar, after the opposing brothers of the Incan Civil War ). Stuck on a land island in the middle of a salt flat sea, Laura must survive, learn to communicate with her new delegation, and come to appreciate the equal measure of beauty and horror of the surrounding, almost extraterrestrial landscape. 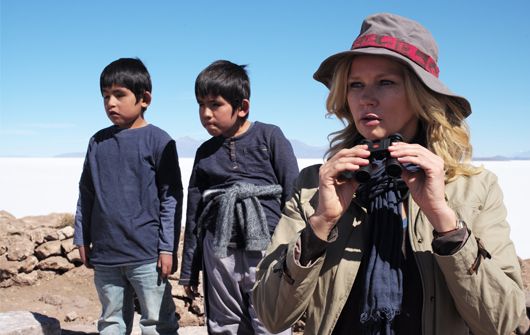 Unfortunately, the distributors at XLrator Media have marketed Salt and Fire as an “eco-thriller” to generalize the film into a promotable genre. The actual film is far less characteristic of, well, anything. Herzog’s curious humor pervades the dialogue, such as when Bernal and Michalowski’s characters find themselves with a case of “the worst diarrhea imaginable.” Or consider the disarming scene when Riley, the self-serious kidnapper and eco-terrorist, explains to Laura how Americans’ rampant belief in aliens somehow suggests its societal neurosis: Only American women over 350 pounds claim to have been abducted and gang raped by aliens, he remarks, while no one in Ethiopia claims to have been abducted at all. So why is that? There’s a lot of talk of aliens and science-fiction concepts throughout Salt and Fire, and underneath the deathly serious tone of the ecological discussion, an unexpected playfulness unfolds. Another character, Riley’s intellectual goon Krauss, appears in an electric wheelchair. Later he stands up, explaining he only sits in the chair when he’s had enough of life (Krauss is played by Lawrence Krauss, a real-life theoretical physicist who was interviewed for Herzog’s Lo and Behold, Reveries of the Connected World).

Sadly, talented actors of international acclaim have the thankless task of being forced to speak dialogue riddled with unnatural modes of speaking. Many uses of “shall” or reflective remarks like “This makes me curious,” alongside a general resistance to contractions, sound affected. However, if Herzog uttered such lines in his droning German accent, they might come off with just the right poetry (so perhaps he’s dreaming the dialogue in his mental voice). Additionally, the characters are thinly sketched and seem to be mere ciphers for Herzog’s own exploration of his subject. Then again, this is appropriate, as Herzog does not see a distinction between fiction and nonfiction; he considers them all with the same nondescript label: films. Maybe his characters are meant to speak in a clumsy, mannered way to capture their scientific sensibilities. Nevertheless, this non-distinction between modes of fiction and nonfiction is apt within the film, especially on formal levels. Zeitlinger has been Herzog’s cinematographer for decades now, and he captures gorgeous imagery in fluid, exploratory camerawork that hovers over the honeycomb-like salt flats—a visual approach that defines Herzog’s documentary work. Accompanying the stunning visuals is Ernst Reijseger’s reverberating score, which transports the viewer into this unfortunate natural setting with the help of the soundtrack’s rather ethereal hymns and chants.

Going back to my original point that Salt and Fire is a dream in the mind of Herzog’s character, this is likely because 1) that’s just the sort of unapparent abstraction that Herzog would conceive, and 2) Herzog’s small appearance is credited as “Man with One Story”—in other words, the story of Salt and Fire. Herzog wrote the script from a Tom Bissell short story called Aral, referring to the Aral Sea between Kazakhstan and Uzbekistan that was drained and entirely depleted due to human irrigation efforts. The director’s worldview is perpetually drawn to and abhorred by human influence on the natural landscape, and with the Aral Sea being among the worst of all ecological atrocities humans have committed on Nature, it’s easy to see that his disgust has brought this film to life. And while his loose, freeform style and disorganized rumination may not conform to narrative standards, and may not even deliver a story that proves emotionally compelling, the treatment and beauty that Herzog finds throughout the production remain superior. If the film is a failure, it fails in the most fascinating, admirable, and lyrical ways.