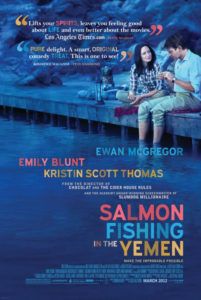 There’s a quiet pleasantness to Salmon Fishing in the Yemen, a romance starring Ewan McGregor and Emily Blunt, two exceedingly charming leads who do more for this film than its interesting title or meandering adaptation could hope for. The screen story, based on the novel by Paul Torday, indeed involves an attempt to introduce salmon fishing into the Arabian Peninsula and settles on a light romance in the process. Bound with the same fascination toward its subject that made Robert Redford’s A River Runs Through It so involving, viewers might find themselves surprisingly engaged by technical talk about what’s required to make terrain otherwise inhospitable for fish suddenly an ideal location through clever engineering. Of course, that’s all just the gimmick for the love story.

Director Lasse Hallström (Chocolat) and screenwriter Simon Beaufoy (Slumdog Millionaire) attempt a balancing act between three ongoing stories that intermingle, albeit awkwardly. The primary story follows Dr. Fred Jones (McGregor), a fisheries scientist with Asperger’s syndrome who is contacted by Harriet Chetwode-Talbot (Blunt), the British representative of the wealthy Sheikh Muhammed (Amr Waked), to bring salmon fishing to the sheikh’s homeland in Yemen. Reluctantly, Fred takes on the multi-million dollar project to appease his boss, who’s being pressured by the British Prime Minister’s press secretary Bridget Maxwell (Kristin Scott Thomas, feisty and funny) to create a positive media spin on Anglo-Arab relations. As the project commences, three stories emerge: 1) Fred and Harriet work through their respective preexisting relationships to form a romance, 2) local Yemenis resist the idea of introducing western culture vis-à-vis salmon fishing into their homeland, and 3) Maxwell uses her influence (and cell phone) to orchestrate this experiment as a PR event.

Beaufoy reportedly shifted the emphasis of Torday’s book from a political satire to a romance, but he also added the Asperger’s syndrome detail. However, whether or not Fred actually has Asperger’s remains unclear within the film, even though Beaufoy has confirmed in post-release interviews that yes, Dr. Fred Jones has Asperger’s syndrome—an overused character mechanism in movies as of late (Adam and Mozart and the Whale), often employed as a way to explain why a character has trouble making emotional connections. In the film, this detail is introduced when Harriet makes a slight quip about Fred’s “unfeeling” behavior being the result of Asperger’s, but one could easily take this as an unkind joke, as opposed to a character reveal. Only in reading about the film afterward was I able to confirm that the filmmakers sought to depict Fred with Asperger’s. McGregor plays the role stiffly at first, but why his mannerisms must result from a condition and not, say, natural emotional reservations, overcomplicates the story.

At any rate, the basic metaphor driving the film is how Fred decides to take his life in another direction; he turns away from his desk job and leaps into something completely new. You know, like a salmon swimming against the current to reproduce. Hallström illustrates this with an obvious visual cue; he shows Fred walking against a stream of pedestrians on the sidewalk. Other corny, eye-rolling visual flourishes crop up in the film, including CGI-created shots that show McGregor and Blunt’s reflections shimmering on salmon-rich waters. To contrast nature scenes and grab hold of the “YouTube generation,” Hallström also includes a visual device in which we see instant message conversations between Maxwell and the Prime Minister popping up onscreen. They’re meant as humorous, but they’re overused and eventually unfunny.

All of these visual elements and subplots come together, I suppose, but in a clumsy way that’s never completely satisfying. One could see how in a novel, the reader might be willing to overlook such incohesive story elements, but on film, they’re inharmonious and made even more complicated than they need to be by Beaufoy’s odd adaptation. Placing more emphasis on what works (namely the romance) and removing unnecessary threads in the plot (the violent Yemeni dissenters, Asperger’s syndrome, the Red Herring love interest) would have made an already long shot-of-a-story feel simpler and decidedly more pleasant. Somewhere in here is a very good romance, and I wish the filmmakers had found it. Nevertheless, the presence of good-looking stars like McGregor and Blunt and Scott Thomas goes a long way to make up for the adaptation’s downfalls. Enjoyable even with its flaws, of which there are many, Salmon Fishing in the Yemen has enough of a sweet romance to earn a mild recommendation.