Bernini’s sculpture Ecstasy of Saint Teresa came to mind watching the extraordinary debut of writer-director Rose Glass, whose Saint Maud could be viewed as a monstrous horror film or a character study of a woman, shall we say, influenced by God. The Baroque sculpture sits in a chapel in Rome and depicts an angel plunging a phallic arrow into Teresa of Avila, a scene drawn from her sixteenth-century autobiography. Saint Teresa appears rapturous, anticipating the spiritual sublimity of the angel penetrating her heart, leaving her in a state of almost sadomasochistic pleasure that recalls the delight experienced by self-flaggelators. The protagonist of Saint Maud experiences something similar—orgasmic bouts of pleasure when she performs the duties she believes that God expects of her; alternatively, she feels searing stomach pains when she does not meet those expectations. Glass carefully balances her film between two possibilities: the titular character really is speaking to and touched by God as she suggests, or she’s schizophrenic with delusions of holy grandeur. The last millisecond of footage might be our only clue.

Then again, Glass has named Taxi Driver (1976) as an inspiration, which is another kind of clue. Her portrait of a young private nurse, played by Morfydd Clark (best known from Love & Friendship and The Personal History of David Copperfield), considers a disturbed individual who spends a lot of time alone, wandering the city streets at night. Though, exactly how disturbed she is remains up to the viewer. The story begins with Maud taking on a new role as the caretaker of Amanda (Jennifer Ehle), a former dancer now in her last days of suffering from Stage IV lymphoma of the spinal cord. In her expositional prayers, spoken aloud as voiceover, Maud sees her new role as a chance to redeem herself after her troubled past, hinted in allusions to some incident that left Maud unemployable in a hospital. Although she admits to having no time for “self-involved” creative types, she nonetheless sees Amanda as her chance at redemption.

Bohemian and bemused by Maud’s recent conversion to the faith, Amanda jests, calling her new nurse “My little savior,” and indulging her writhing pleasure from prayer. Maude explains that God speaks to her and seems to greet her with a pulsing shiver of pleasure. No wonder she wears a Mary Magdalene pendant around her neck—an unconventional but telling choice, suggesting Maud identifies with Mary’s journey from a life of sin to someone later referred to as the “Bride of God.” Her bouts of spiritual exaltation are realized through Clark’s physical performance, augmented by a touch of ill-advised CGI to extend her eyes and mouth to almost supernatural extremes during her climax. But anyone capable of experiencing such overwhelming physical pleasure from the spiritual presence of God is also subject to the opposite extreme. When Amanda mocks Maud’s religion after the nurse attempts to insert herself into her patient’s personal life, Maud recoils in crippling pain. 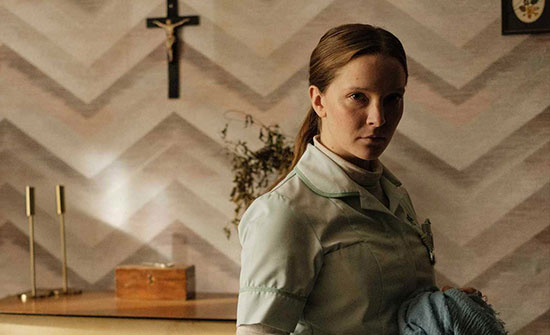 Glass offers a deeper study of Maud in glimpses of her body, scarred with self-inflicted scratches, and her downward spiral after she loses her assignment with Amanda. If Maud is a recent convert, we see what her previous life was like on a single night of desperation and self-debasement. She’s certainly a tragic character who must live in a state of extremes, whether she binge-drinks and hooks up with random men at a local pub, or she atones by kneeling on pebbles or placing tacks in her shoes. Maud is a desperate character who, not unlike Travis Bickle, thinks in absolute terms and creates resolutions in dramatic, heightened ways. Amanda seems to recognize this early on; she gives Maud a book of William Blake’s religious representations, each marked by Blake’s grandiose and self-made mythology. The choice is frighteningly appropriate.

The last twenty minutes of Saint Maud immerse the viewer in her own mythology. Scenes with both God and a demonic character could be seen as either delusions or reality. Only here does Glass’ modestly-budgeted production, distributed in the U.S. by A24, begin to reveal its limited resources. Cheap-looking computer-generated wings, monstrous faces, and hellfire threaten to take the viewer out of what would otherwise be an enthralling experience. But these moments prove so brief that they hardly spoil the finer work on display. In particular, cinematographer Ben Fordesman creates sharp, often symmetrically balanced compositions to imbue the film with a certain iconography. At other times, he skews the image to disorient us, whether that means turning the camera upside-down or just slightly off-center to reflect Maud’s world.

Depending on your religious convictions, Saint Maud might be a straightforward horror film or a portrait of a woman genuinely attuned to spiritual voices. The film cannot help but create associations between Maud and historical figures, ranging from Jesus Christ to Joan of Arc, who claim to have heard the voice of God. Perhaps they actually heard those voices; perhaps not. As a devout atheist, I found the film to be a disturbing look at religious zealotry and the damaged (if not just-plain-crazy) people who sometimes fill themselves with religious certainty. What I appreciate about Glass’ approach is how she leaves room for interpretation, and no matter which way you see the events as they unfold, they remain unsettling. That’s the mark of a superb horror film, such as The Exorcist (1973), which reaches beyond faith and achieves sometimes trickier, more transcendent, undeniably memorable, and certainly haunting.