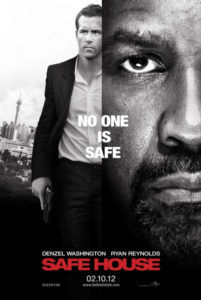 Safe House is another spy thriller “about” the shrinking moral standards driving the international intelligence community, more specifically the CIA, but what it’s really about is providing one actionized setpiece after another within the grainy locale of Cape Town, South Africa. A setup involving Top Secret files and international intrigue gives way to shootouts and car chases that are capably filmed, but populated by uninteresting characters and paint-by-numbers plotting. Although occasionally exciting, there’s a pointed lack of gamesmanship in the events for a yarn involving spies, and a lackluster quality that fails to leave an impression. But the filmmakers are betting you’ll ignore the dull storyline in favor of the impressive cast—namely stars Denzel Washington and Ryan Reynolds—who improve every moment of screentime by their status alone.

The film opens when wanted traitor and ex-CIA interrogator Tobin Frost (Washington) buys a Top Secret computer file from a rogue MI6 agent (Liam Cunningham), and injects this MacGuffin into his skin for safe hiding. Their clandestine deal goes south when a group of armed goons open fire on  Frost, who opts to turn himself in at the U.S. consulate rather than engage in a firefight. The CIA’s head honcho played by Sam Shepard orders his top handlers, Barlow (Brendan Gleeson) and Linklater (Vera Farmiga), to figure out why Frost would turn himself in after being hunted for ten years. In the meantime, to protect Frost they send him to a safe house whose “housekeeper”, Matt Weston (Reynolds), is an inexperienced recruit just dying for his big break. Predictably, Weston’s big break arrives when the same armed goons after Frost in the beginning storm into the supposedly hush-hush safe house and kill everybody, except, of course, Weston and Frost, who narrowly escape and eventually form a bond from this relative meet-cute.

The rest of the story is split: half follows Weston and Frost through Cape Town as they evade their mercenary pursuers; half takes place inside Langley as the CIA bigwigs attempt to figure out how the bad guys have access to classified information. They resolve that their must be a collaborator. The story makes it clear that either Gleeson or Farmiga is the traitor, but which one? Does it matter? They’re both anonymous CIA types completely void of personality aside from their affable screen presence. There’s a lot of that here. Take Frost, whose motivations are never adequately explained. What does he plan to do with the MacGuffin? Sell it? Is he really a traitor, and if so, why does the film think we’ll sympathize with him? Just because he’s played by Denzel Washington? The same goes for Ryan Reynolds; his paper-thin newbie character has no significance behind him other than Reynolds’ star power. The script’s emotional pull is almost nonexistent, unless you count Weston’s French girlfriend (Nora Arnezeder), who remains on the story’s periphery throughout.

For years, writer David Guggenheim’s screenplay has floated around Hollywood until when, a couple years ago, it received a place on “The Black List” of the best unproduced scripts. Knowing this, one expects something more intelligent than your average actioner, but no such luck. Again, consider Frost: various characters in the film talk about how brilliant he is, how he “literally rewrote the book” on interrogation tactics, and how he has an uncanny ability to get inside the head of a subject. Unfortunately, the script never bows any scenes of Frost’s clever mental manipulation. There are moments in which Frost remains calm as Weston panics, but these are hardly moments that showcase a psychological tactician. Weston barks “Stop trying to get in my head!” Frost replies, “I’m already in your head.” But the wordplay getting there was nothing profound, probably because Weston isn’t all that bright, and getting inside his head proves easy-as-pie for Frost.

Safe House feels like one of Washington’s collaborations with Tony Scott—in everything from Crimson Tide to Unstoppable—where the actor plays his everyman persona to serve a diverting hunk of entertainment. Indeed, if you told me afterward that Tony Scott actually directed the film, I would’ve believed you. This is, in a way, a compliment to the film itself, but not its director, Daniel Espinosa, who delivers a very average product that diehard fans of Washington and Reynolds are likely to apologize for. Espinoza uses color saturation reminiscent of Three Kings for the Cape Town scenes and intense editing in his CIA control room scenes; it looks like a combination of Spy Game and Man on Fire. And aside from the opening’s getaway car chase sequence (in which the film peaks too early), there’s little that stands out about the end product—no wowing action sequence or final shootout or character revelation that gives the film a much-needed bang. The result is watchable, but with the talent involved and all the hullaballoo about the script, the film is curiously average. When only a month before Steven Soderbergh’s intelligent and exciting spy-actioner Haywire demonstrated a pitch-perfect example of how this genre should be handled, Safe House should scurry away in embarrassment, its tail between its legs.