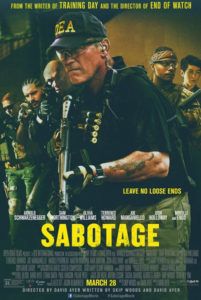 From David Ayer, the cop-centric director of Training Day and End of Watch, comes the ugly and mean-spirited whodunit Sabotage. Ayer’s usual focus on strong but morally complex cop characters is abandoned here to explore a clumsy genre mishmash. Part murder mystery, part cop actioner, and mishandled with a touch of Western justice, the film never finds even footing and stumbles throughout its messy presentation, which is punctuated by bloody violence and a pervasive macho attitude. Headed by Arnold Schwarzenegger, Sabotage boasts an impressive cast of actors (Sam Worthington, Terrence Howard, Mireille Enos, and Olivia Williams, to name a few), each of them portraying gritty characters whose omnipresent jocularity becomes irritating within the first few scenes, and yet persists throughout the 109-minute runtime.

Center stage is a jingoistic, pointedly misogynistic unit of undercover DEA agents who double as an insurgent force. They’re the best at what they do, which mostly involves toting guns, drinking beer, getting tattoos, hiring strippers, and saying “fuck” a lot. Indeed, they’re trying very hard to be badasses, but their forced swearing and tough-guy attitudes just make them sound phony and over-the-top. Schwarzenegger’s John “Breacher” Wharton has assembled a team whose personalities best align with the numbskull roughnecks from Starship Troopers (except without the redeemable comic irony), while their nicknames seem derived from American Gladiators: there’s the Rob Zombie wannabe Grinder (Joe Manganiello), Pyro (Max Martini), Neck (Josh Holloway), Tripod (Kevin Vance), Sugar (Howard), the bald-headed Monster (Worthington), and Monster’s unstable wife Lizzy (Enos), who doesn’t get a nickname because she’s a woman. What most of these names mean in relation to their characters, we never learn.

During a drug cartel raid in the opening sequence, the group is tasked with destroying a mound of drug money. Instead, they hide $10 million in the sewer for themselves and detonate the rest; except, when they return to the scene later to recover their booty, it’s gone. But where? No one knew about their robbery except their seemingly tight-knit group. And when their team members wind up murdered one by one in horrible ways, Breacher suspects the culprit is someone in his unit, which is torn apart from the inside out at the notion of betrayal. Meanwhile, Caroline (Williams), a frustratingly uninformed homicide detective, investigates the murders of Breacher’s crew and gets no closer to uncovering the killer(s), but begins asking questions about the missing money and Breacher’s sordid past.

Refreshingly, despite the ever-present sunglasses and cigar-chomping, Schwarzenegger’s character isn’t the invincible, gung-ho war machine he’s accustomed to playing, but rather a dark individual. We first see him watching a video of his wife’s torture and death by the hands of drug cartel goons, his character clearly internalizing some heavy stuff. As for the other characters, Ayer and co-writer Skip Woods (The A-Team) rely on one-note characterizations to populate the suspects. The members of Breacher’s crew are only differentiated by the actors playing them, while the obvious standout, Lizzy, adopts a male attitude. She likes her booze and strippers just as much as her male counterparts, but her compact size and femininity require Enos to out-act her fellow cast members. As a result, she’s the only interesting character in this ragtag band of abrasive a-holes.

After the film resolves the central murder mystery with a shootout and car chase, there’s a lumbering 10-minute epilogue to resolve Breacher’s issues, and the dull sequence feels tacked on, as if written and filmed as an afterthought. This furthers the film’s disorganized structure, complete with flashbacks, leaps in time, and other devices that render the overall presentation a mess. Sabotage is also incredibly gory; guts and body parts are flung about in ways an audience wouldn’t expect from a police actioner. At least the film is consistent in its excessive,  hard-R approach to everything onscreen. Overall, Ayer’s film feels like an utter waste of time and unmemorable even as a guilty pleasure (although, there’s an unintentional laugh when Schwarzenegger criticizes a portly man’s high body fat percentage, which seems like a self-parody of his mid-1990s self), which has become the standard for Schwarzenegger’s post-governor output.