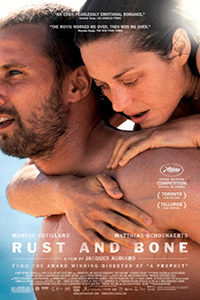 In Rust and Bone, Jacques Audiard tells a confronting and brutal love story about characters who lose limbs, struggle to walk, bash their fists against hard surfaces, and make love. The French director of A Prophet (2009) and Dheepan (2015) connects the viewer to the physicality of his characters, forcing us to experience the sensations of, and trauma on, their bodies—and by extension, we take part in their lives. He shoots scenes of pronounced physicality in such a way that the viewer cannot help but feel phantom sensations throughout our own bodies. Our hands ache and throb, our knees sting, and we feel as though we’ve been intimate with performers Marion Cotillard and Matthias Schoenaerts. After watching the film, we are physically exhausted and emotionally drained. Gradually, Rust and Bone allows us to experience the long and painful recovery of its characters, but as Audiard has concentrated on their physical presence, he has created a gateway to our emotions. He recognizes that emotions are more pronounced when they’re associated with a physical sensation, and he uses that phenomenon to draw in his audience. From his aesthetic attention to corporeal details to the two lead performances of raw strength and vulnerability, Audiard envelops the spectator in the film’s world, making it less a viewing experience than simply an experience.

Based on Craig Davidson’s short story of the same name, the film opens with a dreamy sequence of underwater images that, only upon a second viewing, become lucid and meaningful. Foremost among them is the presence of a young boy and an orca, two peripheral characters whose presence underwater signals the film’s most powerful events. Ali (Schoenaerts), a nomadic sort who defines himself by his physical strength, travels with his young son, Sam (Armand Verdure), to the south of France, where he will live with his sister. Ali is a man whose various jobs require physical strength and a certain degree of animalistic insensitivity—he boxed in his past, but then he works as a bouncer, a security guard, and eventually an underground bare-knuckle fighter through the course of the film. At a nightclub early on, he meets Stéphanie (Cotillard), whom he rescues and drives home, only to discover that her life is perhaps too complicated to get involved with her at the moment—even for one of Ali’s frequent casual encounters.

Stéphanie works at a commercial marine park in Antibes, on the Côte d’Azur, where she trains killer whales to perform tricks to Katy Perry songs, delighting the masses. She’s accustomed to controlling a large animal, commanding its movements with stark hand gestures. But when a freak accident drops her unconscious body into the tank with her animal, she loses both of her legs below the knee, and while recovering, she feels powerless. Some months later, Stéphanie reaches out to Ali, and the two form a relationship based, at first, on casual sex. Unlike other people, Ali is unfazed by her disability. He will not pity her, not only because she doesn’t need pity, but because he is, for the moment, a pitiless man. He is the human equivalent of the killer whale, and Stéphanie’s ability to tame this force of Nature will be her salvation. There’s a beautiful scene where the wheelchair-bound Stéphanie asks Ali to take her to the beach. He does, and then he goes for a swim, leaving her in the sand to watch with envy. Part tough love, part selfishness, Ali’s actions nonetheless compel Stéphanie to accept a ride on his back to the ocean. The image cannot help but evoke Stéphanie on the back of her orca in her previous life. 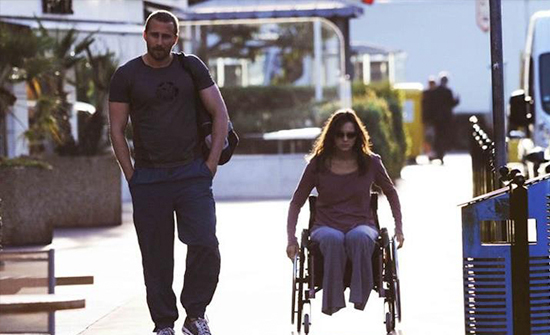 Soon fitted with prosthetic legs, Stéphanie begins to attend Ali’s underground fights, watching him endure brutal, bloody matches. “We fuck each other up bad,” he warns. The pummelling and loss of teeth confirm as much. Perhaps because of her own physical trauma, Stéphanie is drawn to this rather than repulsed by it. They’re connected by their mutual awareness of the physical toll the body can take. Soon enough, she begins to negotiate on his behalf and becomes his manager. But when he’s fired from his day job due to a scandal, he abandons both Stéphanie and Sam to train as a professional boxer at a school in Strasbourg. After a while, Sam visits his father on a wintry, but otherwise idyllic afternoon—a day that ends in near-tragedy when Sam falls through the ice, his body gliding underneath in a nightmare scenario come true. Ali beats on the ice with his fists, blood spattering everywhere as he screams his son’s name, until he breaks through to rescue the boy. If there’s any consolation to the shattered bones in his hands, it’s that broken bones sometimes heal stronger than before. But reducing Rust and Bone to a message of whatever doesn’t kill you makes you stronger would be missing the nuance and intimacy of Audiard’s treatment and the two central performances.

Even so, when Rust and Bone was released in 2012, several critics described its melodramatic qualities in pejorative terms. Variety critic Peter Debruge labeled the dramatics a “somewhat overblown exercise in contrasts” in an otherwise positive review. Michael Phillips of the Chicago Tribune wrote of the film’s “jacked-up tension” as if to call out its artificiality. The dismissive review by Entertainment Weekly critic Owen Gleiberman considered only a single aspect, the role played by Marion Cotillard, and rejected the lack of authenticity in her portrayal of an amputee, calling it “an insult to the disabled.” Many assessments of the film at the time censured its absence of realism, as though good filmmaking could not occur without a realistic depiction of life. Such narrow aesthetic margins omit the inherent theatricality of drama, meaning the flourishes used by dramatists to inflect the real with an artistic purpose. But cinema is not a mirror image of reality; it is an interpretation of it. Moreover, melodrama as an exaggeration or enhancement of reality for dramatic effect has long been a preferred method of storytelling, from Shakespeare to Sirk. Rust and Bone is simply another victim of an absurd trend, beginning in the twentieth century, which suggests “melodrama” is a dirty world.

Audiard and other French directors throughout film history, going back to the Poetic Realists of the 1930s, have recognized the power of melodrama, the potency of heightened emotions and situations, even if they betray some abstract notion of realism. Nevermind that our perceptions of reality vary, and that cinematic realism is every bit an artificially achieved formal exercise as the sensational. For critics of melodrama, the heightening of emotion through dramatic symbolism or intensified conflicts rings false, even if the same process of creation achieves realism. And so, those who see the many symbolic developments in Rust and Bone‘s story as obvious physical manifestations of its thematic concerns are bound to ignore its raw intimacy in favor of a more cynical critique of what are perceived as its dramatic conveniences, parallels, and resolutions. By continually holding realism to a higher esteem, such views also deny the story life on its own terms as a work of poetic drama, ignoring that Audiard and his longtime co-writer Thomas Bidegain often blend elements of the gritty and hyper-real with distinctly elegiac touches. “The better the director,” wrote Anthony Lane in his review in The New Yorker, “the more that melodrama is recast as romantic destiny.” And that’s just what Audiard does here. 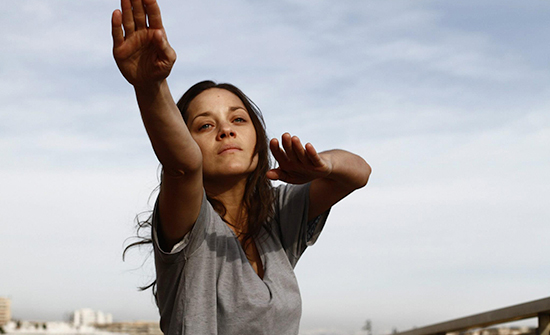 The relationship between Stéphanie and Ali is the sort that does not occur in reality. It hinges on a dramatic interplay between Stéphanie’s occupation and the loss of her legs, and how, symbolically, Ali supplies her with the components she requires to become whole again—and not only whole but a badass who wields the toughest fighter in an underground circuit. Later, she gets ‘‘droite’’ and ‘‘gauche’’ tattooed onto her thighs, and before long she carries a sexual confidence that overshadows the desperation of her once-complete physical self. Similarly, Ali becomes a better father only when he almost watches his son die before him. Throughout the film, Ali’s treatment of Sam is cruel and impatient. When the boy gets dirty after playing with his aunt’s puppies, Ali violently grabs him and begins to hose him down with cold water. In another scene, he tosses the boy in a careless act of frustration. The dramatic irony is evident when Ali’s expert violence is the very thing that saves Sam from drowning. However dramatically artificial these flourishes may seem, the emotions they produce are genuine. And since each emotion in Rust and Bone is inextricable from its physical counterpart, the viewer feels their way through the film in an emotional and physical sense.

Theorist Rudolf Arnheim believed several limitations prevented film from being called a mere mechanical reproduction of reality, including its necessity for aesthetic choices, its mechanical constraints, and its inability to capture reality’s sensuousness and dimensionality. He believed aesthetic choices—ranging from something as simple as camera angles to the way editing interrupts the space-time continuum—prevent film from accurately portraying reality. Not even the human field of vision is accurately represented by the camera, since the camera sees in two dimensions; however, the camera can also see more clearly in long distances or near-microscopic detail, and with sharper resolution than the eye. Additionally, film cannot engage our sense of smell, taste, and touch (no matter how often something like Smell-O-Vision or D-Box seats come along trying to make up for those sensory losses). Even so, Arnheim argued that it is film’s unique ability to engage our vision through aesthetic choices that can produce false sensory responses through our visual perceptions that qualify it as art.

Rust and Bone does not attempt to reproduce reality, despite its subject matter or Stéphane Fontaine’s sometimes gritty cinematography. Audiard seeks to invest his audience on a physical and emotional level; not through narrative realism, but through a sensuous drama that mines the intimacy of its characters. Although some critics dwelled on the film’s decided lack of realism, the director and his two stars received widespread acclaim on the international festival and awards circuit in 2012 for the earnest and passionate responses their work evokes. As with many of Audiard’s films, Rust and Bone engages the viewer’s feelings and impressions—aspects of humanity that are less concerned with logic or realistic expectation. Parenthood, lovemaking, fighting, and existing within a vulnerable physical form require an inherent rawness and toughness, an acceptance of the mind-body dichotomy in all of its imbalance. Rust and Bone makes the viewer profoundly aware of how the body reacts in emotional situations, bonding us to its characters, whose experiences are so deeply felt.