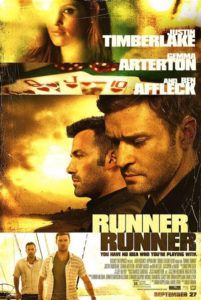 Runner Runner has all the components of what could’ve been a respectable financial thriller, yet it lacks the finesse and care that would lend the narrative necessary tension. Director Brad Furman snagged an excellent cast but doesn’t put them to good use, relying solely on their celebrity instead of their talent. After directing and starring in Argo, last year’s big Oscar winner, and more recently signing up to play Batman, Ben Affleck couldn’t be more popular. Justin Timberlake is always a draw, and, after The Social Network, he’s proven himself a capable actor. Fresh off Neil Jordan’s superb Byzantium, the underrated Gemma Arterton has earned forgiveness for Hansel & Gretel: Witch Hunters. Each of these often terrific performers must have signed on to Runner Runner merely for the paycheck and tropical Puerto Rico shooting locations; because it certainly couldn’t have been the script that attracted them.

The screenplay by Brian Koppelman and David Levien (Rounders, Ocean’s Thirteen) follows a structure suspiciously close to Wall Street, wherein a young whiz kid goes under the wing of a morally bankrupt mogul and loses his innocence through increasingly shady deals, but not before orchestrating his boss’ downfall. Timberlake plays Princeton grad student Richie, who, in an attempt to win his tuition, loses his savings to a rigged online poker site called Midnight Black. When he discovers he’s been cheated, Richie heads to Costa Rica to confront the company’s charismatic but dangerous CEO, Ivan Block (Affleck). Richie’s ambition leaves an impression on Block, so Block offers him a job at Midnight Black, which Richie enthusiastically accepts. Early scenes where Richie is introduced to this world and charmed by Block’s infectious energy are entertaining, but it doesn’t take long for Richie to realize Block is a criminal posing as an online gambling entrepreneur.

With subplots abound, the movie has a lot of ideas but nothing interesting comes of them. As Richie begins to learn the ropes, an FBI agent (Anthony Mackie) tries to convince him to inform on Block. Meanwhile, Richie falls for Block’s trusty assistant and sometimes-lover Rebecca (Arterton), the maybe-or-maybe-not femme fatale who beds Richie and supplies Block with information. Both Mackie and Arterton’s characters feel underdeveloped as if the bulk of their scenes were left on the cutting room floor. Along the way, Richie remains consistently naïve to the kind of people for which he works, although other characters remind us again and again how smart Richie is supposed to be. That Richie couldn’t see Block for what he is—a criminal kingpin—comes as shocking and unrealistic. Here’s a life lesson for you: If your boss keeps live crocodiles as pets, chances are he’s a criminal of some kind.

Furman’s serviceable directorial approach on The Lincoln Lawyer, another movie where the star outshined the story, turns into sloppy and over-stylized attempts at artificial thrills here. Perfunctory chase scenes in Runner Runner play out with the standard wobbles and blurs of Shaky-cam. Shots of fast cars and bikini-clad women further numb the audience to the prospect of something intelligent happening onscreen. Such emptiness is necessary when the script’s narrative arc proves to be frustratingly predictable. Rushing through subplots to meet the film’s strict 90-minute runtime, Furman ignores every opportunity to take potentially fascinating material and turn it into something more than fluff. Indeed, the world of online gambling and the people behind it would make a compelling movie if someone detail-oriented (think Michael Mann) explored it.

But Runner Runner never takes us behind the curtain of online gambling to show us a segment of real-life truths about the industry, nor does it even show Richie’s supposed genius—which everyone keeps talking about. Furman would rather rush through this familiar genre exercise of inept characters and conventional plotting to allow his actors’ celebrity free reign. Affleck gets hammy, recalling his performance from Boiler Room as a tough-talking numbers-cruncher in charge; however, he’s too likable and too clean-cut to meet the scuzzy requirements of the role. Arterton and Mackie are effective enough, though they make no impression. Timberlake’s character seems to be nothing but an empty vessel needed for the story to exist, and the script never questions Richie’s moral decisions the way it should to make the character compelling. And though the film is over before it ever gets going, the good-looking cast doesn’t make the substance-free story worth enduring.