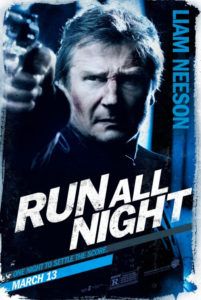 Liam Neeson stars in his third collaboration for helmer Jaume Collet-Serra in Run All Night, a forgettable actioner that no doubt provides Neeson a hefty payday for yet another middling effort. In 2011, this actor and director team made Unknown, a Hitchcock wannabe of unremarkable proportions. Then Neeson starred as an alcoholic sky marshal in 2014’s Non-Stop, a murder-mystery-on-a-plane that also mismanaged its Hitchcockian influence. Run All Night spares audiences Collet-Serra’s poorly executed strokes of Hitchcock but gives us another series of bungled clichés instead. Despite its impressive cast, including Ed Harris, Joel Kinnaman, Vincent D’Onofrio, and Common, the tired plotting and uneven direction are enough to leave the audience feeling mildly insulted by its mediocrity.

The film features Neeson once again playing a rugged alcoholic with a gun; this time, he’s former Irish mob hitman Jimmy Conlon, once nicknamed the Gravedigger. Now washed-up and lost in drink, Jimmy barely makes ends meet, has no friends, and leeches off his former boss, Shawn Maguire (Harris). Years back, Jimmy and Shawn ruled their New York City neighborhood with drugs and violence. The years have been much better to Shawn, who still oversees his operation as a “legitimate businessman”. Jimmy, meanwhile, begs for handouts to keep the heat running. Both men had sons, too. Jimmy’s son Mike (Joel Kinnaman), a limo driver, won’t talk to him or introduce his wife and kids to their drunken father-in-law/grandfather. Shawn’s impetuous son Danny (Boyd Holbrook) wants to be a gangster like his old man, but doesn’t quite have the mob boss tact down.

When an Albanian drug deal goes bad inside Danny’s apartment and Mike witnesses the resultant shooting, because he’s chauffeuring the Albanians, Danny resolves to do as his father suggested and clean up his own messes, which means killing Mike. But Shawn wants the whole thing defused without violence, so he sends Jimmy to make sure Mike won’t squeal on Danny. Jimmy almost arrives too late, as Danny already has Mike in his sights. Jimmy has no choice but to kill Danny, and Shawn has no choice but to retaliate by sending the entire Irish mob and a laser-sighted hitman named Price (Common) after Jimmy and Mike. Veteran Det. Harding (Vincent D’Onofrio) is hot on Jimmy’s trail as well, and he’s wanted to catch the Gravedigger for some 30 years. As the father-son fugitives try to gather Mike’s family and get out of town, they also patch up a long-since-broken relationship.

The action, including an impressive car chase, hops about New York City, leaping from one side of the metropolis to the other. Collet-Serra connects one location to the next visually using shoddy CG-animated transitions that quickly zoom over city blocks in a matter of seconds. In a comic-book movie, these transitions would have worked. In a gritty crime-thriller, it’s a laughable flourish that doesn’t blend well with Collet-Serra’s other visual touches or the genre. Specifically, like every director who filmed on-location in New York before him, he tries to make the city a central character by shooting candid street scenes in a handheld style, something akin to modern neorealism. Pair his synthetic transitions with his realistic, docu-style street footage and you get an incongruous visual package. Along with overhead and low angles, various color saturations, and hyper-slow-mo, these visuals seem like Collet-Serra and his cinematographer Martin Ruhe were more interested in experimenting with various styles instead of employing something consistent.

The screenplay by Brad Ingelsby (Out of the Furnace) takes one predictable turn after another, especially given how the story begins with a bullet-riddled Neeson remembering how it all went down. The viewer anticipates every angle before it comes, making Run All Night seem tedious and overlong. Indeed, we’re just waiting for the things we know will happen to actually happen. Neeson and Harris lend their roles some dramatic weight, with the former shining during his early drunkard scenes, and the latter delivering an intense threat later in the film. Elsewhere, the cast feels like they’re on autopilot, often in wasted roles (such as Nick Nolte, who shows up for a brief cameo).  Through it all, Collet-Serra seems so bored with the material that he entertains himself by incorporating an array of visual tricks that fail to give the film a consistent personality, whereas solid and focused direction is often what enlivens ho-hum material like this.