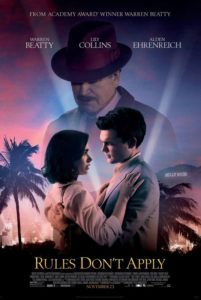 In portraying the mysterious and chaotic life of billionaire Howard Hughes, filmmaker Warren Beatty gives Rules Don’t Apply a frenzied editing style and unfocused narrative thrust. The film leaps from one snippet to the next, as though countless hours of footage were chopped up and drastically reduced to deliver a just-over-two-hour runtime. No doubt the four-person editing team followed instructions from Beatty—their writer, producer, director, and star—who attempts to capture Hughes’ hectic life and present it as a religious parable, or perhaps a lesson about resisting the temptation of wealth. Indeed, Beatty does not deliver a typical biopic; rather, he offers a story of romance in Hollywood, where two lovers are separated by and devoted to Hughes, their enigmatic employer and an apparent substitute for a godly overseer.

An icon of seventies cinema such as Bonnie and Clyde and McCabe & Mrs. Miller, Beatty has not appeared in a film since Town & Country, the disastrous 2001 flop, and hasn’t directed since 1998’s underrated Bulworth, so his return to pictures is very much anticipated. As a director, Beatty has made a lot of risky choices and most of them have proved to be successes. He won the Oscar for Best Director after helming Reds in 1981, a sweeping epic about John Reed, an American journalist radicalized during the Communist revolution in Russia. Later, in 1990, he made Dick Tracy, a pulpy and vibrant comic-book-come-to-life. He’s been developing a film about Howard Hughes for several decades, but occasionally the longtime passion projects of renowned directors can be over-developed, as evidenced in Oliver Stone’s Alexander or Martin Scorsese’s Gangs of New York.

Written by Beatty from a story he conceived with Bo Goldman, the film follows wannabe businessman Frank Forbes (Alden Ehrenreich) and ingénue Marla Mabrey (Lily Collins). Frank studies finance and thinks he has a smart deal for Hughes, except he gets hired as a private driver instead. But Frank isn’t driving Hughes; he’s chauffeuring around the gaggle of virginal starlets that Hughes maintains in various posh apartments around Hollywood. Among them is Marla, who arrives from Virginia alongside her wary mother (Annette Bening) with ambitions of becoming an actress. And while Hughes’ intentions for these various young ladies remains suspect, they endure the eccentricities of their treatment for a chance to finally meet their mysterious employer and make it big.

After nearly thirty minutes of screentime, Beatty finally appears as Hughes, complete with a number of ticks and charismatic traits, and initially shown under the veil of shadows. And while Beatty attempts to establish Hughes as a supporting device to facilitate the budding romance between Frank and Marla, he remains the most compelling element on the screen. It’s a supporting role that unintentionally becomes the lead. As a result, Rules Don’t Apply feels unbalanced for its lively scenes with Hughes and its lackluster scenes involving the romance plot. Alongside another driver, Lavar (Matthew Broderick), and Hughes’ personal assistant (Candice Bergen), Frank is subject to Hughes’ whims and degrading mental stability—just as Marla’s future seems to be held in Hughes’ elusive hands. Eventually, Frank becomes Hughes’ most trusted assistant, while Marla becomes the object of Hughes’ curious affections. 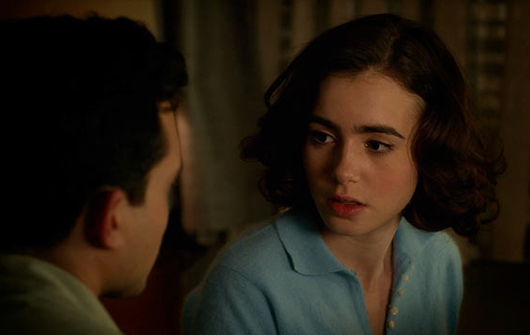 Of course, Beatty’s performance as Hughes stands in the shadow of Leonardo DiCaprio’s terrific and complicated portrayal in Scorsese’s The Aviator (2004). By comparison, Beatty uses Hughes in trivial and borderline disrespectful ways. Many of Hughes’ more peculiar behaviors are used for silly laughs, despite them being the result of an obvious mental illness, a decision the film seems to justify given the billionaire’s wealth (He’s not a real person, so why have respect for him?) and eventual portrayal as a quasi-romantic. This treatment would be more effective if Hughes had more of a supporting role, but as stated, he outshines the comparatively dull plot concerning Frank and Marla.

Meanwhile, Rules Don’t Apply features a lot of familiar faces that have blink-and-you’ll-miss-it roles in subplots that exist primarily to demonstrate the restless lifestyle Hughes maintained. Martin Sheen appears briefly as Noah Dietrich, Hughes’ longtime executive and friend. Alec Baldwin (who also appeared in The Aviator) has a small role as the CEO of TWA. Ed Harris plays the father of Frank’s conservative fiancée, played by Taissa Farmiga. Steve Coogan pops in to play a British pilot nervous about letting Hughes fly. These cameos are distracting asides and bits of off-the-wall humor that represent the film’s overall lack of cohesion, as well as Beatty’s persistent need to portray Hughes as an omnipotent but scattershot figure.

And while Beatty conveniently disregards any need for factual consistency in his film with an opening quote attributed to Hughes (“Never check an interesting fact”), he includes, but nonetheless barely touches on, major biographical events from Hughes’ life: his time at RKO, the Spruce Goose, the near-selling of TWA, and the Clifford Irving scandal all recede into the background of the central love story, which remains so run-of-the-mill that it cannot compare to such monumental events. In the end, after a leap in years, Beatty offers a depiction of Hughes as a recluse behind a curtain, like a crazed Wizard of Oz who comes out to address his public, quite charmingly, only when dire circumstances demand it. Nevertheless, Beatty’s film never gets to the root of Hughes, nor Frank and Marla for that matter.

An admirable failure, Rules Don’t Apply looks sharp, as Caleb Deschanel’s lensing captures the romantic sheen of yesteryear’s Hollywood. The production design and costumes give off a radiant glow, but the editors refuse to let the audience enjoy it. Beatty’s film seems to exist in a frantic headspace and resists any significant dramatic pull, largely because of the consistent barrage of cuts that would make Michael Bay proud. But more even than the patchy editing, Beatty’s farcical approach to his subject, combined with an unconvincing love story, present an irregular mess. Rules Don’t Apply may be disguised as a cautionary tale with latent themes about the temptation of riches corrupting youth and leading them astray, but Beatty’s lofty ambitions for this project are undone by the story and presentation’s general unevenness.