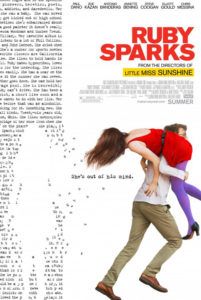 There’s a scene in Ruby Sparks where the film elevates into something more than the romantic fantasy it appears to be. Using the Greek Pygmalion myth as inspiration, this first script by playwright Zoe Kazan features a moment where the sculptor loses himself in the power he has over his creation. Here the sculptor is replaced by Calvin, a J.D. Salinger-esque author played by Paul Dano, and his eponymous creation (Kazan) is one of his literary characters that amazingly comes to life. When he writes something about Ruby, by design she must comply. Nevermind how or why. It just happens. He’s written her to be the love of his life, the perfect companion for his introverted, antisocial self. Inevitably, he must explain to Ruby that he can control her, and then demonstrates this through a humiliating series of written orders to which she has no choice but to obey. It’s an ugly, painful scene, and enduring it opens up all manner of deeply emotional and existential questions about our quasi-Frankenstein protagonist.

Knowing that such a scene exists within the film, it might surprise you to know that Fox Searchlight has advertised Ruby Sparks as a pleasant romantic comedy, the much-anticipated second feature from the husband-and-wife directing team Jonathan Dayton and Valerie Faris, who made the indie darling Little Miss Sunshine in 2006. Certainly much about their film has comic whim embedded into its fanciful scenario; however, more substantial than the hints of humor are the film’s insights on the author’s creative process. The like-themed Stranger than Fiction (also 2006) considered similar ideas from the character’s perspective, whereas Kazan’s screenplay offers grander revelations for Calvin than for Ruby. At first the creation remains, rightly, something of an oddity—merely a thing-that-was-created, until Calvin begins to see her as something, nay, someone more than an object under his control. But I’m getting ahead of myself here.

When the film opens, Calvin has struggled with writer’s block for a decade following his first book, an acclaimed “American classic” published when he was just 19. But aside from intermittent short stories, Calvin has been unable to find a subject for a new novel. A devoted loner, he spends his days in solitude, kept company only by his dog, Scottie (named after F. Scott Fitzgerald). Occasionally he sees his brother (Chris Messina), and even rarer still he visits his bohemian mother (Annette Bening) and her longtime lover (Antonio Banderas). His therapist (Elliot Gould) suggests a small writing project, and through this assignment Calvin begins to explore a recurring dream he’s been having about the fictional Ruby Sparks, the “girl of his dreams” as it were. The writing project takes off and Calvin finds his block has been lifted. What’s more, he’s beginning to fall in love with the character he’s writing. But then one morning, Ruby appears in his kitchen in the flesh; moreover, she’s seemingly aware of their relationship, which up to this point has only existed on paper. He’s even more shocked to discover that she’s not some figment of his overactive imagination; other people can see her too.

A lot of fun is had in the discovery phase. To test his power over her, Calvin and his brother experiment. Calvin types out that Ruby is fluent in French All at once she begins prattling on in a language they don’t understand. After changing her back to English, Calvin locks away his manuscript to preserve her current state as “the perfect girl”, complete with personality traits that Calvin finds charming and will suit his current lifestyle. Indeed, he has constructed a fully formed individual with a unique personality of his design; thus, he finds it effortless to fall in love with her. He never takes advantage in the ways his sex-obsessed brother wants him to, and he finds himself utterly happy for the first time since a bad breakup years ago. Still, after their “honeymoon period” runs its course, Calvin discovers that his expectations for his ideal woman are the stuff of fiction, unrealistic and the product of someone who doesn’t know himself or what he wants. He expects her to need the same kind of isolation he requires, but he’s written an independent and extroverted character. He wants utter devotion, but he’s written an impulsive, energetic personality. Ruby’s persona breathes and grows in ways Calvin hadn’t anticipated, and slowly the contradictions he’s written drive the two on diverging paths. Feeling the ache of loneliness again, he’s tempted to change his original creation with disastrous results.

Less a love story than a character study of, as suggested, a Frankenstein figure, Ruby Sparks weighs Calvin’s writerly desires over the reality of life. Dano, who excels at playing complicated and quirky roles, and who starred as the unspeaking teen in Little Miss Sunshine, develops yet another character both nuanced and filled with inner complexity. He’s an unlikely romantic lead, but then this film is far from a typical romance. It’s doubtful the next rom-com starring Sandra Bullock or Ryan Reynolds will contain a protagonist as distastefully selfish as Calvin. But then, the character never goes too far as to be irredeemable. And then there’s Kazan, Dano’s real-life girlfriend, who plays Ruby with enough personality that we never question her existence. She’s not doing Kelly LeBrock in Weird Science here; Ruby becomes a flesh-and-blood human being that we see as legitimate long before Calvin does. In turn, this is what makes the scene mentioned in the first paragraph so difficult to bear. Both disturbing and saddening because Kazan has brought Ruby to such effervescent life, to see her reduced to a piece of fiction again is heartbreaking.

Ruby Sparks drastically shifts tones and takes dramatic avenues one might not expect, offering more substance than other romantic comedies with integrity (such as, say, (500) Days of Summer). Entertaining, very often hilarious, but also far more unconventional than any romance in recent memory, it’s a film that challenges audiences in a cheery style that’s also capable of great darkness—in ways that will feel familiar to fans of Little Miss Sunshine. The film’s first half reels us in with lighter romantic airs, and slowly Calvin and Ruby develop facets in their relationship that take us into rather bleak territory in the second half. But Dayton and Faris never dive too deep into dark waters, nor do they lose themselves in the potential silliness of the concept. Their tone is pitch-perfect and delightfully balanced, yet post-modern and endearing enough to keep moviegoers interested and invested in these characters, real or otherwise. The setup may be ancient in origin, but the treatment is sophisticated, beguiling, insightful, and brimming with charm.