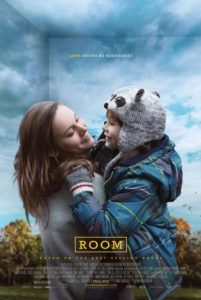 Locked in a soundproof shed for seven years, the character played by Brie Larson in Room lives each day alongside her five-year-old son Jack, the offspring of her unnamed captor, whom she calls Old Nick. Forced to endure no end of solitude and unimaginable (and fortunately unseen) trauma, Larson’s character must protect Jack by shaping the world around him, explaining it’s no bigger than their room. The truth would be impossible for a child to accept. But eventually, the mother and child are liberated from their confinement. Imagine it—growing up with no concept of anything but a prison, and then suddenly being thrust in the whole wide world. Irish director Lenny Abrahamson last considered the psychological implications of prolonged confined spaces in Frank, a fictionalized story based on indie-rocker Chris Sievey, who performed as alter ego Frank Sidebottom and wore a papier-mâché head. In both cases, Abrahamson offers a powerful range of emotions and formal craft to achieve something unique, and filled with raw feelings and tenderness.

For Room, Emma Donoghue adapted her celebrated 2010 novel into a somewhat minimalist script, where the viewer must discern the meaning of a given scene by watching and listening. Donoghue’s book and prose adopted the perspective of the story’s five-year-old protagonist, who lives in a 10-foot-by-10-foot interior world with his mother. From this outlook, his life isn’t claustrophobic or frightening because it’s the only world he’s ever known. Reading his story, or watching as a viewer of the film, is an aching for our awareness within his obliviousness. Production designer Ethan Tobman constructs the grubby soundproof room, while cinematographer Danny Cohen uses his widescreen frame and the set piece’s removable floors and walls to get evocative close-ups and dynamic angles in the confining space. And from the protagonist’s point of view, this cramped area feels huge and expansive, even though it’s clearly an enclosed prison to which Jack and his mother have been confined. Watching Room on these dual levels, at once through Jack’s eyes and our own, is challenging in the best ways.

Youngster Jacob Tremblay plays Jack, who lives with his mother Joy (Larson). He calls her Ma. Everything has an article-less name in “Room,” his name for their home. The sink is called Sink, the table is called Table, and so on. There are no windows in Room, just Skylight, outside of which is Outer Space as Jack understands it. Jack and Ma, their hair overgrown and their clothes dingy, live a simple routine: they exercise, play games, bathe, and read books. There’s a routine for nighttime too. Ma puts Jack into his bed inside Wardrobe, where he’s told to sleep. Then Old Nick (Sean Bridgers) opens the security-coded door in Room, drops off supplies, takes off his clothes and makes some curious, muffled sounds with Ma, and then leaves again. Of course, Room’s audience knows exactly what just happened, but Jack remains none the wiser. Although about six years ago Old Nick gave Joy a reason to live by giving her Jack, the conception was just as ugly as these nightly visits.

Less ponderous than Donoghue’s book and less exclusive to Jack’s subjectivity, the film nonetheless offers occasional narration where Jack explains his beautifully, if painfully innocent perceptions about his small world. This voiceover could be heard like a dream, but instead the filmmakers commit so fully to Jack’s discernments that they feel strangely ethereal. His understanding of TV and everything on it as an unreal construction, for example, informs his notion that other people, animals, trees, and so forth are all fake. At the same time, Abrahamson’s frame lingers on Joy and the wall she must keep up to preserve her son. Eventually, she plots an escape, but that’s not where the film ends, even though your typical kidnapping thriller would construct the story’s climax around the escape. The film’s devastating second half considers how a woman held captive for seven years copes with the outside world again, while her ever-sheltered son finds that there are so many wonderful things to discover outside of Room. The boy must learn about things we take for granted, such as light and the cosmic variety of objects and spaces around him.

Rather than spelling out every emotional formation by punctuating it, Donoghue adopts Jack’s perspective and watches adults behave in seeming inscrutable ways. At their first family dinner in seven years, things come to a head. Joy’s mother (Joan Allen) has remarried to Leo (Tom McCamus), but her dad (William H. Macy) sits with them, and he has trouble looking at the progeny of his daughter and her kidnapper-rapist. The tension is palpable, but that doesn’t mean Jack is aware of why. Larson’s damaged fury in these scenes is understandable, while also hinting at her character’s post-traumatic stress disorder. Her range here is incredible, offering a performance that echoes motherly concern in a wide array of behavior, from her rage to protect Jack from Old Nick to her (however misguided) defense of Jack from her parents. Larson’s multilayered portrayal is unbelievably good in scenes inside Room, as Joy at once protects her son, understands her status as a captive, tries to maintain a positive relationship with her son, and grows frustrated with her child as any parent would if locked in a small room with them for a period with seemingly no end.

Another revelation is Tremblay, whose performance somehow captures Jack’s innocence and openness to the world once released. At first, he’s timid and ever by his mother’s side. He won’t play with the mounds of toys he’s been given because he’s never had them, and therefore never needed them. Before long, he’s trusting people other than Ma. Children are resilient little creatures, after all. Soon he’s sitting with Leo at the kitchen table, munching on cereal, or allowing Grandma to cut his hair. These scenes reminded me of the children from The Night of the Hunter and their eventual arrival at a safe have; indeed, this critic’s waterworks started the first time Jack gets to pet Leo’s dog, an animal he thought only existed as his imaginary friend named Lucky in Room. Tremblay’s curious, expressive eyes and flaring nostrils contain every complex emotion going through his head. And whether it’s a testament to the young actor himself or Abrahamson’s ability to direct children, the performance is nothing short of brilliant.

Unlike the powerful finale in Frank where some sense of understanding comes from the heartwrenching performance of the band’s song, Room’s dramatic climax takes the form of acceptance. Joy must accept that her youth was stolen from her, while Jack must allow himself to accept a whole new series of sensory experiences—each portrayed with fascinating detail and formal novelty. Room never grandstands to overstated dramatic revelations or unrealistic catharsis; it tells an affecting story through the three-dimensional emotions of its characters, but not by spelling out each emotion through expositional dialogue. The depths of our imagination are forced to consider the extent of Joy and Jack’s misery and later healing. In that sense, Room requires an emotional engagement and human sympathy from its audience like few other dramas of recent memory.