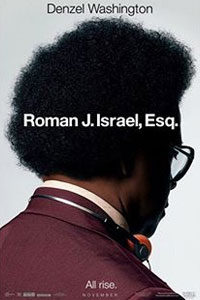 Denzel Washington’s iconic onscreen persona gets a makeover in Roman J. Israel, Esq., a film with a lot on its mind, but a messy way of communicating those ideas through narrative. Washington’s commanding presence has given us memorable characters abound—from Malcolm X to a bombastic dirty cop to a self-destructive pilot. Each of them remains defined by the actor’s unmistakable mannerisms, which carry a familiar pitch that we recognize and love. He has that indefinable movie star quality that has made him a legend, a quality that marks each performance with a certain identifiable uniformity, despite his varied number of roles. Roman J. Israel, Esq. is an absurdly titled (bordering on Gigli-level) legal drama and character study that also censures a culture that casually disregards human rights as inconvenient—in the courts, on the streets, and in our hearts. However noble the film’s intentions, the material receives a muddied and unclear treatment from its director and star. Washington’s performance, much like the entire film, which was written and directed by Dan Gilroy, prove sincere yet obvious, impressive but disappointing.

Gilroy made his debut in the surreal nocturnal underworld of tabloid journalism with Nightcrawler (2014)—featuring a performance by Jake Gyllenhaal that will go down in film history as one of the most grossly overlooked of all time. Gilroy’s assured hand in that film seems less certain in this sophomore effort, where he tackles large issues such as the twenty-first century’s moral bankruptcy, corporate inhumanity, and greed that have replaced the desire for social justice of recent generations. With a firm place on the autism spectrum, Washington’s Roman Israel (who introduces himself with the full “Roman J. Israel, Esq,” describing his title as “better than a gentleman but not quite a knight”) has worked in the same modest law office for decades. Roman’s longtime partner handles the courtrooms and clients, while Roman, with his encyclopedic memory and total recall of facts, figures, and legal precedents, serves as the practice’s back end and paperwork. With an uncontrollable compulsion for blunt truth and a generally unpresentable appearance (he sports an impressive Afro, wide-rimmed glasses, and mismatched components of a three-piece suit), Roman cannot be trusted despite himself. He seems to exist in the seventies, a time when the battle for civil rights was more urgently fought through activism in the courts. Ever since, Roman has kept himself busy accumulating an iPod and vinyl inventory of R&B, soul, and funk classics.

When his partner dies, Roman needs money and reluctantly takes a job with his partner’s former student, George (Colin Farrell), a sharp and successful, but not unsympathetic, representation of a modern lawyer. Well aware of Roman’s fussy and dated tendencies, George also sees his potential. Roman’s life is quickly turned upside-down. He befriends Maya (Carmen Ejogo), who operates a civil rights activism non-profit. He’s also forced to work directly with clients and dress in professional attire. In short order, Roman, who normally retreats from the world, is thrust into it and tempted by moral boundaries that can be crossed without much effort. He’s tasked with defending an innocent young gang member (Niles Fitch) arrested for murder. The client wants to make a deal, promising to turn in the shooter, a fellow gang member, if his sentence is reduced. When his client is killed in prison, Roman, who was privy to the shooter’s identity, uses that information to secure himself a cash reward of $100,000—a choice that never feels adequately motivated by the character. He’s quickly corrupted by the allure of money and goes on a spending spree, though his purchases do not go unnoticed.

Once again, Gilroy shoots on location in Los Angeles, mostly during the day, capturing the city’s concrete grayness, silver skyline, and smog. Robert Elswit, a longtime cinematographer-collaborator with Paul Thomas Anderson and George Clooney, shoots the film in rich, textured light that makes even this film’s modest, everyday settings feel dynamic. John Gilroy’s staccato editing style also lends the film more energy than it really has, narratively speaking. Elsewhere, the soundtrack may be Roman J. Israel, Esq.‘s best feature, containing songs by Eddie Kendricks, Funkadelic, The Jimmy Castor Bunch, and more recent material from Donald Glover. But Gilroy’s script fails to commit to the character study or the poorly handled thriller elements (Will Roman get caught? Will gang members realize how he’s gamed the system to collect the reward?), resulting in an escalating unevenness during the second half. The supporting cast is generally good, with Farrell and Ejogo providing solid two-dimensional roles.

Washington does the best he can with his scattered character, though it’s difficult to imagine anyone making Roman believable. Along with a conspicuous gap in his teeth and mannered, stagey stuttering, there isn’t a moment that goes by where we cannot see Washington acting—as opposed to embodying the role. This suggests that, for perhaps the first time, Washington isn’t comfortable with the character, or Roman’s forced ticks and fastidiousness; although, his frequent diatribes, which stem from his inability to see in shades of gray, are performed with the actor’s usual energy. The film is structured so that we follow Roman emerging from his shell to find himself out of date, obsolete, and unable to understand contemporary identity politics (as demonstrated by two modern women who find Roman’s politeness gendered and sexist, and it is). As he tries to modernize, he learns just how corruptible the world can be. Gilroy’s lesson results from his character’s journey that means well, but the whole thing proves too disjointed and preachy to be effective.