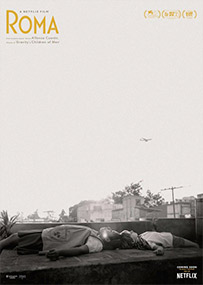 With the soul of Italian Neorealism, the autobiographical timbre of a Federico Fellini reverie, and the controlled aesthetic showmanship for which its director’s work is renowned, Alfonso Cuarón’s Roma is a profound human document and astounding demonstration of high-art filmmaking. Cuarón articulates his most personal memories in a loving ode to his real-life nanny, and in doing so, he achieves a level of cinematic purity rarely seen in filmmaking since the height of the European arthouse scene in the 1950s and 1960s. Watching Roma, you witness a Spanish-language social drama shot in pristine black-and-white, and you notice the self-conscious camera movements—how they glide about the setting in Cuarón’s regular use of ornate extended shots, how they contain symbolism and comment on the larger dynamics of the most intimate scenes. It’s not a work of realism in the verité sense, though its subject matter gives a forgotten and often dejected class an elegantly crafted and authentic showcase. Roma is the sort of film described as life-affirming without irony or pretense, as it reminds us of the potential for love, frailty, and unbreakable bonds between people.

Situated in Roma, a bourgeois district in Mexico City, around 1970, the film draws from Cuarón’s experiences growing up in that neighborhood. He told Variety in a recent interview that he was oblivious to the political, racial, or social conditions unfolding around him. The son of a United Nations scientist, Cuarón grew up in a cosmopolitan city and remained unaware of the past hardships experienced by his nanny, Liboria “Libo” Rodríguez, who grew up impoverished in a small village in Oaxaca. Libo was always there in Cuarón’s childhood, taking care of him, and eventually sharing stories about her former life. Before long, the young artist learned more about his country and the sociopolitical forces at work. Libo, an indigenous Mixtec still going at 74, belonged to a lower class in Mexican society than those of Cuarón’s higher class Spanish descendants, many of whom maintain deep-seated prejudices against the natives. When contemplating his past later in life, Cuarón thought back on Libo, her role in his family, and many of the events, both painful and heartwarming, that shaped his childhood—from the tales of Libo’s experience to his father leaving the family when Cuarón was just ten years old. It’s all woven into Roma, a film that refuses to spell out its autobiographical significance, even as it rewards those willing to dissect the material to discover that dimension. 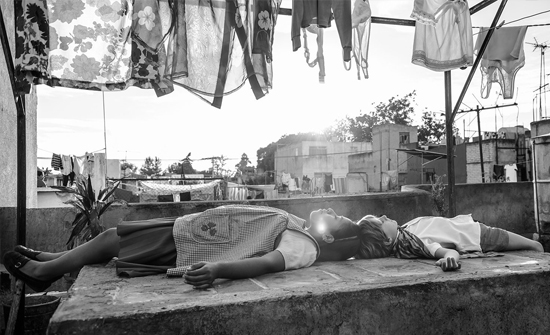 Newcomer Yalitza Aparicio plays a fictionalized version of Libo, named Cleo, who works alongside Adela (Nancy García) in the privileged household of Sofia (Marina de Tavira) and her doctor husband, Antonio (Fernando Grediaga). Cooking, cleaning, and tending to four children, Cleo and Adela nonetheless exist in a separate world from their employers. They speak to each other in Mixtec, a language the family cannot understand; their quarters are distanced from the rooms of the family members. And yet, every night when Cleo puts the children to bed, they don’t say “goodnight.” They say, “I love you.” The children seem to understand what the adults—including Cleo herself—do not, that Cleo is very much a member of the family. In the early scenes, we see Cleo and others of her underclass taken for granted, if not unseen—but then “underclass” is an ironic term, given that many of her duties are carried out on rooftops adorned with clotheslines, a space almost exclusively reserved for servants. Inside the home, the adults acknowledge her only when a need arises. Sofia angrily orders Cleo to clean up dog waste when Antonio mentions it, and she’s blamed when a child overhears a marital spat through a closed door. Nevertheless, she endures, rather stoically, for fear of losing her job and having to return to her poor village.

Beyond an appreciation of Libo or an acknowledgment of the disregarded servant class in most cultures, Roma is a testament to female endurance. At one point, Sofia, fed up with her now-estranged husband, approaches Cleo and says, “No matter what they tell you, women: we are always alone.” It’s a lesson that Cleo learns after a single date with Fermín (Jorge Antonio Guerrero), a wannabe martial artist who, in a kind of mating ritual, practices his routine in the buff, using a shower curtain rod as a bo staff. Several weeks after the encounter, her first, Cleo learns she is pregnant. Sofia’s reaction is a surprising display of sympathy, perhaps because her own marriage to Antonio is crumbling. The solidarity between these women that emerges, or is revealed as a result of Antiono’s betrayal, leads to the film’s most heartening moments. But as Roma proceeds, ambling through small domestic scenes and social observations, it never loses Cleo’s marginalized perspective, which is gradually absorbed into the familial whole. Even when Cuarón sets the unfolding human drama against the Corpus Christi massacre of June 1971, where Mexican soldiers killed more than 100 student demonstrators, the sequence is devoid of political context or detailed explanation. Rather, Cuarón uses the event as a reflector of Mexico itself, as Cleo’s sudden descent into labor ultimately ends in tragedy. Roma has a way of making small things about much bigger things.

Cuarón’s early films crackled with energy and imagination, and a stylistic fluidity that enlivened well-treaded material. His debut, Sólo Con Tu Pareja (1991), a sexy comedy on par with Pedro Almodóvar’s airy but grim farces, marked his first of many collaborations with cinematographer Emmanuel Lubezki. Together, Cuarón and Lubezki brought new life to the children’s novel A Little Princess in 1995 (although today it suffers from subpar special FX). They reinvented Charles Dickens’ Great Expectations in 1998, making Ethan Hawke’s Pip into an angsty New York painter. Cuarón became a name to know by 2001, when Y Tu Mamá También, the complex tale of a road trip between two horny friends and the woman who joins them, turned into a sensation that established a bridge to the mainstream. That bridge led to the best of the Harry Potter films, The Prisoner of Azkaban (2004), a sequel of life-sucking Dementors, Buckbeak rides, werewolf-fighting, and time-traveling—all shot like a megabudget arthouse release. Children of Men (2006), a dystopian journey that becomes more relevant with each passing day, is perhaps his finest achievement. Whereas, in 2013, the space-flight-gone-wrong crowd-pleaser Gravity earned Cuarón and Lubezki each Oscars. 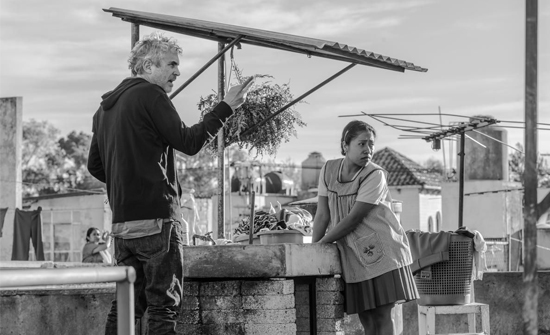 Alas, Lubezki’s busy schedule meant that Cuarón was forced to move ahead on Roma without him and, similar to the director-cinematographer duties performed by Paul Thomas Anderson on last year’s Phantom Thread, Cuarón himself went behind the camera. Anderson and Cuarón demonstrate their visual acuity and control in their respective efforts, although comparisons between Cuarón’s style and Lubezki’s will undoubtedly be made. Both guide the frame around interiors and exteriors in elaborate, sometimes flashy, often symbolic ways; both employ long takes, sometimes artificially extended by digitally removing the cut, sometimes achieved with sheer audacity. One also cannot help notice in Roma familiar visual motifs from, say, Children of Men. They each have intense scenes of a woman giving birth in a chaotic backdrop, each stops amid social disorder to observe a wailing woman who cradles a dead man, each has significant scenes at the ocean, and each features the phrase “Shantih shantih shantih”—a message of lasting peace from the last line of T.S. Eliot’s “The Waste Land.” Thematically, Roma bears much in common with Y Tu Mamá También, in that both use personal stories set against the milieu of political upheaval as evocations of Mexican class disparities.

Detractors often accuse Cuarón of using all-too-palpable visual metaphors, citing his apparent need to pinpoint the meaning of a scene in a precise, symbolic moment, figurative parallel, or visual juxtaposition. Such poetic flourishes, enhanced by the black-and-white photography throughout, have a place in Roma; though, only those adverse to thoughtful, expressive filmmaking may hold them against the film. Note the opening shot of water spreading across the garage tiles as Cleo washes away the dog feces. In the reflection, an airplane flies overhead, a million miles away—the presence of the plane appears throughout the film, including the final shot, reminding the viewer of our protagonist’s isolated world. A journey to a New Year’s party hosted by Sofia’s hip friends is contrasted when Cleo goes searching for Fermín in a dusty, ramshackle village. Similarly, Fermín, much like Antonio, will become an absent father, establishing the connection between Cleo and Sofia’s experiences with men. This is all to point out that Cuarón’s film is loaded with a thoughtful visual and thematic treatment, avoiding an art-for-beauty’s-sake approach. Instead, he delivers a highly readable intertextuality that one predicts will only grow and tighten with repeated viewings.

Cuarón has made a superb, humanizing film that occupies a poignant subjective perspective—and thanks to its worldwide distribution on Netflix’s streaming platform, along with a limited theatrical run to qualify it for the coveted Academy Award, a film of modest commercial ambitions can be seen instantly by millions. Many critics associations and film festivals—including those in Venice, Telluride, and Toronto—have already acknowledged the refinement and relevance of this deeply personal work of art. But it’s doubtful most will engage with Roma on the same particular level as Cuarón. How could we? His experience with Libo was so specific and personal. Even so, Roma is a film that engrosses the viewer with its pristine filmmaking, drawing us into Cleo’s world with such formal detail and exquisiteness that identifying with her is almost mandatory. The empathetic powers of cinema are at their best and most human here, offering audiences a chance to see through the eyes of a class and perspective seldom represented with such technical virtuosity, personal sincerity, and profound intimacy on the screen.