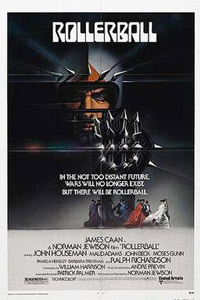 Like many paranoid thrillers and dystopian science-fiction stories of the 1970s, Rollerball is a metaphor for the decade’s widespread mistrust of political and cultural systems. If there was a predominant theme used by New Hollywood filmmakers such as Steven Spielberg, Brian De Palma, George Lucas, William Friedkin, and others during this era, it’s the idea of the individual fighting against an oppressive or corrupt system. Although films from Jaws to Star Wars have been interpreted in largely political contexts, for these filmmakers there was a more urgent example of the little guy getting trampled by figures of authority—the battle of the auteur against the corporate interests in Hollywood.

Rollerball’s director, Norman Jewison, was fed up with the commercial-mindedness of Hollywood at the time. The studios were already beginning to take back control from the auteur directors who emerged in the late 1960s and early 1970s. Originally hailing from Canada, Jewison saw the writing on the wall. He left Hollywood altogether when he went to shoot Fiddler on the Roof in Europe, and he resisted coming back to the U.S. for several years. Rollerball was shot almost entirely in Europe as well, and then distributed by United Artists. For Jewison, the film’s cynicism toward the corporate interests that were gradually taking over in the 1970s was precisely the statement he wanted to make.

The film resembles something like The Hunger Games saga, as it takes place in the distant future after the much-alluded-to Corporate Wars. The interests of large companies dictate how people live, and everyone is kept complacent because they’re too busy being obsessed with Rollerball. It’s an elaborate, violent game that entails two teams on roller skates and motorcycles battling it out on a roulette-wheel-like course to acquire a metal ball and place it in a goal. Intense, cohesive editing makes the rollerball segments exciting and brutal experiences. They’re appealing to the same extreme as watching men in the NFL subject themselves to concussive blows every Sunday.

James Caan plays Jonathan, the longstanding champion of this sport, which is changing. The corporate interests, headed by John Houseman, want Jonathan to retire. They designed the game to reinforce the notion of team success, which in turn aligns people with the interests of the all-powerful Energy Corporation. But Jonathan’s legendary performance in the Rollerball arena suggests that greatness can be reached through individual achievement. When he refuses to retire, they devise a “no penalty” rule to the game, whereby players are allowed to murder each other. Their plan to let the game simply extinguish Jonathan’s individuality (i.e. life) is thwarted when he proves single-handedly victorious.

It’s not difficult to see why Jewison identified with the material. Jonathan is clearly a stand-in for a director fighting against the Hollywood system, struggling for his love of the game or, in directorial terms, his auteuristic vision against the money-minded demands of the studios.  The obvious, oftentimes heavy-handed dialogue doesn’t bother trying to disguise its message (“This game was created to demonstrate the futility of individual effort, and the game must do its work!” says Houseman), and the sheer amount of 1970s-ness, complete with a corny vision of the future, is abundant here. But the themes, combined with Jewison’s passionate F-U to Hollywood, make Rollerball engaging stuff.