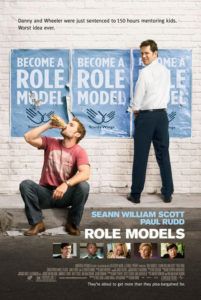 Something strange happens around the midpoint of Role Models. Formulaic plotting aside, you begin to care about the characters. Why does this happen? Shouldn’t we be immune to buddy movies strictly following a blueprint we’ve seen dozens of times before? Producer Judd Apatow proved with Forgetting Sarah Marshall and The 40-Year-Old Virgin that common recipes can be innovated upon and remade as relevant, but then again, Apatow’s overexposed name is nowhere on this production. Wouldn’t you know it; other people can make genial R-rated comedies with a heart too.

Misanthropic loser Danny (Paul Rudd) is having a bad day. He gets dumped by his lawyer girlfriend (Elizabeth Banks) over his narcissistic attitude, fired from his job as an energy drink spokesman, and drags his coworker friend Wheeler (Seann William Scott), always enthusiastic and optimistic much to the annoyance of Danny, along for the ride down the spiral. Assigned to 150 community service hours, their time is spent in the buddy program Sturdy Wings, mentoring children under the watchful eye of a formerly cocaine-addicted program director (the hilarious Jane Lynch).

Enter the Little to Danny’s Big, a nerdy fantasy enthusiast named Augie Farks (Christopher Mintz-Plasse, best known as McLovin’ from Superbad), who spends his weekends in a Dungeons & Dragons-type role-playing game where adults and teens alike bat each other with foam swords and speak in pseudo-Middle English tongue. Danny’s not really interested; he just wants to get through his court-mandated hours. Meanwhile, the sex-obsessed Wheeler is appropriately assigned to potty-mouthed problem child Ronnie (Bobb’e J. Thompson), who quickly learns Wheeler has many lessons to offer in the art of “boobie-watching.”

Much of the film concerns Augie’s medieval fantasy game, which takes place in a park and renders the participants in homemade armor. The villain would be King Argotron (Ken Jeong), who, topped with a plastic crown and infinite smugness, takes his position too seriously. It’s astounding how involved we become when Danny, Wheeler, and Ronnie join Augie’s team and thwap-away with foam battle gear. I imagine the emotions we feel as viewers are no different than those when viewing Braveheart or Gladiator, rooting for those select few heroes among a mass of screaming combatants, here wielding floppy weaponry instead of sharp replicas.

The plot plays out as you might expect, with Danny and Wheeler realizing these two kids need mentoring, thus the adults finally become adults for the sake of the children. Lessons are learned. Laughs are had. But the unique aspects originate from the acting troupe assembled by director David Wain, who wrote the film along with Rudd. Familiar faces from MTV’s great 1990s sketch comedy show The State, Comedy Central’s Reno: 911! and Stella, and the films The Ten and Wet Hot American Summer populate the cast—names like Kerri Kenney, Joe Lo Truglio, Matt Walsh, Ken Marino, and others attuned to improvisational and random humor.

Stealing the movie from the veterans are Mintz-Plasse and Thompson, two performers we’re likely to see more of in the coming years, or until they reach that awkward growth stage and become another Macaulay Culkin. In the latter case, with the twelve-year-old Thompson, we actually grow somewhat concerned that his parents would sign their child up for such a graphic role. This kid unleashes every swear in the book like a pro, but also delivers lines like “You white, then you Ben Affleck” with impressive comic timing.

You know what’s going to happen. The dudes find equilibrium between their dudeness and their maturity, realizing that dudes don’t have be such dudes all the time. Saying Role Models has heart would be accurate, though I’m recommending this title based on the film’s ever-constant stream of laughs, and their guiltless nature. Its compassion for the characters helps diminish that post-film residue that sometimes clings to the viewer after a dirty comedy. There’s nothing to feel guilty about; the result is genuinely hilarious and sweet enough to justify.