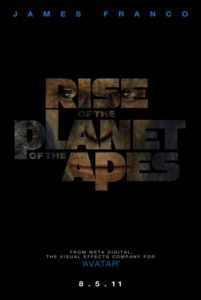 In Planet of the Apes lore, “Caesar” was the historically ironic name of the original smart ape who led the uprising against humanity, causing our planet Earth to become the “Planet of the Apes”. His origins detailed in the sequels to original 1968 film, from Escape from the Planet of the Apes through Battle for the Planet of the Apes, are inconsistent. And they’re different again in Rise of the Planet of the Apes, which, much like this summer’s X-Men: First Class, presents another hard-to-define entry in an ongoing Fox franchise. Part reboot, part prequel, the film follows Tim Burton’s lackluster attempt to reboot the cult series in 2001, and instead starts at the beginning where it re-imagines the whole uprising scenario with astonishing dramatic strains and impressive CGI special effects.

Rather than a human actor like Roddy McDowall under a rubber mask, Andy Serkis performs as Caesar through motion-capture technology, in the same manner he did as the titular ape in Peter Jackson’s King Kong remake and Gollum in Jackson’s The Lord of the Rings Trilogy.  The story is set in present-day San Francisco, where scientist Will Rodman (James Franco) tests a drug that, if successful, will cure Alzheimer’s disease. In a corporate facility, Will carries out animal trials on chimpanzees with the utmost care, a side-effect to his drug being increased intelligence. One such smart-chimp causes a ruckus in an early scene and gets Will’s entire operation shut down. In the aftermath, Will discovers that the trouble chimp, who is “destroyed” along with the other subjects, was merely protecting its newborn child, which Will secretly takes home where he lives with his father (John Lithgow), an Alzheimer’s sufferer. Over time, Will learns the baby chimp inherited its mother’s genetically-altered super intelligence. He is named Caesar.

As years pass and Caesar grows into adulthood, he can understand Will’s speech and responds in sign. Physically and developmentally he is superior to a human of his age, but his impressions of the world become more complex. Evoking turns in Mary Shelley’s Frankenstein, Caesar begins to understand that although loved by Will, he is not treated as an equal and in fact is an outcast. And after an act of protective violence lands him in a temporary “sanctuary”—where Ceasar and dozens of other apes (chimps, orangutans, and gorillas) are caged and mistreated by cruel handlers (Brian Cox and Tom Felton)—Caesar seeks to defend ape dignity by leading a rebellion. Screenwriters Rick Jaffa and Amanda Silver tell the story from Caesar’s perspective more than the comparatively uninteresting humans, and therein force audiences to witness the lows of animal cruelty and in time cheer when Caesar exacts his thrilling revolt. The film is an animal-rights activist’s dream, condemning animal drug testing and veritable animal prisons that treat these intelligent beings like, well, animals.

But more than the film’s structure or political condemnations, the reality in which Serkis and the animators place into Caesar is staggering, and aligns the audience’s sympathies not only with a non-human, but with a computer generated animal. In Serkis’ almost silent performance there is depth beyond which most actors ever achieve, and it builds upon his already monumental work in King Kong. There is justified talk of an Oscar nomination. All around, scenes of all-CGI apes (“no animals were harmed in the making of this film”) who at first are discordant, and then slowly merge into one unstoppable force, couldn’t be better. If only the human performances were equally as compelling. Franco does a fine job in his role but never astounds, while his character’s veterinarian girlfriend (Freida Pinto, from Slumdog Millionaire) is underused. Standouts are Lithgow’s committed performance as a fading Alzheimer’s victim, Cox’s slimy presence as the ape prison warden, and Felton channeling Drako Malfoy with an American accent.

Unless you’re a fan of UK prison dramas, you’ll be unfamiliar with Rupert Wyatt, the director of this film and previously The Escapist, which also featured a leathery performance by Cox. Given a minor tentpole, Wyatt proves himself capable of overseeing a major production, which in many ways shares thematic ties with his previous work. After all, both are about a band of prisoners escaping confinement to freedom. Wyatt handles action sequences and intricate visual effects shots with incredible clarity, and cinematographer Andrew Lesnie lenses them with an artistic eye. At the height of the drama, when the action culminates on the Golden Gate Bridge in a faceoff between apes and human authorities, Wyatt has skillfully immersed his audience in a film that it’s doubtful anyone predicted would be this good. Indeed, arriving in the usual end-of-summer lull, this reboot-prequel-thing earns its place among the most entertaining yet thoughtful blockbusters of summer 2011.

If there’s one major structural flaw with Rise of the Planet of the Apes, it’s that when the film ends, the action feels like it’s just the beginning. The planet hasn’t yet been dominated or even threatened in a large-scale sense, at least not by apes. Of course, our desire for more means the filmmakers have done their job well, recreating a franchise and planting the seed for (hopefully) an inevitable sequel. With plenty of nods to the original film which should please die-hard fans (including references to Bright Eyes, Icarus, “It’s a madhouse!” and “Take your stinkin’ paws off me, you damned dirty ape!”), but plenty of unforgettable moments to confirm new ones, Wyatt has delivered what must be called the best Planet of the Apes film since the original. From a studio whose various franchises (Alien, Fantastic Four, Predator, X-Men, the list goes on) have so often been mishandled and cheapened by commercialism and lack of artistic integrity, here’s a sequel in which strong storytelling balances with sheer spectacle to achieve an unexpected triumph.