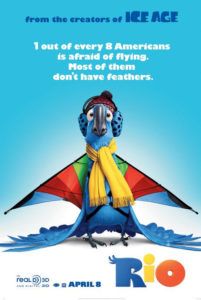 Blue Sky Studios animated and Fox distributed the “family film” Rio, which presents an A-list cast performing a mediocre script by Don Rhymer, based on a story by director Carlos Saldanha, who also helmed Fox’s Ice Age series. Fox can get all the talent they want to provide voices and sing mediocre songs; celebrity voicework hardly makes up for their second-rate narrative and animation that never wows. Moreover, the story contains a suggestive narrative fuelled by rampant innuendo, far too much for G-rated fare. But aside from apparent sexual undertones, this is a children’s film through and through, with lots of pretty colors and butt jokes to entertain the 4-to-8-year-old range. Adults will find little to savor in dialogue overflowing with pop-culture references and stereotypes about South American living, but children will laugh at dancing, brightly colored birds.

The story involves an endangered male macaw named Blu (voice of Jesse Eisenberg) traveling from his safe haven Minnesota with his clingy owner, Linda (Leslie Mann), to Rio de Janeiro, where he will propagate his species with the last known female macaw of his type, Jewel (Anne Hathaway). These are among the rarest birds on the planet, and so human smugglers steal the blue macaws, relying on their trusty Cockatoo-warden Nigel (Jemaine Clement) to keep them under lock and key. Of course, Blu and Jewel escape, at which point Jewel learns that Blu cannot fly. Luckily, a Toucan named Rafael (George Lopez) offers his wisdom: “Flying is not what you think in here [head], it’s what you feel in here [heart].” And guess what, by the end, Blu learns to fly, the music swells, and everything’s going to be okay. Meanwhile, Linda finds herself falling for Jewel’s owner, an ornithologist named Tulio (Rodrigo Santoro), as they search for their birds.

What this plot boils down to is the protagonist’s fear of leaving home and losing his virginity, as punctuated by his status as a Minnesota-raised flightless bird. Being flightless offers a none-too-subtle “erectile dysfunction” equivalent. Only when Blu realizes he’s in love with Jewel can he fly. Hatchlings are sure to follow. The story will probably raise more awkward questions than parents might want to answer—certainly more than this year’s Rango, which so many parents squawked over. Along with a narrative that serves a metaphor for losing one’s virginity, there’s plenty of animated flesh on display, the film taking place in the days before Rio’s Carnival festival. But bird characters translate Rio’s inborn sexuality in their own ways. “Baby got beak!” is one exclamation no parent wants to explain.

Along with hints of sexuality, “shake your butt” humor is prominent; there’s also some mild violence (a bird-villain meets his demise in the propeller of an airplane) and an achingly out-of-date reference to “Whoomp! (There It Is)”. Elaborately choreographed musical numbers transform the proceedings into “MTV Junior”, if there were such a thing. Pop stars like will.i.am and Jamie Foxx provide voices and perform songs they wrote for the movie, most with a Latin flair that keeps your toe tapping. Clement brings his signature humorist style from Flight of the Conchords to Nigel’s song “Pretty Bird”, a musical number that constitutes the most entertaining five minutes of the show. But the songs are too infrequent and uninspired to remember or justify comparison with the great Disney musicals.

Perhaps I’m being overly sensitive about the adult themes throughout Rio. But when movies like this and Mars Needs Moms are overlooked by parents and considered appropriate for all ages, but an intelligent picture like Rango is condemned, it becomes further evidence that America likes their entertainment dumb, and doesn’t mind keeping their children that way either. To be sure, Fox’s theatrical run earned upwards of $150 million domestically and more than double that internationally, proving that when parents see “from the makers of Ice Age” and “showing in 3-D” on a poster, it means the kiddies will sit quietly for 90-minutes. On home video, where parents can leave the room as youngsters are exposed to suggestive content, the release serves its purpose. But compared to loftier projects by Pixar and ILM, Rio is predictable, crude, and substandard animation.