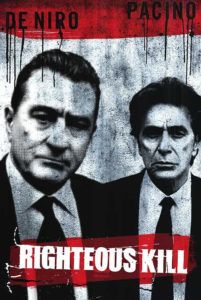 Robert De Niro and Al Pacino. Their output includes some of the greatest performances ever captured on celluloid, achieving the status of legendary, and for good reason: They are talents beyond measure. Could Jake La Motta have been rendered at once conflictingly self-destructive, terrifying, and sympathetic by anyone else but De Niro? Would Michael Corleone have been such a tragic monster if portrayed by another actor? I could prattle off a dozen or more celebrated roles by each, but I won’t waste my time and yours reminding you of their cinematic contributions. This is known.

Righteous Kill makes history because it finally allows these two powerhouse actors to interact at length onscreen. Having previously co-starred in The Godfather Part II without ever sharing screen time, and paired for only a few brief scenes amid the three-hour epic Heat, it’s unfortunate that they’re at last brought together for this, a dreadfully contrived movie, one of the worst for either career. And I’d like to tell you that this cop thriller isn’t all that bad on its own, that with two leads not obviously out of their prime the yarn might work. Alas, no. That De Niro and Pacino both give sleepy performances is only one contributing factor to its failure. The film is a mess.

Veteran NYPD detectives Rooster (Pacino) and Turk (De Niro) strut about bragging about their swinging genitalia; seasoned from years of experience, their overconfidence is staggering. Cracking bad Brady Bunch jokes on their latest crime scene, we see no evidence of expert police work nor are we allowed any window whatsoever into who these men are. Without a glint of energy sparking between them, as partners they seem to be going through the motions just as the actors do, believing that their presence is evocative enough.

But a series of murders perplexes Rooter and Turk, whose names sound more like those from a bad 1980s cop show. Someone, almost certainly a cop, is plugging criminals and leaving cryptic poems to justify their killings. Paired with detectives Perez (John Leguizamo) and Riley (Donnie Wahlberg), another lamentably aggressive duo, the group does what any internal affairs department should be doing and investigates their own. Meanwhile, Rooster and Turk are sent to a police psychologist for beating up a perp, and everyone but his partner seems to believe the emotionally violent Turk is the prime suspect.

Maybe it’s because everyone in this film is excessively (and violently) macho, barking “mutt” at each other like mobsters from one of their respective gangster pictures. And the transparent masculinity portayed onscreen gets really old, really fast. Luckily someone’s always there to hold someone else back during the in-fighting, because every other scene involves an over-played argument or declaration of masculinity. Indeed, the movie drips with testosterone. The closest thing to romance involves Turk’s forensics guru girlfriend Karen Corelli (Carla Gugino), whose tastes for rough sex eliminate the one shred of feminine sympathy this laughably predictable movie allows.

Jon Avnet, director of another Pacino bomb 88 Minutes, takes none of the bold steps made by his forerunners, and seems content in letting his two renowned actors just do their own thing. This amounts to a whole lot of bland acting. No doubt masters like Coppola and Scorsese didn’t trust their art to their onscreen talent, but rather forced out great performances with a strict and visionary push. Avnet seems to push with the weight of a feather; the ensuing performances, and altogether structure of his film, suffer for his lack of vision.

Written by Inside Man scribe Russell Gewirtz, Righteous Kill progresses like a bad piece of fan fiction, trying to incorporate cliché elements from its lead actors’ prior iconic films and recycle them. Instead the performances are tired, with both actors approaching their seventies and unable to reclaim the genre they once defined. Choppy editing and cheesy overlain narration further squander any potential for the film’s success. Given the downright sloppiness of Avnet’s direction, our high hopes that De Niro and Pacino might electrify the screen once again only make the end product all the more disappointing.