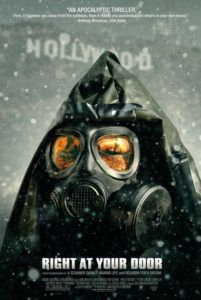 Any American viewer is susceptible to the frightening imagery and aberrant post-9/11 paranoia present in Chris Gorak’s independent thriller Right at Your Door. It begins with “dirty bombs” hitting Los Angeles, creating citywide panic. Toxic ash will soon begin to fall from the sky. Radio and television broadcasts say staying inside and closing your doors and windows when the ash clouds eventually arrive. Brad (Rory Cochrane) is still inside his suburban home when the bombs hit, but his wife Lexi (Mary McCormac) has already left for work, and she’s downtown when the bombs detonate. But a moral question exists: Should Brad seal his house and save himself or wait for Lexi to show? He ventures out to find her, finding that police have blocked all side-streets. He sees a car covered with ash come from the city; the driver, exposed to who-knows-what, tries to run, but gas-masked coppers gun him down. Brad races back home, sealing the house just before an eerie shower of noxious ash washes everything with a layer of gray. Meanwhile, Lexi doesn’t answer her cell.

Radio broadcasts are uncertain of the ash’s effects, so there’s no telling what exposure means. The government broadcasts advise keeping those exposed in an isolated area. Such mandates are of no concern to Lexi when she arrives at the house, coughing and vomiting, banging on Brad’s door to let her in. Their love and trust for one another should be put to the test in these scenes, except Gorak misses the opportunity to infuse interpersonal drama into his picture; instead, he relies solely on aspects of media-fueled hysteria and the government’s failed rescue.

Cochrane and McCormac give sympathetic performances; they just aren’t believable as a couple. Scenes with Cochrane running about his confined, now-sealed home sweating and swollen have an incredible effect, recalling his equally paranoid performance in A Scanner Darkly. McCormac’s scenes on the outside, wailing and desperate to get indoors, disturb the viewer with their realistic terrorist-disaster tone. And yet, Brad and Lexi remain separated by the house, sometimes just a sheath of plastic. Perhaps if the film had shown us how vital their connection was, we might be more impacted by their separation.

Prior to writing and directing this, his first feature, Gorak provided art design on films like Fight Club, Minority Report, and The Man Who Wasn’t There. He has an impeccable sense of visuality, making every frame of limited space active and scary. Occasionally the shot moves to the L.A. skyline filled with smoke and faint fires, like something frighteningly familiar on CNN. Filmed just after the Katrina disaster, the film’s images of panic-stricken survivors resonate as true enough, and it closes with a shocking twist finale that offers harsh observations on uncoordinated disaster efforts.

Made with a shoestring budget, Right at Your Door first screened at the 2006 Sundance Film Festival, where it received a nomination for the Grand Jury Prize, and won for its exciting cinematography by Tom Richmond. And though Lionsgate Films purchased it for $3 million, their distribution didn’t exceed much more than 20 screens nationwide. Indeed, this is a low-budget indie movie, but it has bold ideas, even if it doesn’t see enough of them through to the end.

I was reminded of last year’s thriller Bug, another confined psychological experiment that takes place almost exclusively in a seedy hotel room. As directed by William Friedkin, the story maintained its claustrophobic space as a necessary breeding ground for the schizophrenia inside. Upon comparison, I realize Gorak spends too much time outside of the house, following Lexi about as she makes her last calls to loved ones and finds dead birds about the lawn. Perhaps if Gorak kept his film indoors with Brad, leaving everything outside in the chaotic “contaminated” area a paranoid mystery, the film could have worked toward its palpable Twilight Zone intent. Instead, there’s an entertaining 95-minutes here, even some commendable acting, all leading up to a shocking finale that’s well worth tolerating the occasional slow spot or unfulfilled idea.