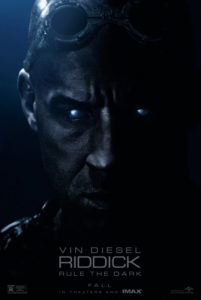 An enjoyably primal spectacle, Riddick has been described as a “franchise reboot” and a “return to form” for writer-director David Twohy and his macho muse Vin Diesel. Together, the two made 2000’s fun sci-fi monster movie Pitch Black and its follow-up in 2004, the overwrought space opera The Chronicles of Riddick. The former was a cult success, whereas the latter bombed commercially, and critically, and was rejected by fans. Both movies followed Diesel’s antihero Richard B. Riddick, a murderer-turned-king who sees in the dark and speaks almost exclusively in growls. Nine years after the failure of the first sequel comes Riddick, which casts away its over-produced immediate predecessor for a smaller, comparatively intimate story. Though the plot’s machinations will be familiar to those versed in Riddick’s previous adventures, this lowered budget territory is exactly where the eponymous character belongs.

Divided into three distinct sections, the movie begins after helping us remember (and also quickly forget) what happened in The Chronicles of Riddick. Marooned on a desolate planet, Riddick is left for dead in the desert wilderness, his body broken. In this engaging first 30 minutes or more, our hero regains his strength and even adopts a puppy—a striped jackal-wolf-thing that serves as his loyal companion later in the story. Fortunately, unlike its predecessors, Riddick doesn’t attempt to portray this ever-heroic character as “evil”, and so his interactions with this scene-stealing CGI canine become, much to our surprise, endearing. Who doesn’t love a good story about the bond between a man and his dog? This fascinating segment contains very little dialogue and concerns Riddick’s re-toughening after his period of weakness as Lord Marshall of the Necromongers (What are Necromongers, you ask? Nevermind, it’s not important). Along with his trusty, man-eating sidekick, Riddick must contend with the planet’s other main species—slimy lizard-scorpion-things that live in the desert planet’s infrequent pools of mud.

Once Riddick and his delightful companion make it onto grassier plains, they’re faced with a new challenge when Riddick sets off a rescue beacon and calls rival bounty hunters to the planet. The first of two “merc” teams to arrive is a ragtag bunch led by Santana (Jordi Molla), a posturing-obsessed wacko determined to put Riddick’s head in a box. The second group, headed by Johns (Matt Nable), is more organized and polished, and they’re content to sit back and watch as Riddick takes out Santana’s crew one by one. But by the end of the second act, both sets of bounty hunters and Riddick must join forces against a common enemy: A massive rain storm brings an onslaught of those aforementioned lizard-scorpion-things. The movie’s rushed last third involves a desperate attempt to escape the planet before everyone’s eaten alive. If this sounds familiar, it should; Riddick teamed with a band of survivors to battle nocturnal monsters in Pitch Black. Here, the night is replaced by rain, but the basic plot is identical.

Given the reported $38 million budget, a low figure for such an ambitious project, the special FX in the movie are appropriately hit-and-miss—just like Pitch Black, in a charming way. For its sadly limited time onscreen, Riddick’s pet companion (designed by Patrick Tatopoulos) makes us forget that it’s a CGI creation; frankly, the movie could have been Riddick and his dog interacting for 2 hours, and this critic would have been pleased. However, other scenes, such as sloppy jet-cycle chases, look inferior and somewhat embarrassing when compared to the superior landscapes and futuristic technology elsewhere in the movie. The inconsistency of the CGI is offset by the undemanding quality of the material, its aspirations no higher than, say, John Carpenter’s equally entertaining Ghosts of Mars. Twohy and Diesel have gone to great lengths to appease sci-fi/horror enthusiasts and regain the support of the franchise’s fans, stretching Riddick’s R-rating (a step up from the decidedly tame PG-13 rating on The Chronicles of Riddick) to its full use with plenty of blood and gore.

But Twohy isn’t merely perpetuating well-made, lowbrow escapism; he’s written some juicy characters and involving situations to bond us to the material. Diesel does what he does best here, leaping and strutting in slow-motion action through moments of badassery. The actor owns the role more than he has in previous entries, further exploring the character’s likable qualities without sacrificing his tough-guy attitude. More fanboy consideration dwells in the casting of Katee Sackhoff, best known as “Starbuck” from the Battlestar Galactica remake; once again, she plays an excellent strong female character who doesn’t take shit from anyone. Molla is efficiently over-the-top as Santana, a character whose comeuppance couldn’t come soon enough, and when it does, it’s worth the wait. And Nable’s role gives Riddick a sufficient full-circle quality as his character bears a connection to the antagonist in Pitch Black. Occasionally the dialogue is laughable, the characters and situations cheesy, but the missteps are forgivable when compared to how much Twohy gets right.

After losing money on the over-budgeted and underwhelming The Chronicles of Riddick, Universal Studios has taken a moderated risk on Twohy and Diesel’s third entry in this franchise by reducing the budget to roughly one-third of its predecessor. Given Diesel’s rejuvenated popularity with the Fast & Furious series, which seems to pick up speed with each new sequel, the studio has resolved to be in the “Vin Diesel business” and will likely see a strong return on their investment with Riddick. It won’t take much for the movie to earn back its budget in theaters and on video, meaning sometime in the next decade, we’ll get a fourth movie, hopefully, more in the vein of Pitch Black and Riddick, or something altogether unique—as long as it’s nothing like The Chronicles of Riddick, fans should be pleased. When Twohy and Diesel get together with limited funds, it forces them to get creative and, as shown here, deliver a higher brand of B-movie entertainment that leaves you wanting more.