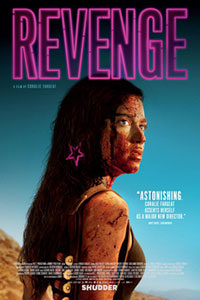 Revenge has been touted as an essential film for the #MeToo and #TimesUp movements, which have given women agency to come forward against sexual assault and harassment, most publically in the entertainment industry. These movements speak out against sexual misconduct and discrimination of all kinds, enable empathy for victims, and often expose predators. French director Coralie Fargeat’s debut film, set firmly within the rape-revenge subgenre, isn’t necessarily a major talking point in the ongoing feminist rhetoric that has come to the forefront of the current cultural conversation. The feature pits a female victim against three male aggressors, and through the character’s transformation and empowerment, it achieves something fantastically violent and bloody that feels primordial. A visceral and visually confident production, absolutely. A film that furthers the conversation in important and thoughtful ways, not really.

Rape-revenge films have been around for decades and regularly supply pure exploitation. They often involve long and torturous scenes of simulated rape, often with a gang of men and a single woman. After a spell, the woman regains her faculties and resolves to exact bloody retribution. The links between sex and violence in this subgenre often result in protests or critical censures, bringing their intended effect into question. Many filmmakers have argued that their rape-revenge films censure rape and call for the empowerment of women, but the delight with which they shoot violence and female nudity from the perspective of the male gaze suggests otherwise. For instance, in the most infamous of these rape-revenge titles, I Spit on Your Grave (1978), which Roger Ebert called “a vile bag of garbage” and “an expression of the most diseased and perverted darker human nature,” the director Meir Zarchi seems equally interested in turning on viewers with horrid rape scenes as he does with providing catharsis through gory punishment. Of course, not all samples are so thoughtless. Take Ingmar Bergman’s introspective The Virgin Spring (1960), about a Medieval father who avenges his daughter’s rape and murder—which Wes Craven turned into a thoughtless and exploitative remake with 1972’s The Last House on the Left.

From the first moments of Revenge, Fargeat’s camera ogles Jennifer (Matilda Lutz), the young mistress of her married boyfriend Richard (Kevin Janssens). He’s the well-to-do sort who commissions a private helicopter to deliver them to his hunting house—an immaculate home in the middle of a barren wilderness. The frame follows the skimpily dressed Jennifer from behind at a low angle for most of the initial scenes (early on, her buttocks has more screentime than her face), and when she’s not wrapping her lips around a sucker in a sultry way, she’s demonstrating her submissiveness to Richard in bed. Before long, Richard’s hunting pals Stan (Vincent Colombe) and Dimitri (Guillaume Bouchède) show up unexpectedly. They all drink a little too much, she grinds on them, and the next morning, when Richard is away, Stan rapes her as Dimitri resolves to ignore it. When Richard returns, he does nothing more than scold his friends, and then he tries to pay off Jennifer to keep silent. She refuses—an offense that results in an attempted murder, and Jennifer being left for dead in the desert. 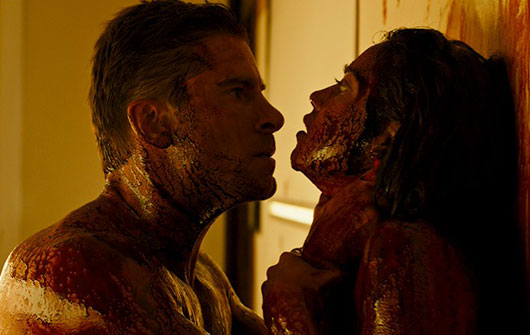 These early scenes intentionally objectify Jennifer, presumably as a contrast to later scenes when, after taking peyote, she morphs into a gun-toting killer of rapists with heightened senses and a seemingly inexhaustible supply of blood. The hunters attempt to track her down in the wilderness, but as the cliché goes, the hunters become the hunted. Even so, Jennifer never becomes a full-fledged character. She’s granted sympathy because, even with a vacuous personality or promiscuity, no one deserves rape. And in the film, there’s never a sense of her personality or identity, beyond that of her three states: Richard’s plaything, a rape victim, and a vengeful killer-heroine. We want her to survive and kill the men, yet that desire doesn’t sustain the nearly two-hour runtime. Worse, Fargeat and cinematographer Robrecht Heyvaert objectify Jennifer in another way after her change. Her outfits shift from bikini bottoms and midriff shirts before the rape to an equally revealing sports bra, short-shorts, and weapon straps afterward. The camera still cuts her body up into segments, framing her as a thing, one used by men for sex, the other pointed against men as a weapon. In both cases, she ceases to be three-dimensional.

Besides the mishandled empowerment of Jennifer, Revenge stylizes the over-the-top survival elements and violence in post-Tarantino ways. Fargeat has said during her press tour that she watched the Kill Bill films a lot before making her film, which explains the theatricality and style-over-substance approach; however, Fargeat’s lean screenplay fails to build characters through, say, engaging dialogue. Her approach relies on copious amounts of blood for a satiating, one-note revenge. During one sequence, the men follow Jennifer’s trail of blood through the desert for a solid minute of screentime in an unbroken shot, but the thick blood trail looks as though she lost about ten gallons of blood. Moreover, Jennifer somehow survives the heat and terrain with no shoes and nothing to drink but a Mexican beer. It’s all very silly and overblown, with the director aiming at something mythic in the realm of Mad Max: Fury Road (2015), but far more simplistic.

Revenge has a single line of dialogue near the climax that could be attributed to its feminist objectives, but the filmmaking hardly amounts to a cogent feminist viewpoint—even with an inspired finale with a blood-soaked Richard running from Jennifer in his birthday suit, replacing the idea of the naked vulnerable female. Nevertheless, it’s ambitions seem to be in creating a female-friendly version of South Korean revenge films like I Saw the Devil (2010), except with none of the scathing character development or sense of tragedy. Thankfully, Fargeat omits the gristly details of the rape, but even so, the film more often occupies a male instead of a female gaze, and its brand of feminism never elevates itself above the lowbrow or base. This is all very unfortunate, as Fargeat has a capable eye and talent for framing, compositions, editing, and color. She juxtaposes scenes of nature with loud electronic music for a playful effect, and she embraces the use of fake blood instead of CGI. Revenge is a promising first film and, with any luck, perhaps Fargeat will approach her next film with more of an eye on instilling some dimensionality into her characters to achieve a stronger sense of catharsis.