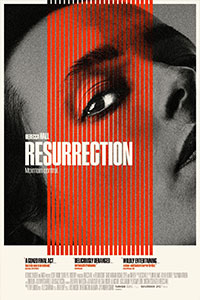 In Resurrection, Rebecca Hall gives the kind of performance that washes away all traces of disbelief. This twisted, Gothic tale sometimes strains credulity, especially after the credits roll and questions arise. But in the throes of its portrait of psychological collapse, Hall renders it sublime. Similar to last year’s The Night House, the actor’s frantic pharmaceutical executive, Margaret, grapples with trauma and loss, making the viewer question what’s real and what’s in her mind. Somewhere along the way, they overlap. But Hall’s performance makes that line indistinguishable, partly because writer-director Andrew Semans has conceived a fractured character. When, mid-film, Hall delivers a speech that illuminates questions about Margaret’s past, we don’t think about the expositional tactic or even how Semans holds the unbroken shot for a whopping seven minutes. Hall submerges the viewer in her character’s subjectivity so that all else fades away. Nothing else exists at that moment, no matter what nitpicks we have later. Although Resurrection isn’t a movie that will click with mainstream audiences, it’s powerful evidence that Hall might be one of the finest actors working today.