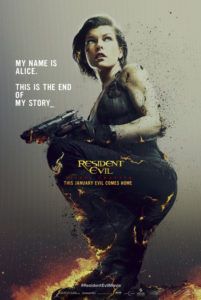 Since 2002’s original Resident Evil, Milla Jovovich’s zombie-killer Alice has suffered amnesia, developed telekinetic abilities, lost those telekinetic abilities, realized she’s just one of the hundreds of Alice clones, regained her telekinetic abilities, learned that she’s the original Alice, lost those psychic powers again, and also discovered that she’s actually a clone, for real this time. Five movies later, writer-director Paul W.S. Anderson brings the hope of an end to the nonsensical back-and-forth in Resident Evil: The Final Chapter, teasing his audience with a possible conclusion to the mind-numbing Screen Gems franchise, which boasts an inexplicably loyal fanbase. But any hope for a real ending seems unlikely as the final scene practically features Alice winking at the audience and saying, “See ya next time, folks!”

If there’s one thing to be thankful for, it’s how each sequel recaps what happened before, as if Anderson knows he caused a certain degree of brain damage and memory loss after beating his audience over the head with his usual barrage of cinematic chaos. The funny thing is, the recaps often manipulate the story continuity and change facts around to service the current movie. Rather than simply pick up where the last sequel left off and remain faithful to the ongoing characters and plot, Anderson seems to make it up as he goes along without any regard for what previously occurred. In The Final Chapter, several twists will not make much sense for longtime viewers—and those unfortunate enough to remember the story minutiae of all five movies—given how they contradict the earlier entries.

The Final Chapter opens in the ruins of Washington D.C., where Retribution (2012) suggested the war against the evil Umbrella Corporation would culminate. (For those unfamiliar, Umbrella released a deadly T-Virus unto the world and set free a plague of zombies and mutant monsters, leaving all but a few thousand humans left alive.) Alice lifts herself out of the ashes only to be greeted by the Red Queen (Ever Anderson), Umbrella’s maniacal holographic computer program that, despite looking like a young British girl, doomed the human race back in 2002. She tells Alice that she’s suddenly changed her mind and wants to help stop the T-Virus. Conveniently, a cure-all anti-virus exists in the Hive, the Umbrella headquarters located beneath the ruins of the decimated Raccoon City. Apparently, Alice has a 48-hour window in which to find and distribute the anti-virus. Otherwise, the last few human settlements around the world will be overrun. How exactly does the Red Queen know that the human settlements only have two days? What precisely will happen when the red-digital-timer countdown reaches zero? Such details open gaping plot holes, though the movie uses the inexplicable countdown throughout.

At any rate, Alice heads to Raccoon City and runs into the evil Umbrella overseer, Dr. Isaacs (Iain Glen), who, for the first time in the series, announces his religious zealotry and proclaims he unleashed the T-Virus to cleanse the Earth, leaving Umbrella executives alive like the animals on Noah’s Ark. Unimpressed, Alice teams with a few scraggly survivors to take Umbrella down once and for all (until next time). None of her new friends creates an impression or lasts very long, though Anderson strives misguidedly for emotional death scenes. Such moments prove unintentionally laughable in this B-movie setting, like when Alice tears up after one survivor is sucked into a giant fan. Along the way, viewers must endure a procession of annoying reveals, as almost everyone onscreen is a clone. After the third or fourth time someone is shockingly revealed to be a clone, it’s no longer shocking. Instead, we become numb to the twists and feel disappointed when someone isn’t revealed to be a clone.

Moreover, everything above proves unwatchably shot. The unintelligibility of it all cannot be overstated. Cinematographer Glen MacPherson seems unable to hold the camera still, and editor Doobie White applies his typical blender treatment. Every scene, even the less actiony moments, have been chopped into millisecond pieces and spliced together in an erratic assemblage. The result contains no shot-for-shot logic and presents a genuine challenge to follow. The viewer watches in a constant state of flux, trying to determine what just happened and what’s going on now. Anderson’s absurd scripting is illogical enough without the formal approach having an incomprehensible, seizure-inducing pace. Apologist fans will undoubtedly call the style “badass,” but the level of pure incoherence onscreen leaves the rest of us desperate for some peace and quiet.

The movie’s release coincides with the latest entry in the video game series, called Resident Evil: Biohazard, a back-to-basics survival horror game that sets aside the more actionized approach of the franchise’s recent games, which were taking a cue from the movies. If indeed this is the last sequel in the Anderson-Jovovich run, let’s hope for a reboot that also adopts a scarier, more cohesive survival-horror edge. Until then, The Final Chapter marks a low point in the based-on-a-video-game series. For the last fifteen years, audiences have suffered a group of movies that are just fine being wildly inconsistent, and so the end of the series remains a hopeful prospect. Nevertheless, we’ll undoubtedly see something like “Resident Evil: Resurrection” hit theaters in a few years.