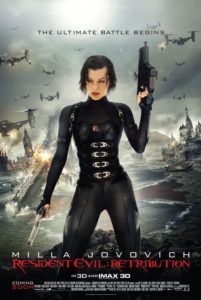 Paul W.S. Anderson’s fifth entry in his based-on-a-video-game series, Resident Evil: Retribution, finds new ways to convince this critic of the writer-director’s sheer ineptitude as a filmmaker. The helmer of The Three Musketeers and Death Race, his signature is less a style than a way of stitching together almost random images of mayhem, gore, and attractive people battling one another. His storytelling makes nonsensical leaps and seems to invent the rules as it goes along. His action consists of choppily assembled slow-mo combat and sour-faced badasses shooting high-tech weaponry at one another. His characters are one-note constructions without purpose except to survive and allow the franchise to continue making ridiculously large sums of money at the box-office. Through it all, Anderson steals liberally from better filmmakers like Carpenter, Romero, and the Wachowskis. It’s insulting, just as a Big Mac would be to Masaharu Morimoto.

For those familiar, Retribution picks up where Afterlife left off, with franchise hero Alice (Milla Jovovich) aboard an Umbrella Corporation tanker and facing an onslaught of Umbrella baddies. After a brief fight, and a much-needed recap of the events in parts 1-4, the action shifts suddenly to a suburban neighborhood. Here, Alice is a housewife with a husband (Oded Fehr) and a young hearing-impaired daughter named Becky (Aryana Engineer). All at once, zombies burst through the doors, and we’ve been transported to Zack Snyder’s remake of Dawn of the Dead. But this is all a dream. (Or is it?) The action shifts again somewhere under the ice in Russia to an Umbrella facility, where Alice is once again insufficiently clad in skimpy examining table sheets. She’s assisted in her escape by Ada Wong (Li Bingbing) and Albert Wesker (Shawn Roberts), the latter being the villain who died at the end of Afterlife. The question of how he appears here, and why he’s a good guy now, remains unanswered.

Anyway, Alice quickly finds a tight black getup and some heavy weaponry. Along with Ada, she must maneuver through this underwater complex, which boasts massive arenas designed to simulate viral outbreaks in various cities (New York, Moscow, Tokyo, and Raccoon City’s suburbia) and uses cloned victims as collateral. Appropriately enough, the characters move from one simulated city to the next like levels in a video game. Meanwhile, the maniacal digitized program the Red Queen pops up occasionally to ensure that Alice and Ada’s trip is littered with zombies, big CGI beasts, and gigantic axe-carrying goons. At least the scenery changes, even if the super-slow-motion action does not. Also, several actors from throughout the franchise thus far return: Michelle Rodriguez is Rain Ocampo, Sienna Guillory is Jill Valentine, and Boris Kodjoe is Luther West. Other actors play memorable characters from the video games: Kevin Durand is Barry Burton, Johann Urb is Leon Kennedy, and so on. Will any of these names matter to anyone other than die-hard gamers? Probably not.

In the suburban stage, Alice comes across the Becky mentioned above, who serves as this movie’s Newt from Aliens. She creates a faux parent-child bond with Alice, and she always needs rescuing. There’s even an identical sequence from James Cameron’s sequel where Alice must save Becky from being cocooned by monsters. In usual Anderson fashion, the movie’s thieveries are abundant and obvious, from bullet-time slow-mo straight out of The Matrix, to Inception’s booming horns in the otherwise techno-laden score by electronic music company Tomandandy. Of course, Anderson’s own mark appears as well: He transitions between action scenes with flashing X-ray views of breaking bones and digital infrastructure diagrams. This, along with intermittent shots of the Red Queen to proclaim “initiate termination protocol,” make us feel as though we’re watching from the perspective of a computer.

Retribution went unscreened for critics, no doubt because Anderson and Sony are well aware of how this franchise’s curiously loyal fanbase keeps coming back regardless of how bad each sequel proves to be. And based on the remarks in the finale where one character moodily suggests “this is the beginning of the end”—not to mention the movie’s $20 million-plus opening weekend—there’s at least one more yawn-inducing sequel planned. Fortunately, the degree to which this fast-food movie and its predecessors are completely forgettable is counteracted by Anderson’s usual clip-show recaps at the beginning of each new sequel. In every respect, the series is engineered exclusively for mind-numbed audiences who soon forget everything they’ve just seen because there’s no need to remember. But I should be clear: there’s nothing worth remembering here.