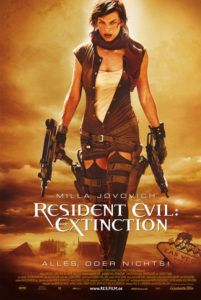 Resident Evil: Extinction begins just as Resident Evil: Apocalypse did, rehashing material from the original film, which was based on the popular video game. The first five minutes show us Alice (Milla Jovovich) awakening, using the same cuts (if not footage) from the first movie, only not in a clip-show format like its most recent predecessor. We soon realize that this third and hopefully last sequel has decided to grave rob from dozens of big franchises, including its own. And while I understand this kind of movie by nature is derivative and relies on recycling ideas, the borrowing that occurs here is unconscionable.

Just to bring you up to speed: the mega-corporation Umbrella has engineered a “T-virus” for some mysterious reason. When exposed to living tissue, the virus reacts by killing, mutating, and then reanimating the flesh, turning its victims into George A. Romero-esque zombies, while some exposed victims grow into baddie CGI monsters with tentacles and big teeth. Also engineered by Umbrella: Alice, who’s not only an adept fighter but, at the end of Apocalypse, she has telekinetic powers. The virus escaped the underground facility known as The Hive in the first film, wiped out Umbrella’s own Raccoon City in the second, and when the third begins, it has killed off most of the Earth’s population.

Our first taste of action is straight out of The Hills Have Eyes. A southern-fried hick family made up of inbred sons and their chubby momma catch the franchise’s hero Alice by posing as distressed survivors of the zombie apocalypse. One of the sons even motions to his belt, as though he’s going to rape Alice in front of his mom. (Oh, those post-apocalyptic hicks! Such charmers.) But as movie aliens, vampires, and zombies all over the universe have learned: don’t mess with Milla Jovovich. Alice responds by kicking the would-be rapist in the face, killing him. She then has to deal with virus-infected dogs (again).

Survivors of the plague live on the road, according to Alice’s opening narration, just like in The Road Warrior, except without all that coolness baggage. Alice survives on her own, keeping off Umbrella’s satellite tracking grid. She has abandoned the other survivors from Apocalypse: the comic relief L.J. (Mike Epps) and the militarily-inclined Carlos (Oded Fehr), who have since formed a convoy. They drive through the desert wasteland that is Earth, avoiding major cities, surviving on whatever’s left. Unfortunately, there’re no Mohawk-laden bad guys to fight with over gas, just zombies.

Umbrella survives in underground bases all over the world, the North American division of which reminds us of Romero’s Day of the Dead—an underground facility run by a mad doctor bent on domesticating zombies. Horror movie buffs will either enjoy this blatant reference or despise its unoriginality (I’m in the latter camp). Dr. Isaacs (Iain Glen) attempts to clone Alice, which, if successful, could take away the undead’s inherent desire to eat flesh. One scene reminds us of Day of the Dead’s Bub, where Dr. Isaacs tests the potentially tame zombie’s recognition and reasoning skills. The zombie is given a cell phone, and he puts it to his ear; he’s given a digital camera, and he takes a photo; he’s given a child’s puzzle box, and he freaks, smashing the puzzle and attacking the doctors. Perhaps the zombie wanted an XBOX 360.

I mentioned before that the Resident Evil zombies were akin to Romero’s zombie archetype; that’s true in the previous films, but now Dr. Isaacs has changed a small zombie group so they can run and reason. Running zombies came about in Danny Boyle’s 28 Days Later and Zack Snyder’s 2004 remake of Dawn of the Dead, and Romero breached undead reasoning skills in his underappreciated Land of the Dead. I suppose I’m attempting to point out that Resident Evil: Extinction has nothing zombie fans haven’t yet seen in better movies. It’s no surprise that this movie makes silly, plagiaristic plot choices—it was written by Paul W.S. Anderson, writer-director of the first Resident Evil and just writer of the second.

Alice re-teams with her buddies Carlos and L.J. and their convoy, protecting them from evil zombie crows, like something out of a twisted version of Hitchcock’s The Birds. Even though she’s endowed with psychic powers, Alice chooses to wipe out human zombies with two knives, meaning we hear a lot of fwoosh sounds and see a lot of slit throats and chopped-off heads. Throughout action scenes, Jovovich’s L’Oréal-rendered complexion remains intact; her skin glimmers from what must be CGI cleanings. I understand why the filmmakers wanted a former model to head their franchise, but when you’re making a movie where the world has become a desert apocalypse, couldn’t they rely on her natural beauty?

Speaking of apocalypses, do you think if Alice had known that her actions from the first film would eventually cause a worldwide zombie apocalypse, that perhaps she wouldn’t have been so selfish, but rather self-sacrificial? If you recall, the virus was originally exposed only in The Hive, whose computer program called the Red Queen suggested that everyone down there should be terminated to protect the topside. Alice and her crew fought back, thinking the Red Queen was nuts. But only Alice survived to see the results of their selfishness: the virus eventually spread and exposed the entire world to zombification. I ask you, is Jovovich’s twitchy, always half-naked-with-tubes-coming-out-of-her-in-a-bubble-of-water performance worth the end of the world? The answer is no.