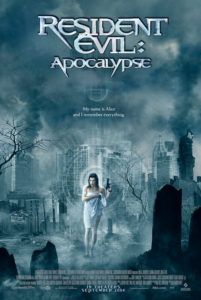 In terms of D-grade based-on-a-video-game movies, Resident Evil: Apocalypse is so bad that even writer-director Paul W. S. Anderson wouldn’t helm the thing. It’s a sad, sad day for any movie studio when he turns down your movie. Don’t worry, though, Anderson wrote it. So the story doesn’t make any sense like one of his movies, except a different director, named Alexander Witt, calls the shots.

If you recall, the first Resident Evil ended when Milla Jovovich’s character Alice wakes up in a lab, having been examined by the Umbrella Corporation’s goons. She finds that the undead have overrun Umbrella’s Racoon City, and the company’s “T-virus” had escaped the underground facility known as The Hive, causing thousands to be exposed and turn into zombies. A conspicuous newspaper headline reads “THE DEAD WALK!”—a reference to George A. Romero’s own series of zombie movies. Alice finds a shotgun and cocks it; she’s ready to kill zombies.

Even if you didn’t remember those last scenes, Resident Evil: Apocalypse shows them to yo. In fact, it recaps everything from Resident Evil like a clip-show, just in case we somehow forgot the impossibly convoluted plot of the first one. It also fills in what happened between her capture and the viral breakout in Raccoon City. Umbrella sends another team to investigate what happened in The Hive, only they’re met at the entrance and immediately overrun by hundreds of undead. Run by Major Cain (Thomas Kretschmann), Umbrella sends black SUV’s throughout Raccoon City to gather up top employees, namely Dr. Ashford (Jared Harris), whose daughter Angie (Sophie Vavasseur) supplied the physical prototype for the pre-teen girl version of HAL-9000, dubbed the Red Queen. Angie’s SUV crashes, leaving Dr. Ashford too preoccupied with his daughter to worry about Umbrella’s contamination quarantine procedures. Meanwhile, the zombie plague spreads throughout the streets.

The movie introduces us to a number of new badasses, including one scantily clad cop named Jill Valentine (Sienna Guillory), an unfunny “comic relief” guy named L.J. (Mike Epps), and special ops hero Carlos Olivera (Oded Fehr). We follow these three as they fight their way through hordes of zombies and panicky Raccoon citizens toward the only escape: the bridge where Major Cain tells citizens they cannot leave the city. If they try, soldiers will be ordered to execute them—they risk contaminating the outside. Our three new heroes retreat to a church, where they find themselves out of bullets and faced with a few “Licker” mutants. Suddenly, a motorcycle breaks through the church’s stained-glass window and lands in the middle aisle—it’s Alice, ready to save the day with unfeasible acrobatics and super-slow bullet-time killings! Never mind how she knew other badasses were in distress inside the church. I suppose it’s just something badasses are born with: a sixth sense that tells you when your own kind are in trouble.

Milla Jovovich has played the same role in about four or five movies now: the martial arts-efficient supersoldier hottie engineered by whomever. Not only in the Resident Evil movies, but in The Fifth Element, and the dreadful Ultraviolet too. Such roles usually require her to lie naked on an examining table at some point, with tubes and wires clipped onto her, only so she can wake up in a twitchy fit to remove them and escape. Maybe this happened to Jovovich in real life, or perhaps while working as L’Oreal’s spokesmodel. Why else would she choose the same role over and over again?

It turns out Umbrella has genetically engineered Alice to kick butt. And if you remember Matt from the first movie (the only other survivor at the end), he’s back too, except Umbrella has mutated him into a 300-pound mini-gun-carrying zombie soldier called Nemesis. He looks like a foam Halloween costume with a creepy, lipless smile. Alice seems pretty broken up about what’s happened to Matt, though I don’t remember the two having any deep relationship in the first movie.

Much of the action is laughably bad, especially when Jovovich is running down the side of a building with a bungee tied to her. Mike Epps’ comic relief is never funny. The whole I-have-to-save-my-daughter subplot doesn’t work since we’re never sufficiently introduced to the characters. And Witt composes the action scenes without a hint of inventiveness, just chaotic editing. The zombies, usually portrayed in a blurry haze, appear when the movie calls for them. But when Alice and Nemesis have their martial arts showdown in a city street, zombies are inexplicably absent. Who knows what plans Umbrella has in store for Alice and Nemesis—we’re never told. I remember from the first movie someone saying Umbrella products have reached 90% of American homes. If that’s true, why the hell are they researching viruses and mutants? How will this help society? Do they expect people want zombies in their homes? I can tell you I certainly don’t, no matter how fun Edgar Wright’s Shaun of the Dead makes them look.