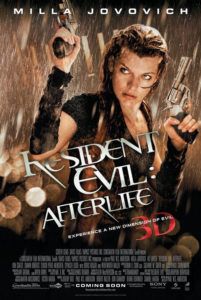 Paul W.S. Anderson’s Resident Evil: Afterlife marks the fourth entry in the franchise that began in 2002. Anderson, hack director of Alien vs. Predator and Event Horizon, helmed the first Resident Evil feature, skipped the second and third, and now returns for a large-scale fourth venture, released in real 3D no less. His wife Milla Jovovich returns as the heroine, as does the usual lot of flesh-eating zombies and mutants rendered through inferior CGI. The plot hardly develops newly introduced characters (because they quickly become lunch), but you’re not watching a Resident Evil movie for characters—you’re watching for blood and gore and action. And Anderson delivers, in the low-grade, based-on-a-video-game stylings his fans expect.

If you can’t remember the ending of the last entry, Resident Evil: Extinction, don’t worry; it was forgettable. All you need to know is that our genetically engineered hero Alice (Jovovich) discovered that Umbrella, the evil pharmaceuticals company that caused the zombie apocalypse, made umpteen clones of her. The new movie opens with these dozens of Milla Jovoviches raiding Umbrella’s super-secret underground lair, run by Albert Wesker (Shawn Roberts), a reoccurring villain from the Capcom video games. This reject from The Matrix combines the traits of Neo and Agent Smith to produce a devilishly-voiced baddie that dodges bullets and never removes his shades (unless it’s to reveal his orange-shining demon eyes). Wesker injects the real Alice with a serum that removes her heightened strength, superhuman agility, and random telekinetic powers. But the movie forgets about this later on when she’s leaping about the screen to defeat the attacking zombie horde. In a missed opportunity, the movie never bothers to suggest that being “human” again is a weakness that Alice must overcome.

Anyway, Alice hopes to find the other survivors from Extinction, who fled to Alaska seeking refuge at Arcadia, a radio beacon of unknown origin that claimed to have infection-free shelter, food, and ultimately civilization. Zombie movie rule: safe havens do not exist. Alice quickly learns this when she arrives to find Arcadia isn’t where it’s supposed to be, though she does come across an amnesia-ridden Claire Redfield (Ali Larter). Together they fly to Hollywood, where they land at Citadel Penitentiary, another safe haven, this one occupied by a group of assorted survivors who aren’t worth mentioning. The exception is an inmate locked deep in the prison’s bowels, boxed inside a Hannibal Lector-style maniac cell. He later becomes the movie’s local anti-hero, played by Prison Break’s Wentworth Miller, doing his best Napoleon Wilson impression.

The movie has been all set up to this point, so the plot can dive into a situation reminiscent of Zack Snyder’s Dawn of the Dead remake, where survivors plan to escape a fortified building in a souped-up automobile by plowing through crowds of undead toward a safe haven on a boat. Of course, it doesn’t quite work out that way. What’s more, there’s still that pesky Wesker fella to deal with. The scenes in the prison facility prove interesting, as they relate back to the original Resident Evil movie, which remains the best in the series for its intense claustrophobia. Certainly, the movie as a whole follows a more cohesive plot than Apocalypse or Extinction. And even if it’s the best entry since the original, that isn’t saying much for a subpar franchise that has never lived up to its potential.

Admittedly, Anderson employs some effective 3D tricks when he displays an obvious awareness of shot composition and depth of field. He’s conscious that with 3D there must be a clearly defined fore, middle, and background for the gimmick to take hold. He utilizes this in carefully blocked shots that showcase the possibility of the device, yet he does the usual nonsense with it, such as splattering brains and sending throwing stars at the audience for silly Whoa! moments. Despite the popularity of this fad, Resident Evil: Afterlife represents the first real 3D movie since James Cameron’s Avatar, whereas other titles released this year (Clash of the Titans, Piranha 3D) were converted after being shot in 2D. And yet, using real 3D leaves a strange visual consequence, in that the characters onscreen never feel truly there. Whether Anderson augmented some scenes with CGI-rendered backgrounds or if this is just an unfortunate result of the 3D, one cannot be sure.

Genre fans will recognize Anderson’s influences, which aren’t so much hints as blatant rip-offs. He nods to John Carpenter’s Assault on Precinct 13, as well as The Thing with those face-splitting dogs. Mainly, Anderson wants to make The Matrix, and not just because Wesker recalls The One. Yes, Wesker moves like a phantom to avoid all manner of weapons projected at him, smiling as they flutter by his head. But bullet-time fight scenes shot in too-slow-motion remind us why Hollywood should’ve stopped using the effect years ago. Anderson doesn’t try to disguise his influences, and that has always been one of his significant downfalls. He’s a fan making fan fiction, yet his movies make money. But they offer no personal signature (unless you count techno beats set to mindless action).

Supposedly this is the last Resident Evil movie in Anderson’s continuation, which will be followed by a reboot of the entire franchise. That’s the rumor, anyway. But when the cliffhanger ending suggests otherwise, it’s hard to believe such industry reports. Doubtless, we’ll see Jovovich battling zombies and mutated monster spawn for entries to come. In the meantime, Resident Evil: Afterlife is a moderately watchable sequel, exactly what you expect from a “part four” movie (if not better, given what came before it). And as much as it pains this devout anti-3D critic to admit, for action-horror fans or followers of the 3D trend, the movie might be worth seeing for Anderson’s skilled use of the “third dimension,” if that’s your thing.