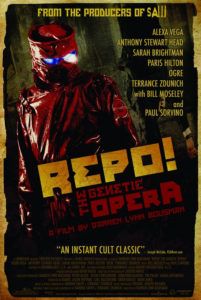 Repo! The Genetic Opera might be labeled as trash by some, a desperate and artificial attempt at fabricating cult classicism by others. But these descriptions are too generous. This film is just plain terrible. Attempting to reinvigorate the rock opera with a blood-drenched dystopian setting, director Darren Lynn Bousman (Saw II, III, and IV) pads this dreadful product with teen angst, pathetically clichéd lyrics, and pointless carnage, all arranged to sloppy Industrial and Acid Rock music, frantically trying to find his niche among those hungry for cultish material.

In the all-too-frequent not-too-distant future, everyone has reverted to 1990s Goth trends. Women costume themselves like Elvira. Men look like The Crow wannabes. Pale skin and black eyeliner are minimum standards for fashion. Disease leads to a plague of organ failures, which spawns GeneCo, an overruling conglomerate that emerges to supply organ transplants for the needy. Given the availability of affordable surgical manipulation, citizens become addicted to unnecessary operations. But don’t fall behind on your payments, otherwise the Repo Man will come to collect your heart, liver, spinal column, or whatever, chopping it out of you with all the bedside manner of a mass murderer.

From that concept, minus the outdated choice of costume design, I’m intrigued. The idea of a corporation financing organs and then heartlessly (pun intended) reclaiming them should the consumer miss a payment is wonderfully macabre, reflecting not only the callous nature of America’s medical industry, but pop-culture’s fascination with nip/tucking. Unfortunately, the interesting aspects of the plot exist solely in theory; the realization bears none of its possibility. And that roundabout compliment, dear reader, will be the only word of praise I give this film.

A graverobbing narrator (Terrance Zdunich) sings the story of 17-year-old Shilo (Alexa Vega), whose overprotective father sparks more than one song about teen rebellion on her part. Daddy, played by Anthony Head, also happens to secretly be GeneCo’s sole Repo Man. But before you can ask how only one Repo Man covers the film’s entire megalopolis, let’s introduce Rotti Largo (Paul Sorvino, the film’s resident Pavarotti), GeneCo’s founder, pressured by his encroaching death to name the heir to his company’s throne. His three children are certainly not options: son Luigi (Bill Moseley) is a murderous psychopath; son Pavi (Nivek Ogre) is obsessed with repeated facial surgeries; and daughter Amber Sweet (Paris Hilton) is a drug addicted whore. For reasons involving long-forgotten murders and unreturned love, Rotti picks Shilo as his heir.

Not one song flows. You couldn’t sing along if you tried. A demented and poorly-written mixture of Andrew Lloyd Weber and Rob Zombie plays like musical torture porn. The compositions cry with emo sentiments, and superfluous singing about blood, drugs, surgery, sex, and whatever else the writers could think of to gather attention from cult fanatics. And while bellowing their second-rate lyrics, the actors rarely sing on key, albeit purposely. The film tries much too hard, straining itself in a hopeless attempt to appeal to The Rocky Horror Picture Show crowd, and achieve an instant cult hit teens will love years from now. Lest they forget how that requires a superior film worth remembering.

Intentionally setting out to achieve amateur cultishness, Repo! The Genetic Opera offers a transparently “alternative” experience. True cult should be unintentional and occur when viewers can actually mock the outcome on some level. And so, watching the film, realizing the bombastic filmmakers chose a performer like Paris Hilton for the cast specifically because she’s a poor excuse for talent, because she’ll send a kind of Freakshow Alert to the right audiences, we can’t enjoy the film even on the so-bad-it’s-good level. (Note: On the plus side, one scene features Hilton’s face falling off; but wouldn’t you know it, she’s just as inexpressive underneath, proving shallowness is not just skin deep.)

Shot in saturated metallic black reminiscent of Marilyn Manson music videos, Bousman’s direction looks no different than one of his Saw movies. The image is perpetually filtered with a scratchy light, a trait that might make Trent Reznor, or those like him, appear totally cool and wraithlike in a five-minute video, but here serves as a signifier of the aberrantly self-conscious production. Despite Bousman’s evident labor over constructing this dark little debacle, the film still feels thrown together like a head-on collision. We watch as if driving by, looking at the disaster strewn out over the highway, wondering what the hell happened here. Of course, then we forget about it and go about our merry way.