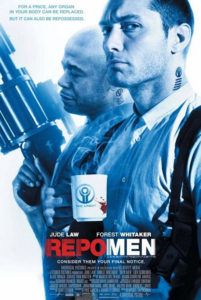 The unfortunate thing about Repo Men is that it contains so much possibility. But then it takes that possibility and flushes it down the toilet through corny dialogue, poor character development, and almost no plot beyond what’s shown in the trailer. In this bizarre mix of action, sci-fi, horror, and comedy, first-time director Miguel Sapochnik concocts a promising setup but fails to deliver. The result is frustratingly disappointing because all the right elements seem to be in place. The actors are strong. The story is interesting. The action scenes are well directed. But the structure is just so jumbled that there’s no apologizing for it to enjoy the rest.

The concept of repossessing the organs of debtors has been fascinating since Repo: The Genetic Opera, a horrible failure of a cult movie that nonetheless contained an intriguing premise. Like that film, this one is set in a dystopian future. The economy has plummeted and one of its saving graces is a medical advancement that allows a whole slew of artificial organs (called artiforg) to function within the human body. If you require a heart, lung, knee joint, or whatever, you no longer need to wait for a compatible donor. Part hospital, part bank, The Union has made their artificial organ racket into big business. Of course, these organs aren’t cheap, and after three months of delinquency the repo men come to recover the bank’s property. The repo men will simply zap you with a taser and expertly remove the artiforg from your body, leaving you to die afterward.

Jude Law plays Remy, who, along with his chummy longtime friend and partner Jake, played by Forest Whitaker, represent the best repo men in the business. But then, because the story demands it, Remy has a string of bad luck. He announces an impending switch to a sales position to calm his worried wife (Black Book’s Carice van Houten) and child, but when he’s asked to do one last farewell mission Remy is shocked by a faulty defibrillator. When he comes to, he’s been strapped with an artiforg heart, his wife has left him, and suddenly he’s lost his knack for repossessing organs. Because he can’t work, he falls behind on payments, and when he does, The Union predictably sends his best friend, Jake, to recover the overdue organ. As expected, Remy fights back and things get bloody.

Much of the movie’s humor, if you can call it that, revolves around the varying attitudes toward violence. The script makes note that Remy and Jake are “dead inside” because they can laugh and share war stories about catching and slicing open artiforg debtors. At times, blood is just a sight gag for congenial moments between friends—it’s here where the charisma of Law and Whitaker really prevent the movie from becoming worse than it could’ve been and make it better than it should be. At other times, the gore has gross-out value, or merely appears as the result of a nasty action scene. Whatever its use, Sapochnik seems to enjoy spraying the red stuff about, and he does so with surprising clarity of tone from scene to scene.

There’s probably a metaphor in the movie somewhere that suggests the artiforgs are much like credit cards and The Union is representative of all credit card companies. After all, in the eyes of the company, a good credit card customer is not one who pays their balance every month; a good customer is one who falls behind and allows the company to accrue interest and make money. There’s a scene where The Union’s crooked branch manager Frank (Liev Schreiber) gripes to Remy that too many customers are paying their bills and how that’s bad for business. The satire exists in Repo Men, but it’s deeply buried under action movie clichés, enough so that it’s impossible to believe the filmmakers had any real intentions of having any kind of message.

Instead, Sapochnik’s sole intention appears to be to borrow from every cult movie in the book. And what’s worse, he does it very obviously, as if stitching together his homages with black yarn. Nearly every major plot point seems to take from another, better film and tries to enhance them through excess blood and over-the-top tonality. The script hops between these moments like they’re all the movie has to offer: There’s a bloody fight in a hallway complete with hammer that recalls a similar fight in Oldboy, but this one has a hacksaw too. There’s a neverending white room filled with a repetitious image extending into the distance straight out of The Matrix, but this one has a gunfight in it. Or from Fight Club, there’s the idea of wiping “the system” clean so everyone starts at $0 again. And though the twist ending won’t be divulged here, suffice it to say that it’s reminiscent of Terry Gilliam’s Brazil, except ludicrous.

Sapochnik has obvious directing talents that would be better served by a story that knew what it wanted to say. Through the shoddy narration, which is abandoned in the third act, to the downright ridiculous conclusion, the story as it’s told squanders the admirable setup of the movie. The central problem relies too much on other sources and doesn’t have enough confidence in its own ingenuity, of which there is much. You could sit down for the full runtime, watch scene for scene, and discuss which movies Repo Men is ripping off despite its innovative scenario. Should you see it, for most of the movie you’ll be thinking about its influences more than the movie itself. And when it’s all over, it feels like nearly two hours of missed opportunities.