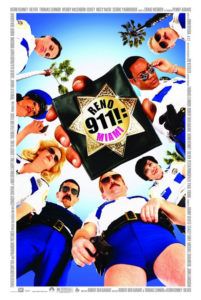 The popular Comedy Central show Reno 911! makes its big-screen debut in Reno 911!: Miami (a title with too much punctuation). If you’ve never seen the show, it’s a mockup of COPS except a little funnier and set in Reno, NV. Filled with star-studded cameos, lots of swearing, and boobs galore, the film’s cast sheds all of their TV hindrances for their transition to motion pictures. But ultimately the movie is nothing the show wasn’t capable of, minus a few F-words and topless women. Television on the big screen just isn’t impressive. Throughout the movie,  I felt as though I should be at home in my pajamas, only half-watching this movie just for noise in the background, while I busy myself with something that deserves my attention.

The story involves the officers of Reno 911! accepting an invitation to a law enforcement conference in Miami. Excited as children at the gates of Disneyland, upon arriving the group is crushed when told their names aren’t on the list. Refused admittance into the conference, the officers decide to make the best of a bad situation: they check into a dank motel and enjoy the spoils of Miami. Later, they discover the conference was contaminated with a poison and all officers in the area, save themselves, were quarantined inside. Reluctantly, the city of Miami puts the cops of Reno, NV in charge of the city’s safety. Antics ensue.

A college professor of mine asserted that TV imitates film, but film never imitates TV. As motion pictures came first and are generally regarded as art, TV remains jealous, always attempting to become film, thought never quite reaching the prestige of cinema. In terms of form, TV is low art and film is high art. Cinema only works at making fun of TV; whereas TV attempts to emulate film and can never make fun of it. Given the history of TV-based movies wherein the film out-does the show on which it’s based (see Mission: Impossible, The Fugitive, etc.), this opinion is hard to argue against.

Reno 911!: Miami desperately reaches for filmic standards by including a new “exotic” locale and an explosion or two, but accomplishes nothing the TV show was incapable of. The movie feels like the show moved from Comedy Central to HBO, as the TV-esque presentation varies little, save for the aforementioned swearing and nudity. These changes become obvious, if not pointlessly labored over—specifically the nudity, which is literally shoved in the audience’s face as if to say, “We’re not on TV anymore! Look what we can show you now: Boobs!!!” The movie features cameos from Danny DeVito, The Rock, Paul Rudd, and regulars from the short-lived MTV sketch comedy show The State, of which several members of the Reno 911! cast are alums. These guest appearances were chuckle-worthy at best. Their inclusion desperately attempted to elevate the film, but instead reminded the audience that Reno 911!: Miami didn’t have any real stars of its own.

I wasn’t expecting cleverness from Reno 911!: Miami (and I didn’t get any cleverness, either); instead, I hoped for something worthy of the theater. I laughed plenty, but the laughs were the type of gross-out and shock-humor devices that don’t last; repeated viewing won’t be as fruitful as the first. I kept wondering why this film was made. Is the show that successful? Unless you’re a die-hard fan of the characters, there’s no reason to see this picture. Audiences looking for something other than TV on the big-screen will be disappointed—it’s a meagerly glorified four-part episode.