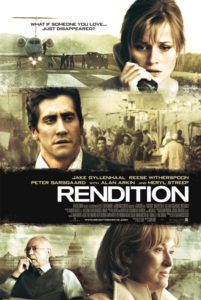 Extraordinary rendition is the Clinton Administration’s invention, and the counterargument to claims that Americans are above torture. In our post-9/11 world, it’s become near-standard practice for our government to take suspected terrorists or terrorist accomplices out of the country where they are tortured until the U.S. has what information it requires. Ripped from recent headlines exposing this process, Rendition is unapologetically manipulative and overly dramatized, despite being relevant and well-directed by Gavin Hood (Tsotsi). The film’s goals are honorable enough; it suggests that rendition makes us hypocritical, our political conscience unclean. True, especially when our president damns those countries that employ torturous interrogation techniques. But what if it pays off or save lives? Meryl Streep plays U.S. intelligence honcho Corrine Whitman, who orders that Anwar El-Ibrahimi (Omar Metwally) be taken by the CIA on his flight from South Africa to Washington D.C. He is to be held and interrogated until mysterious telephone calls, that may or may not have been placed to his cell phone from a known terrorist, are explained.

The Egyptian-born Anwar leads an ordinary life in America. He’s lived here since he was fourteen, has a Green Card, passport, and respectable job. College educated, Anwar married his sweetheart Isabella (Reese Witherspoon), has one child and another on the way. When Anwar’s plane doesn’t arrive from South Africa, his wife grows suspicious. Despite being severely pregnant, she makes a jaunt to meet with her old college pal Alan Smith (Peter Sarsgaard), an assistant to a U.S. senator (Alan Arkin). Smith pulls some strings with his boss, getting information on Whitman and her potential involvement with Anwar’s rendition. Of course, this is all very hush-hush and off the record, so Smith can’t exactly point fingers and start accusing. Meanwhile, a bombing occurs overseas in Africa where the CIA takes Anwar. That leaves lackey agent Douglas Freeman (Jake Gyllenhaal) to take over for his dead partner, whom Whitman calls “a jackal”. Freeman, however, is not a jackal. He’s the brooding agent type we see in dozens of war and spy movies. Melancholy seems to guide his every movement and action. He’s resigned to drinking alone in long, pondering shots; this gets worse when Freeman is asked to oversee the torture and interrogation of Anwar.

Abasi Fawal (Yigal Naor) is the interrogator. It’s not so much a search for the truth with Abasi, but more just a search for answers. If Anwar admits he’s received phone calls on his cell phone from a known terrorist they’re investigating, then everyone can go home. Anwar doesn’t give in, and so the audience and Anwar are subjected to grueling torture scenes, which are becoming all-too-common in American cinema as of late. Somehow, Freeman, the torturer, and Anwar are all connected to Abasi’s daughter Fatima (Zineb Oukach), whose love affair with the young Khalid (Mohammed Khouas) is a secret, even though her father is not a secret to Khalid.

While one would expect these characters to interweave in a brilliant play of mosaic structure, they do not. Each has their own, one-note pathway set from the initial scenes. None of them are particularly well described; some of them are even insultingly bland. Take Reese Witherspoon’s wife character. She walks about pregnant, sporting her burgeoning belly, faced with the one goal of finding her husband. And despite being college educated, supported in her home “duties” by Anwar’s mother, and apparently connected with people in Washington D.C., the character never grows in her quest for the truth about her husband’s disappearance. Other characters also remain singularly pitted: Anwar gets tortured; Whitman acts heartless; Smith is a too; Abasi is tough. Only Freeman makes a leap, but his story is only one in about five told.

Screenwriter Kelly Sane poses several humanist questions throughout, primarily through Freeman’s character, but her narrative makes the mistake of revealing only victims. There’s little argument here, as we never suspect Anwar of terrorism or the aid thereof. If Sane posed more of a debate, say where the inhuman practice was questioned when used on an actual terrorist, perhaps we would have been drawn into the discussion. Instead, those who order extraordinary rendition are blatantly bad, while victims to it are wholly good. Rendition doesn’t want its audience to ponder this question for themselves: Would torture be justified if it saved lives? Whitman makes her case that rendition has saved thousands; Freeman suggests only about ten percent of the tortured reveal accurate information. Are the results more favorable than the means? It might have been an intriguing argument; instead, it’s a message movie that has both its answers and its Anwar wrapped up in a pretty bow.