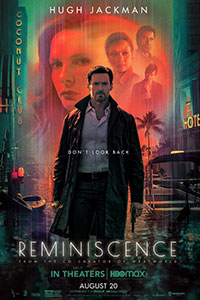 Reminiscence looks great on paper. Director Lisa Joy, co-creator of HBO’s Westworld, makes her feature debut with an original script. She lands an A-list cast, including Hugh Jackman, Rebecca Ferguson, Thandie Newton, and Cliff Curtis. Her Nolan-esque concept involves a machine that accesses the memories of its users, illuminating the mind’s forgotten images, or “reminiscences,” in a vast drapery of fiber-optic tinsels—a decidedly neat idea. Joy sets her story in a futuristic version of Miami half-submerged by rising oceans, leading to stunning imagery and timely ecological commentary. In her textbook use of science-fiction noir, she invents a postwar mood following “Border Wars” that have reshaped and scarred everyone involved, paralleling how World War II affected the film noirs of the 1940s. And the narrative thrust entails a downtrodden investigator searching for his lost love, a duplicitous femme fatale, requiring him to mine his memories for clues.

All of that sounds intriguing, right? However, the reality is that watching Reminiscence is an endurance test. It’s two hours of Jackman’s character, the sour-faced Nick Bannister, scowling through scenes and unloading exposition in his omnipresent voiceover. Nick talks in clichés like he’s been transported to the 1940s: “The past can haunt a man.” His hard-boiled routine feels like a genre exercise, as opposed to self-aware characters inhabiting a believable world. Nick’s past involves a mysterious lounge singer, Mae (Ferguson). Dressed like Jessica Rabbit and only slightly less sultry, Mae visits Nick when she loses her keys. Nick runs a memory shop where, along with his alcoholic, ex-soldier assistant Watts (Newton), he helps people explore their minds for cherished memories. The technology was developed initially for interrogations, we’re told. Of course, Nick falls in love with Mae at first sight. Cut to years later, long after their short-lived romance has ended, and Mae has since disappeared. Her memory haunts Nick on a years-long search to uncover her secrets and find her.

Joy borrows liberally from other works of science fiction, leaving viewers well-versed in the genre to think about all the better movies they’d rather be watching. The most obvious reference point is Ridley Scott’s Blade Runner (1982), the mother of all future-noirs, with which Joy’s film shares a preponderance of neon and waterlogged locations. But Joy’s screenplay takes the noir conceit even further with a dangerous woman, dark secrets from the past, and omnipresent voiceover (a noir trait Scott had the good sense to remove in his Director’s Cut). Nick’s eventual obsession with living in his recorded memories, and using a memory card device to revisit them, brings to mind Kathryn Bigelow’s Strange Days (1995), an urgently relevant film for today. What’s curious is how Reminiscence feels like a throwback to a time before Strange Days, whereas Bigelow’s film feels like a postmodern reconsideration of Joy’s more traditional, regressive narrative motifs. Elsewhere, the random, elaborately staged shootouts and hand-to-hand fights in Joy’s film feel wildly out of place for this film’s tone. 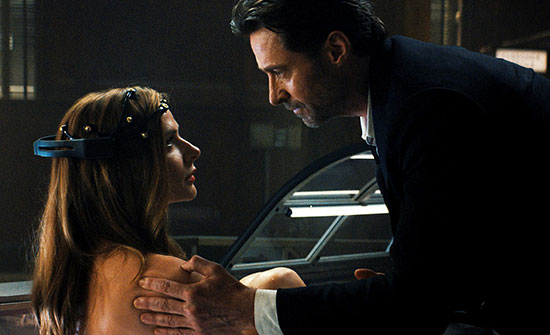 “Who was she? Was she running from the past?” Nick asks in his narration, written in a hard-boiled style that sounds almost parodic. Indeed, the problem with Reminiscence isn’t Joy’s ideas or even the presentation. Cinematographer Paul Cameron captures an appropriately dour cityscape, and images of the flooded “Sunken Coast” make for a distinct environment. Joy seems committed to presenting a believable, Venice-like version of Miami aided by convincing CGI. Unfortunately, the characters speak in an unbelievable noir tongue, making every line sound like a banal lapse to a classical style. Worse, the characters, Nick above all, tend to repeat themselves with aggravating regularity. Every time one of Nick’s clients enters his chamber to access their memories, he guides them through with his special intro: “You’re going on a journey, a journey through memory. The destination: a place and time you’ve been before.” We hear this speech several times, spoken like a mantra, and others remark about how Nick has a special knack for guiding clients through their reminiscences. But it sounds like the routine of a back alley hypnotist.

Nick’s mantra recalls a similar repetitive incantation from Christopher Nolan’s Inception (2009), another film that deals with the future, the unconscious mind, and conceptual puzzles. Marion Cotillard’s Mal repeats a riddle (“You’re waiting for a train…”), though it contains a greater metaphoric and emotional meaning in that film. But there’s nothing so substantive about Reminiscence, despite Joy’s heavy-handed application of the narrative’s themes into the surface text. This is somewhat surprising given her thoughtful, complex work on Westworld alongside her husband, Jonathan Nolan. Similar to Nick’s mantra, a recurring flashback involves Mae asking Nick to tell her a story with a happy ending. Nick says no stories have happy endings, so she asks him to tell a sad story but end in the middle when it’s happy. Nick tells her the Greek myth of Orpheus and Eurydice, ending when the two lovers escape the Underworld. Reminiscence repeats this scene between Nick and Mae, returning to this exchange several times as if preparing audiences for when it concludes on a similar note. But it’s neither a profound idea nor does it resonate with Nick and Mae’s romance, which is never adequately developed.

Beating the point to death, Joy wants to say something weighty and meaningful about the appeal of the past, memories, and nostalgia. But I’m reminded of something Tony Soprano once said: “‘Remember when’ is the lowest form of conversation.” Reminiscence is an entire film about people denying their present and future; they’re living for the past. The concept worked better in Alex Proyas’ Dark City (1998) and Tony Scott’s Déjà Vu (2006), obvious comparison pieces. Here, the only character to escape her past is Watts, who should have been the protagonist, watching as Nick loses himself in his memories. Instead, Joy forces the viewer to spend time with a character hung up on his memories, like a drug addict. It’s not very engaging, and Joy’s solution of ending in the middle feels like a dull attempt at Nolan-brand narrative puzzle work, selective memory at its worst, or self-destructive mental gymnastics. At some point, Nick just needs to face reality and move on with his life—which is exactly what we want to do when Reminiscence’s credits roll.