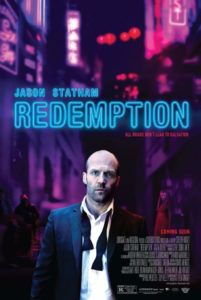 Screenwriter Steven Knight has often explored moral ambiguity in London’s gritty underbelly, and filmmakers like Stephen Frears (with Dirty Pretty Things) and David Cronenberg (with Eastern Promises) have embraced Knight’s grim, yet curiously romantic view. The writer mines similar territory in Redemption, a solemn thriller featuring an uncharacteristically grave performance from action star Jason Statham. Also Knight’s directorial debut, the film presents Statham as an ex-Special Forces soldier hiding on the streets from a court martial after a traumatic incident in Afghanistan has left him scarred. Saddled with heavy doses of remorse and post-traumatic stress disorder, he dotes over a local nun, even while searching for the means to salvation as the muscle for a Chinese ganglord. Likewise, the film itself feels incongruous, blending moral soul-searching with Statham’s usual martial arts-laden action.

Wandering London streets, addicted to alcohol and drugs, trying to forget his past, and searching for deliverance, Statham’s absurdly named Joey Jones hallucinates about being watched by hummingbird drones sent out by the military and authorities to observe him. Knight cuts away to the perspective of London’s extensive CCTV surveillance network, images which may or may not be inside Joey’s head. Consider instead that Joey associates the cameras and hummingbirds with his prevalent Christian guilt. The hummingbirds, then, are God, hence the singular U.K. title of Hummingbird (France’s title is Crazy Joe). One day, Joey stumbles into the posh apartment of a homosexual photographer and finds he has eight months to squat there until the owner returns. Long-haired and rough looking, he uses the place to make himself up to look like The Transporter again. Before long, Joey finds a job punching guys for a Chinese gangster (Benedict Wong), a job for which he earns oodles of cash.

With his newfound income, he’s determined to make things right—not necessarily with God, but with three women in his life. Foremost, he gathers money for his estranged wife and daughter, though he never suggests that he might reenter their lives. Second, he wants to find the killer of Isabel (Victoria Bewick), his onetime fellow vagabond who was murdered after entering a life of prostitution. Lastly, Sister Cristina (Agata Buzek), the timid nun who runs his local homeless shelter, protects Joey but she doesn’t know why—probably because she feels some kind of latent sexual attraction to him, despite her vow of celibacy. After carrying out assignments where he bashes in brains for cash, Joey sends Sister Cristina charity funds for the local vagrants and also tells her to spend money on herself. She’s tempted, of course, and finds herself attracted to the heroic and eventually mythic Joey Jones—whose reputation becomes known throughout the city as an angel to London street urchins.

Statham carries the weight of his conscience on his brow nicely, although Knight’s silly, abrupt flashbacks to Joey’s time in Afghanistan are fuzzy at best. The audience is left with only a vague impression of what set Joey off on his guilt binge and why the fuzz is after him, images delivered in brief jolts that never quite come together. Regardless, Statham lumbers along, effective in his pensive brooding, even if his motivations aren’t precisely understood. The actor relies much on his natural charisma to draw us in, and the film’s two or three intense fight sequences will satisfy his admirers more interested in watching him kick butt. Then again, it’s a pleasure to see Statham trying something more than his customary one-note badass, no matter how overwrought the film’s titular theme may be.

Indeed, Redemption goes too far when, in the final scenes, the romantic interest Sister Cristina holds our hero like some Mother Teresa of the London underworld—this after they go to bed together. Knight’s attempts to imbue his film with dramatic and visual poetry aren’t subtle, but the slow, immersive way in which the more unimaginative themes unfold is rather effective. Nevertheless, the more heavy-handed flourishes are easily forgotten next to the simple joy of watching Statham eventually track down the prostitute-killer and deliver comeuppance. Even more impressive is the cinematography by Chris Menges, who captures a neon-lit view of London rarely seen in cinema. Knight’s representation of London’s rain-drenched city streets in almost perpetual nighttime make the city a central character is this actionized fairy tale, a lukewarm but easy recommendation for Statham fans.