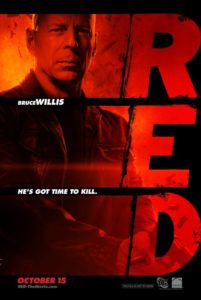 An adaptation of the DC Comics graphic novel by writer Warren Ellis and artist Cully Hamner, Red is all about surfaces. Screenwriters Jon and Erich Hoeber altered the material from a moody, stylized spy yarn into an airy action-comedy for a small collection of gifted actors. Bruce Willis, Morgan Freeman, John Malkovich, Helen Mirren, and Mary-Louise Parker appear in one-note roles that work because the audience has a long shared history with these performers. Their playful presence makes the clichés in the plot seem to disappear. Dig any deeper than the superficial gloss on the exterior, however, and you’ll expose the fragility of it all. But, with so many talented actors populating an entertaining diversion, surface values are more than enough to satisfy.

Exactly what The Expendables was going for but failed to achieve, the movie assembles a massive ensemble for a fluffy piece of disposable fun. Unlike Sylvester Stallone’s film, though, it doesn’t take itself too seriously, and it knows exactly how to use its cast to ironic effect. Here, Willis plays Frank Moses, an ex-CIA operative deemed “Red” (Retired and Extremely Dangerous) and who is targeted by a government-sanctioned hit squad. Willis has the most predictable role as the unstoppable hero. Where the movie plays with our expectations is the supporting cast. For example, the normally dramatic actor Malkovich has the comic relief role, playing a paranoid former agent who’s a little off after years of exposure to brainwashing experiments. Or there’s Mirren, who plays a hitwoman with a penchant for taking lives. Freeman plays their former cohort, and he shows up to read his lines like only Freeman can.

The story begins with the bored life of retiree Moses, who spends his days flirting with pension office representative Sarah (Parker) on the phone. They plan to meet, but sooner than she expects when he appears in her apartment one night. Having just survived an attempt on his life, Moses must protect Sarah from those who would harm her to get at him. After some investigation, Moses learns the members of his now aged team are being assassinated one-by-one. So he rounds up the old gang (Freeman, Malkovich, Mirren, and Brian Cox too) to prove that senior citizens can still kick ass. Meanwhile, ambitious young CIA gun Cooper (Karl Urban) attempts to carry out his orders from his boss (Rebecca Pigeon) to kill Moses, but finds that Moses and Co. are tougher than their age implies.

Dreadful transition animations with a sort of postcard, corny book cover premise attempt to establish an escapist theme that relates to Sarah, who dreamed of travel and adventure before Moses came into her life. But the movie isn’t from Sarah’s perspective, making these transitions ineffective. This is a minor quibble, as the actors instantly draw our attentions. Flightplan and The Time Traveler’s Wife director Robert Schwentke knows the lighter story wouldn’t work without this cast, and so he allows the actors to make the most of their one-note roles. Despite the all-too-common trend of A-list Hollywood stars sleeping through ensemble pieces like this one, none of the actors seem like they’re going through the motions, rendering their basic characterizations more interesting than they have any right to be. Even at 55, Willis’ action hero skills are in top form, making his super-spy abilities entirely believable. Parker’s Sarah, with her this-is-so-cool attitude, appears as entertained by these spy goings-on as we are. And it’s impossible to take your eyes off Malkovich, who always seems to be making a goofy face; his complete submersion into his comic role proves his versatility.

Schwentke keeps the momentum going with a kitschy selection of music and jocular black-ops humor. The action scenes are lively and coherent, even thrilling, though cleaned up from the source material for a PG-13 rating. Red could have easily been a summer blockbuster, given the wowing cast, comic origins, and adrenaline-powered pacing. But there’s more here than merely another comic book movie looking to service fanboys alone. This is a crowd-pleaser for audiences who want to see Biff Loman carrying a pink pig stuffed animal filled with a grenade launcher; who want to see John McClane and the new “Bones” in brutal hand-to-hand combat; who want to see The Queen handle machine guns. What more could you want?