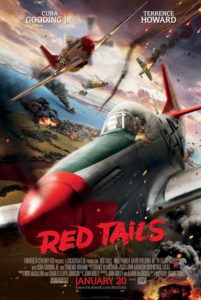 “Germans! Let’s get ‘em!” That’s the first line of dialogue uttered in Red Tails, a Lucasfilm production about the 332nd Fighter Troup, also known as the Tuskegee Airmen. They were the United States Air Force’s first African-American fighter pilots during World War II, and they overcame tremendous racism from their fellow countrymen to prevail among the war’s leading squadrons. Their story is an inspiration, as they were renowned for their bravery and skill against German fighters, and received multiple decorations for their heroism. Executive producer George Lucas, who has been developing the screen story for more than two decades and personally financed the production, reduces their story of racial triumph to a standard gung-ho war movie with no end of cornball dialogue to supplement the film’s true mission: to provide the audience with mindless Star Wars-style dogfights.

This is not to say that the script, written by John Ridley (Undercover Brother) and Aaron McGruder (The Boondocks) is completely without merit, but it does skip over what could have been the most dramatically significant piece of their story—how their unit was formed and the rigors of their training on Moton Field in Tuskegee, Alabama, despite the U.S. government’s outright skepticism. HBO produced a television movie in 1995 called The Tuskegee Airmen in which we follow the fighters from their training phase to their implementation in the sky. That film may not have had Red Tails’ array of special FX or wowing dogfights, but its involving narrative places emphasis on their struggle within an institution that, ironically enough, viewed them as “inferior” as a result of their race. Because of this, and its superior ensemble (including Laurence Fishburne, John Lithgow, and Cuba Gooding Jr.), that film will remain the best-yet version of their story.

Red Tails begins in 1944 in Italy, where we follow a group of bland characters in a polished WWII movie setting, each role defined by a one-note conflict. Squad leader Marty “Easy” Julian (Nate Parker) eases the pressure to succeed from his overbearing father with booze. Joe “Lightning” Little (David Oyelowo), the maverick of the group, has a desperate need to prove himself by showboating; he also has the most compelling storyline with a subplot about his sunny romance with a local Italian girl. The youngest pilot, Ray “Junior” Gannon (Tristan Wilds), doesn’t want to be called “Junior” anymore and tries to prove himself as a man. Supporting these worn down war movie clichés are the superior officers: Cuba Gooding Jr. appears as a pipe-chomping Major who gives an inspirational speech; Terrence Howard plays a straight-arrow Colonel that gives two or three inspirational speeches. The overall story follows the squadron as they go from executing unimportant missions 100 miles away from the front lines to earning their pride as they escort the first bombers flying into Berlin.

Though these men no doubt faced adversity at every turn until they proved themselves in the sky, the film glosses over their fight for equal rights. One scene is dedicated to Lightning’s unpleasant encounter with bigoted white officers in a bar, and another two scenes involve Howard’s character facing a racist Colonel (Bryan Cranston) in the Pentagon, but the racial tension was never meant to be the driving force of this film. Any racial concerns are absolved after a few successful missions when the film cuts to a white officer who all but says, “Gee, I sure was wrong about those colored pilots.” Delving too far into racial politics would undermine Lucas’ true goal for this project, which is to render CGI planes maneuvering around and shooting each other out of the sky. Lucas used archival footage of WWII air battles as inspiration for his bravado dogfights in his Star Wars films, and yet similar scenes here feel strangely derivative. We look on the fights in Red Tails with suspicion, as they occasionally look too much like X-wing and TIE fighters for comfort—they even sound the same (longtime Lucasfilm sound designer Ben Burtt reuses some of the same audio effects used in the Star Wars films).

Anthony Hemingway, a television director from The Wire and CSI: New York, gives the proceedings plenty of visual luster, but the story feels softened, perhaps by the reported reshoots in which Hemingway was not involved. Lucas’ fingerprints are all over this project, from the flat dialogue to the ineffective melodrama. One can’t help but imagine how someone like Spike Lee would have approached this story; undoubtedly with more veracity in its emotion and the racial conflict. Instead, Red Tails best aligns with propagandized war movies from the 1940s like Air Force or Flying Tygers, with blindly patriotic messages embedded into dialogue about duty and honor for one’s country. And for the small segment of viewers who are going to this film not to see an historical account of pilots who overcame prejudice on a grand scale, but who are going to see an actionized war movie, there are often exhilarating dogfight sequences to divert your attention. Sadly, this a disappointing and squeaky clean take on a story that deserved to be more than popcorn-munching fodder.