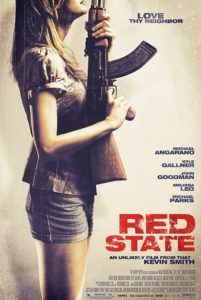 With elements of horror and ham-fisted social allegory, Kevin Smith’s Red State has a lofty set of goals that go unreached and become confused by his film’s inconsistent internal logic. This is a film that Smith himself has inferred would be controversial, if not socially confronting, and drastically different than his other work—so much so that at Sundance the writer-director insisted he would self-distribute the release, it being a passion project of considerable personal importance. After certain unfortunate realities sank in, the film found its home at Lionsgate, who demoted the release with an all-but-direct-to-video push. And just like its release, this supposedly challenging film arrives with a whimper, its ideas impotent and sophomoric and wholly unaffecting, despite the significant themes driving it.

The film opens with expositional scenes detailing the skewed beliefs of the Five Points Church, a twisted conservative Christian sect led by madman preacher Abin Cooper (Michael Parks), who’s a few shades more maliciously righteous than Fred Phelps (a connection that Smith is quick to downplay). Three teenagers (Michael Angarano, Nicholas Braun, and Kyle Gallner) hear from their schoolteacher and parents about Cooper’s fervent anti-gay views through sloppy dialogue that doesn’t advance the story but establishes the conflict, always hinting that Cooper’s people may have committed homophobic hate crimes on their stretch of land called Cooper’s Dell. As the teens plan to rendezvous with a lonely internet cougar on that very property, their pursuits would seem to be safe, except they’re being lured there in an elaborate if nonsensical trap. (Of course, this all takes place in the South.)

Before long, the teens find themselves captive in a situation recalling something from Hostel or The Texas Chainsaw Massacre, but blended with obvious Koreshian overtones. One of them wakes in cage situated in a church, listening as Abin Cooper sermonizes in a very, very long monologue about homosexuals being Satan’s earthbound servants and how God only loves those who fear and act out His wrath. (Parks is downright creepy in these scenes; if Red State is worth watching at all, it’s for his performance.) And by the time Cooper begins sacrificing his victims, Smith still hasn’t explained why a bunch of horny heterosexual teenagers are being “punished” by a church identified primarily through their anti-gay position. This seems to be the major device propelling the plot, and yet it simply does not make sense within the logic established by Smith’s otherwise self-conscious dialogue. Smith would have been better off making Stephen Root’s closeted gay sheriff the victim, if only for consistency’s sake.

At any rate, before long the police are involved. Cue another deplorably long scene of exposition as AFT Agent Joseph Keenan (John Goodman) explains to his superior, via Bluetooth, the history of his investigation into the Five Points Church purchasing illegal firearms. Shortly after, Agent Keenan’s team arrives to search Cooper’s Dell, at which point an excruciatingly long gunfight explodes and lasts most of the third act. Smith fans have learned again and again (most recently on Cop Out) that he’s not an action director, and here’s further proof. Smith and his longtime cinematographer David Klein shoot flaccid action scenes where actors do nothing more than hold a gun and shoot; rarely do we see the result of those shots, and rarer still does the editing imply action: As the sequence plays, there’s gunfire from an extremist. Cut to gunfire from random ATF soldiers. Cut to gunfire from a different extremist. Back to another AFT grunt. And so on. There’s nothing actionized or cinematic about it. It’s just shooting shootin’.

Smith’s most unsuccessful (and arguably his most important) element emerges when the ATF crew receives an order to eliminate the Five Points Church and use the excuse that they’re a suspected terrorist cell, which attempts to color the government goons as being just as “in the wrong” as the religious wackos. Smith hopes to create an amoral association between the two, which, if executed correctly, may have had greater resonance toward a condemnation of American policies. Instead, Red State spends so much more time painting the religious nutjobs as vile crazies that when the ATF arrives to shoot them down, the audience feels relieved, as opposed to confronted, by the hypocrisy of it all. This is with the understanding that Smith has no doubt intended his audience to feel guilty for such a reaction (and thus guilty for ostensibly demanding a second Iraq War, all but ignoring illegal rendition, etc.), but in his satiric, exaggerated little scenario, he could hardly expect us to weigh the moral implications of the ATF’s choices with any seriousness. After all, his film opens under lowbrow horror movie rules, after which all hope for importance is discarded in favor of more primal concerns for movie-style catharsis.

Still, at times his production looks good, with a most filmlike appearance to contrast the bland presentation of his earlier works like Mallrats and Chasing Amy. Quality actors such as Goodman and recent Oscar winner Melissa Leo (The Fighter) may draw some viewers, who will surely be disappointed that such talent filled such one-note roles. On the whole, Smith’s action scenes and dialogue border on pointless. Monologues go on for so… very… long… without any natural purpose within the story, whereas someone like Quentin Tarantino uses extended dialogue sequences to build mood or character or tension. In Red State, Smith seems to have lost any sense of how to tell a story through words, and he certainly hasn’t mastered how to tell a story through images. This is all on a long list of components missing or mishandled by Smith, in a film whose pretensions don’t live up to their own, self-purported hype.