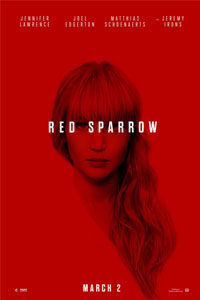 Francis Lawrence directed Jennifer Lawrence (no relation) in the last three Hunger Games films, bringing the series to life with subtle, workmanlike stylistic touches and a concentration on emotions. The director brings the same professional aesthetic to Red Sparrow; but given the film’s espionage trimmings, its emotions are understandably restrained. A lavish production adorned with gorgeous costumes and atmospheric locations in Vienna, Budapest, and London, the 139-minute thriller feels like a John le Carré adaptation whose intellect was removed for mainstream consumption. The film contains a sensationalized approach teeming with lurid situations, torturous violence, and the winding tradecraft of similar cloak-and-dagger scenarios. And though it might demonstrate that Jennifer Lawrence can elevate almost any role by radiating experience beyond her age, Red Sparrow nonetheless explores familiar spy genre territory from an unexceptional middlebrow perspective. It tries to satisfy both high and low demands, concentrating on the intricate machinations of spies as much as their brazen sex and violence, and sometimes sexual violence. But in trying to appease both extremes, the result is flat, if just reasonably diverting.

Red Sparrow opens by cross-cutting between two significant storylines: The first involves Bolshoi ballet dancer Dominika (Jennifer Lawrence). During a dazzlingly staged ballet sequence early on that cannot help but recall The Red Shoes, Dominika takes a nasty fall and breaks her leg, requiring her to have surgery. She will never dance again. Her incestuous Uncle Vanya (Matthias Schoenaerts), an official in the Foreign Intelligence Service (better known as SVR), recognizes Dominika’s strength after she takes revenge on the dancers who plotted her accident, and then enlists her to become a “sparrow”—an operative trained in seduction tactics to obtain information for the Russian government. Along with a class of fellow sparrows, she’s instructed by Charlotte Rampling, the chilly Matron, to “inure yourself to what you find repellent” and learn to “love on command.” Dominika is ordered to give her body to the State as a tenet of “whore school”—the State nourished her body and now claims ownership of it. But Dominika refuses to willingly use sex as a weapon in her arsenal; attraction and manipulation, however, remain valuable tools. After a short time as a sparrow cadet, her unwillingness to use sex defies the Matron, requiring Dominika’s uncle to defend her by arranging a final opportunity to prove herself to the domineering Russian patriarchy.

The second storyline, which soon collides with the first, follows Nate Nash (Joel Edgerton), a CIA Agent who must blow his cover to prevent his informant in the Russian government from being exposed. With Nate unable to return to Russia, his colleagues (Sakina Jaffrey, Bill Camp) send him to Budapest to reconnect with his mole through less direct channels. Meanwhile, Dominika has been tasked with seducing Nate and extracting the identity of his mole. Everyone talks about the mole as though it’s some great mystery. Unfortunately, the casting narrows the possibilities of the film’s enduring MacGuffin, the mole’s identity. The mole will, of course, be someone the film has already introduced and, to be sure, be played by a performer capable of evoking a spy’s steely resolve. Could it be Ciarán Hinds, who appears as the top official Zakharov? Or maybe General Korchnoi, played by Oscar-winner Jeremy Irons? It might even be someone like Uncle Vanya or Matron, both played by talented actors. In any case, the field is limited by the casting and, inevitably, feels inconsequential to the narrative.

Based on the 2013 book by retired CIA officer Jason Matthews, the screenplay by Justin Haythe (who somehow wrote both Revolutionary Road and The Cure for Wellness) fails to establish a compelling emotional motivation for Dominika beyond caring for her sickly mother (Joely Richardson). Vague allusions to her lifelong strength seem to justify her behavior, but where is the source of that strength? Her ballet training perhaps? It’s worth noting that Dominika never completes her sparrow training, which one must assume is long and rigorous. How many lessons did she miss? What spy gizmos and behaviors of human control did she never learn? Maybe her refusal to finish her spy education is why her behavior remains predictable, her motivations obvious based on whom she decides to sleep with and whom she uses to advance her mission. During her scenes in training, she learns to pick locks and how to use a nifty tracking chemical; later on, she uses only those skills she learned in the sparrow academy. This leads us to question how a novice spy has somehow masterfully worked both the U.S. and Russian intelligence agencies to her advantage. Although the film wants us to question whether Dominika is a double- or triple-agent, it’s hardly a mystery. How she’s able to fool everyone involved, except the audience, is the biggest mystery of all.

In the end, the film’s major misstep is a climactic sequence that insists upon revealing Dominika’s elaborate scheme by flashing earlier footage in our faces, thus putting the puzzle together, as if our feeble brains could not comprehend the rather simplistic plotting or remember what happened an hour earlier. Moments like this, however typical in Hollywood mystery-thrillers, remain insulting. Regardless, Jennifer Lawrence is an engaging screen presence, but no amount of acting on her part, or by the impressive cast, could smarten this material. A half-hearted attempt to inject a theme of female empowerment in a cruelly patriarchal society is surface level at best. Once again teaming with cinematographer Jo Willems, the director (who made the last three Hunger Games films with Willems) delivers another confidently mounted production, with few frills or cinematic ornamentations to note. Some curious inconsistencies distract, such as the disappearing and reappearing of the surgery scar on Dominika’s leg, or the phony eye-shadow appearance of Dominika’s black eye. But most of Red Sparrow looks slick and, somehow, doesn’t overstay its welcome, even while being mostly forgettable.