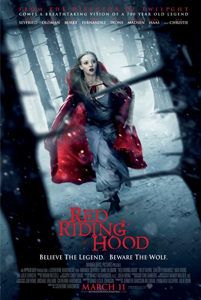 Red Riding Hood targets followers of Stephenie Meyer’s wildly popular vampire franchise, capitalizing on familiar elements of young love crossed with supernatural monsters. Pushing for that demographic, Twilight helmer Catherine Hardwicke directs and proves once more that paranormal thrills and action scenes are not her strengths. Despite its period piece facade, historical accuracy plays no role in this production, a fanciful storybook setting with young actors in fairytale dress, dolled-up with modern hairstyles, plenty of glittery makeup, and reading sometimes laughable dialogue in uncultured American accents. Moviegoers delighted by the post-modern, nonsensical stylings of A Knight’s Tale will feel right at home.

Situated in a nameless, make-believe forest deep inside an unspecified country, each full moon the frightened populace of Daggerhorn presents a local werewolf with a sacrifice, usually some manner of cute farm animal chained to an offering stump. But when the werewolf breaks their unwritten accord and kills a villager, the locals set out to hunt the beast. Amanda Seyfried plays the eponymous damsel, here named Valerie, who occasionally narrates to bring some structure to a narrative filled with misdirections. She hopes to marry the future-uncertain bad boy lumberjack Peter (Shiloh Fernandez), but at the behest of her mother (Virginia Madsen), she’s betrothed to the cowardly-yet-nascent blacksmith Henry (Max Irons). Her drunken father (Billy Burke) doesn’t seem to have an opinion on the matter, while Grandma (a still-beautiful Julie Christie) tells the girl to follow her heart.

Meanwhile, a local priest (Lucas Haas) hires a renowned werewolf hunter and religious zealot to save their village from the supernatural threat. Enter Father Solomon (Gary Oldman), an obsessed holy man bent on killing the werewolf during the blood moon (the only time when the monster’s bite will transform its victim into a werewolf), even if it means sacrificing some of the townspeople. Valerie finds herself at the center of Solomon’s investigation when she confesses the Big Bad Wolf spoke to her, psychically. The screenplay by David Leslie Johnson (Orphan) has more than a few components in common with Tim Burton’s Sleepy Hollow, another highly stylized storybook-come-to-life. Both involve an other-worldly killer taking lives in small village; an investigator is summoned, who reveals a series of dark secrets among the townsfolk; and after an overly complicated whodunit, the killer is revealed. The similarities between these two movies are a distraction, especially since Hardwicke’s tale lacks the humor and colorful performances of Burton’s.

Hardwicke and production designer Thomas E. Sanders (Eagle Eye) construct the surface polish of living folklore. Dense forests contain bright leaves on the woodland floor and jagged, thorny trunks encircle Grandma’s House. The production appears to have been filmed entirely on a sound-stage, making village scenes feel like museum dioramas populated by dramatically lit Hollywood actors. Aside from intermittent cutaways to second-unit footage of snowy mountaintops, which interrupt the contained storybook cohesiveness, impressive set design and a wintry color scheme help maintain the fantasy atmosphere. Other creative choices were made solely for the youth demographic. Consider how, during a festival sequence, Brian Reitzell’s score of largely brooding electronic tones is interrupted by modern quasi-rock songs, if only to sell an obligatory soundtrack to the targeted teens at Hot Topic.

Just like those shape-shifting wolves in the Twilight movies, here the Big Bad Wolf is realized using cartoonish and silly looking CGI. The creature bounds across the screen in unintelligible attacks no more thrilling than they are easy to follow, which is not at all. When Rick Baker is still winning Oscars for his innovative werewolf makeup designs, there’s no excuse for such lacking creature effects. The performances are just as unconvincing; otherwise impressive actors have little to do, their lines stale and clichéd beyond even Christie or Oldman’s extensive talents. Along with predictable turns in the plot, there are moments that fall down flat or could be read as unintentionally funny (during my prescreening, there was occasional snickering at moments of complete seriousness).

Produced by Leonardo DiCaprio’s production company Appian Way, Red Riding Hood sounds like a profitable idea, and indeed the end result will probably make money. But Hardwicke and Johnson have taken what could have been today’s equivalent of The Princess Bride or Sleepy Hollow and delivered a dull, shockless horror-romance that contains neither scares nor an involving central love story. This missed opportunity would have been better served by a director with more vision, and perhaps a complete rewrite. Instead, the production looks and plays like an expensive made-for-TV movie. Unless you’re a proud “Twihard” eager to find material that suits such popularized tastes, chances are you’ll find the experience a crushing bore.