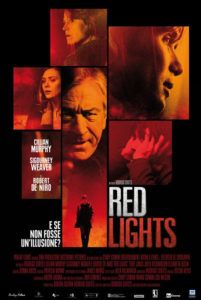 After the last film from writer-director Rodrigo Cortés, 2010’s ingenious and claustrophobic little thriller Buried, expectations were set high for his follow-up. Unfortunately, any hope that the young filmmaker would maintain his high level of Hitchcockian virtuosity is wasted on Red Lights, an indie suspenser picked up at Sundance by Millennium Entertainment, barely released in theaters, and forgotten after a slew of poor reviews. That the film wasn’t given a wider release comes as a surprise, however, considering it’s headlined by Cillian Murphy, Sigourney Weaver, and Robert De Niro, names with enough clout to pique this critic’s interest. Even its subject of paranormal investigators dispelling psychic hokum could’ve drawn an audience if marketed properly. But after watching this film, which disguises itself as an intriguing argument between paranormal belief and skepticism, it’s clear why Millennium didn’t release it wider: Had large audiences stayed until the end, Millennium would have been responsible for a rash of movie theater riots—or at the very least a surge in the demand for refunds.

Indeed, here’s a clunky slow-burner about university-level skeptics Dr. Margaret Matheson (Weaver) and her protégé Dr. Tom Buckley (Murphy) who lecture together on how faux psychics and mentalists convince duped audiences into buying their parlor trickery. The best parts of the two-hour runtime feature an intriguing level of deconstruction, where Matheson and Buckley demonstrate how professional mediums make tables levitate and bend spoons with their minds. Their meagerly funded department competes with the university’s top Scientific Paranormal Research Center, headed by rival Dr. Shackleton (Toby Jones), who’s made to look foolish on more than one occasion when Matheson points out how easily he’s been hoodwinked. Both Matheson and Buckley seem to be devout disbelievers, the former because of her experience with her comatose son, while the latter’s reasons are more elusive. Elizabeth Olsen (Silent House) plays Buckley’s live-in student and tagalong girlfriend who’s present for the sake of being present.

Enter Simon Silver (De Niro), a renowned superstar psychic and former talk show performer who has just made a comeback after a 30-year retirement. In an unnatural introduction, Silver steps off a plane and removes his sunglasses for no other reason except to show us the milky white eyes of a blind man; once that image has been established, he puts his glasses back on and proceeds to the tarmac. Despite his lack of eyesight, Silver’s powers of “second sight” are considered so convincing that not even Matheson will approach him, having instilled a mere moment of doubt in her otherwise unshakable disbelief long ago. But Buckley remains obsessed, wanting to subject Silver to their rigorous series of controlled tests that effectively determine if someone’s the real thing or not. Thus far, they’ve never found an authentic paranormally-powered individual. As a procession of creepy occurrences start to compile—birds crashing into Buckley’s door and windows, random power surges, an unexpected death—Buckley’s fanatical drive to disprove Silver sends him on a frenzied quest.

For the first two-thirds of Red Lights, Cortés builds his suspense with eerie moods and dark lighting courtesy of Xavi Gimenez’s slick, crisp lensing. Composer Victor Reyes creates an effective atmosphere of mystery through his subtle score, but he’s no Bernard Herrmann. Most effective is the weight of Cortés’ cast, drawn to the material no doubt by the promise of Cortés’ talent as shown in Buried. De Niro’s larger-than-life presence alone, for example, forces us to question whether or not Silver is what he claims to be. He orates on stage about his abilities and displays expert composure during televised interviews, and his tricks seem inexplicably real next to the charlatans that came before. Weaver, whose role was written with her in mind, gives Matheson immediate authority and charm, but her character is written off far too early in the film. And then there’s Murphy’s role, which comes with some questionable turns. He’s a talented actor to be sure, yet he’s burdened here by a last-minute twist conveyed through voiceover and flashbacks that feel like it was tagged on during post-production.

The last act—nay, the last five minutes—drop such a preposterous bomb on the audience that any merits offered by the film are completely invalidated, leaving us angry and annoyed for having just wasted two hours. Red Lights spends the bulk of its runtime exploring the world of skeptics, and when it asks its audience to swallow some incongruous, ill-conceived, last-minute piece of fantasy, the dramatic shift fails to set and for a moment feels like wild incoherence. One can’t help but feel the conclusion was someone else’s idea and not that of Cortés. Nevertheless, after a random scene of violence followed by a climactic one-on-one confrontation before a thousand spectators, Cortés’ finale achieves a degree of infuriating stupidity that only M. Night Shyamalan has managed before. All of the actors in this impressive cast deserve better than the cornball paranormal yarn they’re ultimately a part of. What a shame, given the interesting elements and performances that came in the first two acts. Alas, we’re left with nothing else except the hope that this talented director’s next project fares better.