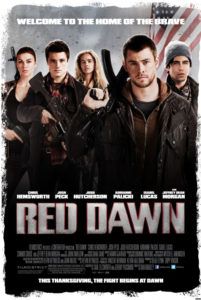 When North Korean troops invade Spokane, Washington, a ragtag bunch of local teens band together to form an uprising. “We’re living Call of Duty,” says one insurgent. “And it sucks.” What a perceptive observation, one audiences will no doubt share toward Red Dawn, a ludicrous remake of John Milius’ 1984 cult favorite which starred Patrick Swayze, Jennifer Grey, and Charlie Sheen. An illogical mishmash of bad ideas and poor execution, here’s a movie that doesn’t bother trying to counteract its own outlandish implausibility, though realism is exactly what might’ve given the proceedings an edge. Indeed, longtime stunt coordinator and first-time director Dan Bradley’s production fails to evoke a single relevant political or dramatic notion; its circumstances instead feel borrowed from a video game, not from the headlines. Filled with corny speeches and uncharismatic performances, there’s not one iota of dynamism to this dull action fodder.

During the opening credits, we’re shown jumbled newscasts outlining a bogus political situation leading up to North Korea attacking the Pacific Northwest. You might ponder just how (very) far-fetched it is for North Korea to ever invade a country umpteen times in size and population. You would be right to ask such questions. One might argue that, thematically, it’s to demonstrate a Tea Party notion that the current administration has spread America thin and left her borders unprotected, except there’s no prevailing thesis offered to justify such a claim. Consider instead how the movie, which finished filming three years ago with China as the central villain, was put into limbo during MGM’s financial crisis. Delays gave Hollywood executives time to reconsider, and given China’s huge market for American cinema, they opted to change the bad guys to North Koreans (with a little Russian flair for good measure). After some reshoots and digital touchups to replace Chinese flags with North Korean ones, the resulting setup is left completely neutered and nonsensical. Laughable even.

The action follows Milius’ structure closely, beginning with a high-school football game, and later paratroopers dropping from the sky in Anytown, USA. The local quarterback for their team, called the Wolverines, is the selfish Matt (Josh Peck), whose gallant older brother Jed (Chris Hemsworth) has returned home from the Marines just-in-the-nick-of-time. At the first signs of invasion, Jed, Matt, and a few others (played by Josh Hutcherson, Edwin Hodge, Connor Cruise, and Adrianne Palicki) escape into the protection of the mountains, where they quickly train themselves to become resistance fighters under Jed’s leadership. Instilling hope in their captive hometown, the maquis group dubbed “Wolverines” launch several attacks against the North Korean captain (Will Yun Lee), and eventually learn the enemy keeps America powerless with some electromagnetic pulse doohicky. Meanwhile, Matt can’t stop whining about his girlfriend, Erica (Isabel Lucas), and he botches a number of missions and causes at least one unnecessary death to get her back. It’s unclear why Matt isn’t dejected from the group for his irresponsibility, nor is it clear how Erica redeems Matt by making herself useful after she joins the group.

So many frustrating and obvious questions remain that a moviegoer can’t help but ponder why the filmmakers weren’t asking these questions themselves: What’s the ultimate goal of the North Koreans? Why didn’t more people resist? Does no one in Spokane own guns? Why aren’t American troops fighting at the borders? What are the Russians helping North Korea? Is the invasion national, or limited to Washington State? The timeframe is vague; how long does it take for the North Koreans to establish control? Such concerns were answered in Milius’ film, and the invasion’s war strategy became a recurring historical theme tied back to Genghis Khan. Another question: How did the filmmakers ever expect to effectively outline this complex situation and a dozen characters within a brief 93-minute runtime? The movie jumps around and never gives us a plain idea of what’s going on. Now more questions: How does Bradley expect us to understand what’s going on when he uses the now-standard garble of shaky camerawork? Why does Matt’s phone work while all other electronic devices are fried? And again, why is Matt allowed to be such a selfish douche bag?

If Milius’ Red Dawn is not fondly remembered in all circles, at least embedded into its flaws were likable characters and a situation that felt realistic within 1984’s Cold War paranoia. This remake has none of those qualities. Moreover, a situation like this one is more believable thirty years ago, before instantaneous satellite tracking and smart bombs and other toys of modern warfare. At any rate, Hemsworth makes an ample action hero, but his character is too one-note and uninteresting, unlike his rendering of Thor. Peck’s presence becomes more and more grating as the movie carries on, and by the time his character is giving his gung-ho speech, it’s downright comical. Finally, Red Dawn might’ve gotten away with avoiding any political commentary if, as an alternative to relevancy, the movie proved to be extraordinary fun. Alas, this garbage is neither relevant nor fun—just mindless explosions and blind pro-American nonsense with no rational context whatsoever.