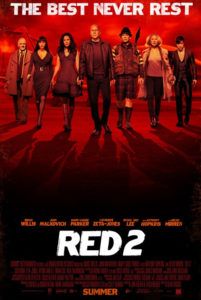 Curious is Summit Entertainment’s decision to make a sequel to Red, the disposable-if-entertaining actioner from 2010 that made somewhere around $200 million worldwide. Inspired by writer Warren Ellis and artist Cully Hamner’s graphic novels published by DC Comics, Red 2’s screenplay by Jon Hoeber and Erich Hoeber does not follow a specific plotline from the comic; rather, it caters to everything moviegoers would expect from a blockbuster sequel. Following Hollywood’s “bigger is better” policy, the scenario finds every excuse to get the gang back together again, and the attractive cast of senior citizens globe-trots to various exotic locales on a mission to save the world from obliteration. Of course, this doesn’t mean that the chummy nature of this now-franchise and its cast of likable actors has been abandoned. Regardless of the higher stakes, the company of “Retired and Extremely Dangerous” international agents and hitmen still manage to act as though they’re on holiday.

Falling somewhere in-between Ocean’s Eleven or The Expendables in terms of quality, this ensemble picture never takes anything that’s happening too seriously and remains dependent on its cast of affable performers: Bruce Willis, Mary-Louise Parker, John Malkovich, Helen Mirren, Brian Cox, and the new additions of Catherine Zeta-Jones, Anthony Hopkins, Lee Byung-hun, and David Thewlis. The movie glides effortlessly from one sequence and locale to the next, hopping from London to Hong Kong to Paris to Moscow with no more difficulty than its slickly animated transitions based on Hamner’s artwork. The script doesn’t bother explaining key plot points along the way, such as when John Malkovich’s overplayed Martin Boggs dies in an early scene and even has an open casket funeral. When Boggs shows up again a few minutes later, there’s no explanation as to how he pulled off the trick. We’re simply meant to accept the airy quality of whatever’s onscreen. Don’t ask questions; just go with it.

Resigned to a quiet life in the private sector, former black-ops CIA agent Frank Moses (Willis) has grown somewhat overly protective of his wild-at-heart civilian girlfriend, Sarah (Parker). But Frank is dragged back into a life of danger and intrigue when his previous employers detain him for questioning about “Nightshade,” a Top Secret mission in which he and Boggs participated back in the 1970s. Pursued by ruthless U.S. official Jack Horton (Neal McDonough), who hires the world’s most dangerous assassins to take Frank out, our hero must not only find out about the MacGuffin but protect Sarah from danger in the process. Along the way, he reteams with Boggs, ex-MI6 killer Victoria (Mirren), and his former flame—the Russian spy Katja (Catherine Zeta-Jones, orange-tanned and under a slathering of mascara). Later, they contend with Han (Korean star Lee, from The Good, The Bad, The Weird), who’s described as “the best contract killer in the world”, an arms dealer known as “The Frog” (Thewlis), and the fiendish scientist Edward Bailey (Hopkins).

Red 2 has the opportunity to be more than a series of flashy situations, but it would rather not be. The movie never considers consequences, not even when given the occasion and almost the intention of doing so. Throughout, Sarah watches with revulsion (as opposed to her enthusiasm in Red) as Frank demonstrates his readiness to do horrible things in order to procure information or stop the bad guy; and there’s a moment when Sarah herself is forced to do something horrible, and her choice takes a toll on her for no more than an instant. Afterward, the screenwriters never address how she felt about what she had to do, despite the hints throughout the movie that she’s uncomfortable with that sort of thing. But then, if either the audience or the characters pause for too long to think about anything that’s happening in this movie, we’d all realize it’s absurd and stop watching altogether.

Dean Parisot (Galaxy Quest) takes over directing duties from the first’s Robert Schwentke, and he improves the material’s action but applies far too much comic relief. The overly fun-loving tone of Red 2 prevents us from feeling truly involved. A number of martial arts fights featuring Lee are impressive, and there’s a shootout or two that provide some thrills. However, nearly every character save for Willis is designated for comic relief. Especially grating is Malkovich’s oddball routine, which grows tiresome since he’s virtually always onscreen. Then again, Mirren shines in one scene where she pretends to be a lunatic, and Hopkins’ fun absent-minded professor quickly takes a turn into a juicy villain. Willis, as always, makes a compelling hero, and his chemistry with Parker remains intact. But momentary pleasures like these have thin connective tissue binding them together into a satisfying whole. It’s all very watchable, but it’s also incurably forgettable.