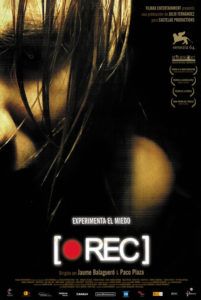 Shot in the found-footage style of The Blair Witch Project, the 2007 Spanish horror film [Rec] would later provide the basis for the technically impressive, albeit crucially different remake Quarantine. Directed by Jaume Balagueró and Paco Plaza, and also written by the duo with the help of Luis A. Berdejo, the film uses panic-causing and incoherent shaky-cam visuals to propel substance-less characters through a whirlwind of increasing frightening this-isn’t-happening scares. The result is infectiously entertaining and certainly worth seeking out for horror fans, even those familiar with its remake.

The film opens on Ángela Vidal (Manuela Velasco) and her off-screen cameraman Pablo as they shoot their documentary television series While You’re Asleep. Their episode tonight focuses on the twilight activities of firefighters at the Barcelona fire station. Ángela conducts her boring interviews and talks to Pablo on camera until the firefighters receive a call that someone has fallen in an apartment complex. When they arrive at the scene, camera rolling, a policeman is already there. The building’s inhabitants are gathered in the lobby, tired and complaining. The crew investigates the apartment of the woman who fell, and what they find is a scratching, hysterical person covered in drool and blood, obviously agitated or infected with who-knows-what. She attacks the crew, biting one of them on the neck, and as they seek medical assistance outside they discover they’ve been locked in by order of biohazard protocol.

What proceeds is a frantic situation where the enclosed camera crew, civil servants, and building attendants slowly realize they’re trapped in the building with crazed, probably diseased lunatics. When they bite, the infection spreads, and there are more infected for the remaining few to contend with. It’s your typical zombie scenario but confined within three floors of narrow staircases and dark apartments. The cameraman runs about, shaking the camera, blocking his face with it during attacks. The sound pings out when an infected strikes the microphone or the camera is altogether dropped, and we’re left watching at an angle that shows us very little. And the less we see, the more scared we are.

The differences between the original and Quarantine are few, though they’re enough to leave the audience more intrigued in the original’s finale over the remake’s, yet more appreciative of the remake’s use of light or lack thereof. For the majority of [Rec], hallway lights fill the apartment complex and electronics appear to work, missing an opportunity for claustrophobia that the remake grasps to effective degrees. Quarantine suggests that the authorities shut the building’s power down, while also stopping all telephone, internet, radio, or even television capabilities within, leaving those inside trapped and completely cut off from the outside world. What’s more, the remake’s complex is lit with darker, more engaging lighting that the low-budget production of the original.

And then there’s the ingenuity, or lack thereof, with the ending and the explanation of the plague. (Please read no further if such plot details matter to you.) Quarantine implies that the disease was the result of super-rabies engineered by the building’s penthouse attendant, who, according to the Armageddon-themed cutouts pinned about his quarters like wallpaper, developed the disease to cause the end of the world. It’s a somewhat typical answer, all-too-common in zombie or zombie-esque movies. The refreshing difference with [Rec] is that their disease was propelled by a different kind of nut, a religious man working to isolate the chemical equivalent of demonic possession. According to the fanatical cutouts on his walls, the church found a young girl who was a bona fide possession case, handed her over to the penthouse attendant, and he attempted to extract the possession in a physiological sense to find a cure. Obviously, things didn’t work out too well.

Anyway, this rather clever difference has audiences, religious or not, believing in possession the same way they did after viewing The Exorcist. What’s more, the details of what cause the outbreak are decidedly more satisfying from a viewer’s standpoint, in that the last thing the film industry needs right now is another pseudo-zombie movie. But [Rec] proves to be an enjoyably jump-inducing ride into the horrific and panicky, moving so fast (in part due to the very short, barely-feature-length running time of 77-minutes) that it’s over seemingly in the same instant that it starts. In typical found-footage movie form, the ending does not satisfy on any dramatic level, but it doesn’t need to, because it’s done such a good job scaring the bejesus out of us. That energy allows audiences to overlook any flaws in the film’s nonexistent character design and be enveloped into a terrifying situation constructed with impeccable skill.