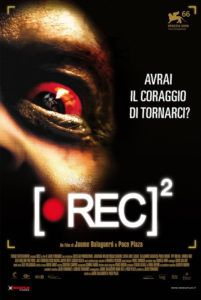 Ever since James Cameron’s Aliens, it’s been a typical and unfortunate trend, specifically in horror and science fiction films, for sequels to assume that bigger is better. That mark is often achieved by taking a small, personal concept of a movie, such as Ridley Scott’s masterful Alien, and incorporating soldiers and an overblown plot into the equation. Cameron succeeded in expanding Scott’s universe while retaining some emotional clarity, although his sequel is by no means superior to its predecessor. Co-directors Jaume Balagueró and Paco Plaza employ an excess of plot and production value in their sequel [Rec] 2, and unlike Cameron, they throw away nearly everything that made its processor work.

The over-written, over-produced, and altogether overzealous sequel picks up exactly where the 2007 hit [Rec] left off. After being dragged into the darkness by the possessed, now-grown and grotesquely contorted Medeiros girl, the subject of a church-led scientific exploration to isolate the biological answer to possession, the late-night docu-TV-show host Ángela (Manuela Velasco) is presumably dead (hint: note the lack of confirmation). Inside a quarantined apartment building in Barcelona are near a dozen victims infected with a disease form of demonic possession, all derived from the Medeiros girl. So when the sequel opens, the cavalry has been summoned: an official from the Ministry of Health, Dr. Owen (Jonathan Mellor), accompanied by a highly armed four-soldier escort.

Shot in shaky-cam style, the “found footage” story proceeds because the soldiers are each fitted with a helmet-cam. A primary camera is held by one of the soldiers, although he can tap into any one of his teammates’ cameras at any time, allowing for multiple perspectives. This effect, while it somewhat defeats the purpose of a found-footage movie, remains entertaining when three of the soldiers lose track of their friend, so they tap into his camera to witness, from a safe distance, his grisly demise. Mid-film, the soldiers’ story is interrupted by a group of teenagers who have snuck into the quarantined building and found themselves trapped in three floors of horrific zombie-esque terror—and wouldn’t you know it, they’re carrying a camera too.

The plot becomes increasingly absurd as it progresses, getting away from the simplicity of the original, where people with a camera run away from scary things in the dark. Here, Dr. Owen, who turns out to be a priest sent by order of The Vatican, must get a blood sample of the Medeiros girl before leaving. Despite the horrors unfolding before him, he refuses to allow the others to leave. And since they’re locked inside, with any attempt to escape thwarted by the authorities outside, they need Dr. Owen’s verbal say-so before they can escape. What’s more, it turns out that the possession-infected victims of the Medeiros girl’s engineered disease are actually under her control. So there’s that. If by explaining all this nonsense you feel this review has ruined the movie for you, understand it was done simply to let you know what silliness you’re in for.

Balagueró and Plaza have turned their creepy, claustrophobic concept into a near-comical superhero horror movie resembling something like Legion, except not so awful. Technically, these guys know how to make a scary movie with plenty of momentum. By the end, through all the twists and turns of plot and camera perspective, [Rec] 2 is simply too much excess to enjoy. One thing’s for sure, given the slightly altered ending of the [Rec] remake Quarantine—which made no mention of the Medeiros girl or possession, rather suggested an end-of-the-world plague was being engineered by a fanatic—Hollywood will have a hard time remaking this one.