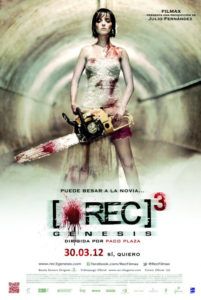 After this year’s breakout hit, Chronicle—a superhero movie shot in the “found footage” style, but with oddly well-developed characters and a satisfying conclusion—everything we know about the limitations of this usually horror-themed subgenre has been tested, and its expectations haven henceforth been raised. As a result, run-of-the-mill shockers—those redundant stories about people running away from scary things in the dark with a shaky camera that captures it all on video just before the inevitable demise of those involved—are now even more pointless than they used to be. Even Spanish filmmakers Jaume Balagueró and Paco Plaza, creators of the “found footage” horror movies [Rec] and [Rec]2, have grown tired of the limitations inherent to the subgenre’s POV-style terror.

Take the third entry in their series, [Rec]³: Génesis. Balagueró opted not to return this time around, while Plaza remains the sole director and receives co-writer credit (along with Luiso Berdejo). And though Balagueró’s proposed fourth entry (called [Rec]: Apocalypse) is on the way, he’ll return to find his franchise a little the worse for wear. The hook this time features a wedding video DVD menu introduction and slideshow, and footage from a Barcelona wedding recorded by two wedding videographers. It’s The Big Day, and the nervous bride Clara (Leticia Dolera) has a secret to tell her husband-to-be, Koldo (Diego Martin). (Hint: It’s not about zombies.) The cameramen capture the usual allotment of wedding day jitters, zealous celebrating, a beautiful ceremony at a massive rented estate, and a thumping reception. Then, all at once, Koldo’s smiley uncle, a veterinarian who earlier in the day was bitten by a dog, bursts into a zombie rage, as do a number of other guests. All hell breaks loose, and death is everywhere. Outside, authorities set up a perimeter, and men in hazmat suits scan the area. Inside, Clara’s white dress gets a few red stains.

The first 22 minutes until this inevitable outburst of zombie-esque violence are shot in the usual shaky camera style attributed to “found footage.” And then, with less than an hour left of the 80-minute runtime (a total including credits; actual screen time is about 74 minutes), the title card finally appears onscreen after one of those obligatory “found footage” arguments. You know the kind: One person yells, “Why the hell are you filming this!” The cameraman argues, “Because people have a right to know!” There’s a tussle, and the camera falls to the floor. Almost everything after this point in the movie is shot from a standard third-party perspective, replacing a wobbly subjective camera with smooth Steadicam movements from cinematographer Pablo Rosso. Since Plaza ditches the “found footage” premise a third of the way through his movie, an argument can be made that the director has resolved to place more importance on characters than the device with which they’re filmed, but the characters themselves have a range limited to corny soap opera stereotypes and campy horror movie clichés, so we’re hardly involved.

We sort of care that Clara and Koldo are separated from each other within their respective groups of survivors, none of whom understands what’s going on. Except for the priest, of course. Remember that the zombie things of the [Rec] series are not flesh-hungry undead raised from the grave, rage-infected plague carriers or victims of super-rabies. Rather, they’re sick with a form of demonic possession transmitted through blood and saliva. As such, the local chapel provides a sanctified safe haven for survivors (who, of course, try to escape anyway), and praying is an effective means of stopping an onslaught. Clara and Koldo fighting to reunite through this mess of former-family-and-friends-turned-bloodthirsty-demons provides the audience with some concern, except Plaza has opted to forgo the series’ otherwise serious tone for campy laughs and cheap horror thrills.

In visual gags smacking of Sam Raimi, Koldo garbs himself in medieval battle armor courtesy of a St. Georges shrine, while Clara protects herself with a chainsaw that conveniently happens to be lying around. They hack and slash and saw their way through countless baddies to reunite, only to face a conclusion reminiscent of the scenes that almost earned Paul Verhoeven X-ratings in Robocop and Total Recall. Along the way, a number of colorful characters crop up. For example, the wedding party hired an entertainer for the children, a guy in a goofy foam costume named “SpongeJohn,” named so because, he admits, there are rights issues with using the name “SpongeBob.” Speaking of royalties, there’s another character who attends the wedding solely to track the songs used by the DJ so royalties can be collected later. The survivors dub him “Royalties,” and he gets it particularly bad.

[Rec]³: Génesis is all very inconsequential and feels like a spinoff from the previous two movies, unconnected and self-contained. Unlike his work on the earlier entries, Plaza’s motivations are no more complicated, and his execution is no more impressive than any number of cheap horror projects released every year. It’s exceedingly gory, more so than its predecessors, and its lack of technical ingenuity and half-hearted use of the “found footage” device somehow makes it less interesting. (This is strange, considering I believe the subgenre to be almost fundamentally incapable of satisfying an audience (as stated earlier, Chronicle is the exception)). At any rate, Plaza has succeeded only in obliterating any evidence of his European sensibilities as a filmmaker in favor of tired Hollywood standardization. Sign him up for the next Paranormal Activity sequel.