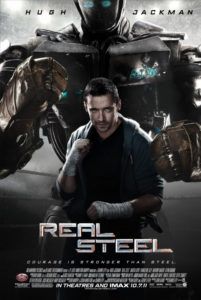 According to Real Steel, Dreamworks’ new sci-fi family film, over the next 8 years the sport of boxing will fade away only to be replaced by high-tech robot death matches where remote controlled automatons punch each other into scrap metal. If you’re thinking this sounds like “Rock’em Sock’em Robots: The Movie”, then you’d be right—although the film has no direct correlation to the toy, aside from obvious similarities in concept. We learn that a video game- and violence-obsessed culture demands more carnage, and only robots that tear each other limb from limb can provide. Given that Comedy Central’s show BattleBots was canceled years ago due to waning interest, and that the current state of robotics is nowhere near the advances suggested here, the unlikely notion that by 2020 such developments will come to fruition sours any prospective credibility.

Based “in part” on the 1956 short story Steel by Richard Matheson (author of stories that inspired I Am Legend and The Box), the script by John Gatins does little to improve its source (curiously, Dan Gilroy and Jeremy Leven receive story credit). Originally adapted into a 1963 episode of The Twilight Zone starring Lee Marvin, Matheson’s story and the more concise show version had enough sense to explain that boxing was outlawed, making robot fights a necessary replacement. Instead, director Shawn Levy’s film, produced by names like Steven Spielberg and Robert Zemeckis, uses this setup to retread worn down sports movie conventions in an entertaining, if nauseatingly familiar way. Herein are common underdog elements from Rocky and Over the Top, with the clanging metal bouts of 1990’s Robot Jox re-ornamented by the machines from Transformers for effect(s).

Hugh Jackman plays Charlie, a fast-talking hustler and former boxer who fights robots at county fairs and underground venues. After an opening scene involving an eyebrow-raising tussle between Charlie’s bot and a bull, Charlie discovers an estranged former lover has died and she has left their now 11-year-old son in his custody. Plucky, smart-mouthed kid Max (Dakota Goyo) is quickly signed over to the lover’s sister (Hope Davis), except for the coming summer months during which Charlie has to begrudgingly babysit. Charlie wants nothing to do with the boy, his mind set on earning his fortune as a promoter and rekindling a flame with robo-gym owner Bailey (Evangeline Lilly) in a perfunctory love subplot. But Max proves to know much more about robots than his dad would expect. Scrounging for parts in a dump, Max unearths an abandoned sparring bot called Atom (pronounced “Adam” throughout), a machine not meant for title bouts, rather to coach the bigger guys.

Of course, being a kid, Max uses his fine-tuned knowledge of videogames and robotics to engineer Atom with voice-recognition software and augments its already useful shadow-boxer feature. Using Charlie’s skill as a fighter to train the mindless bot, they take their find on the road and earn a name for themselves as unlikely winners. Charlie shows Max how to control his new toy with a fancy keypad, and before you know it, they’re in the big leagues against the current champion, Zeus, who’s backed by two ultra-rich, glaring-eyed villains: designer Tak (Karl Yune) and his bankroll Farra Lemcova (Olga Fonda). It all ends with a “David and Goliath” fight that gets the blood flowing, even if the fighters have motor oil running through their veins. Throughout, Charlie calls the boy “Kid” and Max calls his dad “Charlie”, until the end when, as expected, they’re hugging and teary eyed and finally call each other by their father-son titles.

Humans would seem to drive the story as they place their aspirations in the victory of their robots, but the action takes place in the ring as slick bot designs smash each other into bits during emotionless battles. Spielberg’s A.I. Artificial Intelligence is the grown up brother to this comparatively dim “family” effort (PG-13 violence and language may be too much for younger viewers), exploring several of the same themes with greater detail and artistry. For example, Real Steel’s bouts recall the “Flesh Fairs” from A.I., where hordes of screaming human fans drool as robots are ripped apart. Spielberg imbued his “mecha” with human qualities however, bringing into question humanity’s jealousy toward the perfection of a robot lifeform. But Levy’s robots have no personalities for themselves, despite his (woefully ineffective) attempts to imply a human dimension with ponderous shots of Atom’s glowing, unresponsive eyes. Atom never moves unless told to do so by voice command or shadow-boxing mimicry, yet the characters say they know there’s something more, something self-aware under Atom’s metal exterior. We never see what that might be. One keeps hoping the story will bring another dimension to the robots, but no evidence is offered to contradict their presence as empty fighting machines.

A combination of top-notch CGI and animatronic designs by Jason Matthews bring the robots to physical life—there’s not a moment in which we’re not entirely convinced these bots are tangible, even if their complete lack of personality makes any hope for connecting to them impossible. Fortunately, the actors have more personality. Goyo (who appears in Thor as the young hero) steals the show, lending Max a spitfire persona that somehow offsets Charlie’s awfulness. Indeed, Charlie’s complete disregard for his responsibilities as a parent make him a despicable character, even though he finally surrenders to his fatherly instincts and reforms. Jackman’s energetic performance and general amicability as a performer wash over the character’s abrasive qualities—he belittles Max and abandons him in a dangerous situation more than once—but just barely. Had another actor been cast, the role wouldn’t have worked, and audiences would find themselves struggling to care.

But why worry about things like character and story logic when flashy robot battles showcase your film? Much about Real Steel relies on surfaces, from the production’s admirable polish to mindless robot punch-outs designed to entice gamer crowds. And thanks to several arena settings, a wealth of product placement informs audiences that ESPN and Bing are still alive and well in 2020. Superficiality drives the production, which like Atom is recycled from leftover parts into a glossy new entity; though unlike Atom, this film does not do the unexpected, even for this admitted sucker for boxing movies. A resoundingly optimistic, syrupy finale adheres to the subgenre’s formula to the letter and promises an already-in-development sequel to progress (if box-office receipts turn a profit). Mainstream audiences will no doubt gather toward its blatant commercialism, but few will see this as anything but a tired old cast repressed and coated with a shiny new layer of wax.