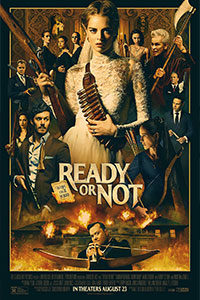 Rich people are the worst. That’s the prevailing message of Ready or Not, a violent and hilariously sadistic dark comedy about a new bride who must play a deadly game of hide-and-seek with her freakishly rich in-laws. One-percenters are, after all, an abnormal minority of people whose lifestyles somehow remain mysterious, fascinating, and absurd to the rest of us. Then again, perhaps it’s enviable to some to have that much money. But between the examples of Charles Foster Kane, Jean Paul Getty, and Donald Trump, being super rich has lost its appeal. It seems having untold amounts of money and power turns you into a materialistic and elitist monster, crushing your soul in the process. And the potential loss of one’s soul is precisely what’s at stake in Ready or Not. This social critique provides an undercurrent to an otherwise fast-paced and funny horror-comedy, which volleys between predictable twists to unexpected shocks. For those of us capable of laughing at copious amounts of bloodshed, it’s a good time at the movies.

The setup could be described as “Get Out meets The Most Dangerous Game.” The young bride Grace (Samara Weaving) has journeyed to the secluded family estate of her future husband, Alex Le Domas (Mark O’Brien). The Le Domas family comes from old money, having made its fortune on board games. By contrast, Grace is a former foster child who grew up without a family, and so her WASPy future in-laws seem like they’re from another planet, doubly so. They have a curious dynamic and odd family rituals, as other people’s families always seem to have. Alex, who has been somewhat estranged from his domineering father Tony (Henry Czerny, dialed up to 11) and mother Becky (Andie MacDowell), warns Grace about this before they take their vows. “I’m giving you an out,” he tells Grace with a sense of unexplained dread. Then again, the scream-filled and bloody prologue, complete with masked bluebloods and hints of the masked orgy in Eyes Wide Shut, suggest that Grace should be afraid, very afraid.

As it turns out, whenever someone new joins the family through marriage, the Le Domas clan gathers at midnight in a ceremonial space, deep in their mansion, where the new candidate must play a game before officially becoming one of them (“Gooble gobble”). She might have to play checkers, Go Fish, or backgammon, but the all-important rules, which become clearer as the night goes on, say that she must play. Ready or Not builds tension by cutting to the anxious, guilty glances between the family members, who worry about which game Grace will pick in the almost ritualistic selection process. When she chooses “Hide and Seek,” some in the Le Domas family, like Alex’s depressive brother Daniel (Adam Brody), look mournful. Others, such as the vampiric-looking Aunt Helene (Nicky Guadagni), appear almost gleeful. As for Grace, she’s just confused, almost bemused, and disappointed that she’s not with Alex consummating their union. But she soon discovers that the game is really a hunt, and she’s the quarry. 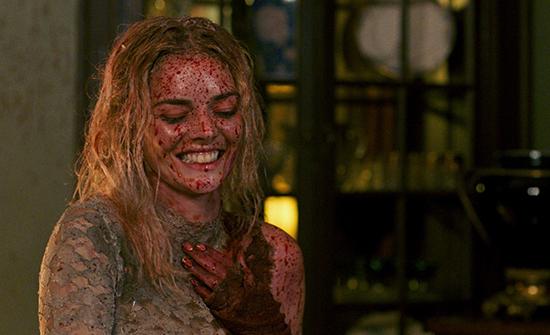 What proceeds is an effective cat-and-mouse thriller, where armed and frequently unprepared rich people stalk Grace through their expansive manor, intent on killing her. It’s not as though they’re just wealthy sportspeople with a lust for hunting the less fortunate classes like the characters in Hard Target (1993) and Surviving the Game (1994). The Le Domas family members must carry out this ritual or else their lives and souls may be in jeopardy—or at least, that’s what they believe. Did their ancestors really make a pact with Satan, or does the family remain blindly devoted to tradition because they believe it keeps them flush? One hardly has time to think about it, as the screenplay by Guy Busick and R. Christopher Murray moves at a relentless pace, putting Grace into a series of breathless and grotesque situations. As the new husband and wife team up against the rest of the family, the well-to-do setting, frequent bits of sarcastic humor, and violent deaths brought about by random weapons bring to mind the recipe that made You’re Next such an edgy siege movie.

Ready or Not isn’t as good as Adam Wingard’s home-invasion yarn from 2011. It’s “a Radio Silence film,” as Matt Bettinelli-Olpin and Tyler Gillett, two-thirds of the thus-named filmmaking consortium, are credited here as directors. They’ve been meandering around the horror scene in the last decade, contributing short films to anthologies (some with Wingard) such as V/H/S (2012) and Southbound (2016). Their first feature, Devil’s Due, earned a bundle in its unfortunate January 2014 release slot, despite largely negative reviews. Their second feature is far more accomplished, confident, and enjoyable than anything they’ve made before. The visual palette, rendered in amber hues, gives the movie a candle-lit appearance, and the cutting is efficient and straightforward. What works best about the movie is the careful balance of humor and horror, which genre fans will appreciate. At any moment, we’re laughing or gasping or gagging or wincing, and all with a sense of fun. The filmmakers often break the tension with humor that’s punctuated by a gory death (Ready or Not’s funniest piece of prop comedy involves a crossbow).

This is a star-making movie for Weaving, who previously appeared in McG’s The Babysitter from 2017, a forgettable Netflix product. Her physical performance alone marks an impressive transition from the rattled bride who just discovered she’s doomed to an armed-and-dangerous hero fighting for her life. Best of all, she’s able to handle both the terrified screams and “You gotta be fucking kidding me” looks of exasperation required of her, making Grace easy to root for. Then again, the entire cast is clearly having a blast in their exceedingly evil roles, even if the performances occasionally seep into the realm of camp. Ready or Not clearly has fun misdirecting us from the unexpected finale with its remarks about rich weirdos and bizzare family rites of passage, which will resonate among those of us who share the movie’s comic cynicism. It’s the kind of low-budget, bound-for-cult-glory movie whose eccentricities will grow on you with repeated viewings.