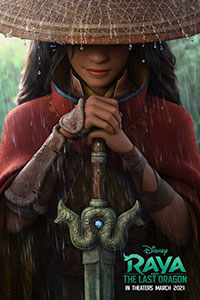 If animation quality were the only criterion by which to judge Raya and the Last Dragon, this review would be glowing. Disney Animation Studios has created a memorable world of Asian-inspired mythological imagery, starting with the expository prologue that uses a creative shadow puppet style. Photorealistic environments give the story visual dimension, and at times, the viewer finds themselves lost in the splendor of flowing water, cherry blossoms, and the textures of hair and fur. When characters express themselves, it’s with convincing, relatable gestures and facial movements that capture a perfect blend of cartoonish and realistic. The movie’s color palette consists of vibrant blues, greens, and purples that occasionally glow like the bioluminescent creatures in Avatar (2009). Its use of light, too, is evocative and painterly. Directors Don Hall (Big Hero 6) and Carlos López Estrada (Blindspotting) guide the animation team to imagine epic sights, situating the material in a tradition of grand adventure and spectacle. But for all of its visual beauty, Raya and the Last Dragon is a by-the-numbers story with a script best suited for young children.

The major difference between Pixar features and those released by Disney’s animation division is that the latter aims itself at kids, whereas Pixar tends to address the entire audience regardless of age. Take Onward and Soul, Pixar’s two titles from last year that not only entertained children but profoundly confronted emotional dilemmas experienced by adolescents and adults. Raya and the Last Dragon has little of that resonance. Instead, the screen story (credited to eight contributing authors) rests on a theme about the power of trusting the good in people, whereas the dialogue and characters become an assemblage of pop quirkiness that reads as trite. It’s as though every character in this story, set in ancient times, speaks with the modernness of Eddie Murphy’s Mushu from Mulan (1998). Characters talk in today’s lingo with lines like “Here’s the sitch” and “Bling is my thing” to appear relatable and amusing to Gen Z and Gen Alpha. But instead of connecting with that audience, it feels like when your dad tries to repeat things he saw on your Instagram feed.

The story takes place in the mythical world of Kumandra where, 500 years ago, humans lived in blissful coexistence with dragons that look like My Little Pony dolls. Then came the Druun, a globulous evil force powered by human negativity that threatened to turn every living thing into stone. The dragons came together to create a mystical gem that would stop the Druun, but in doing so, they sacrificed all but one of their own. The last dragon, named Sisu, has been in hiding ever since. The story now finds the humans split into five feudal kingdoms—Heart, Tail, Talon, Fang, and Spine—that distrust each other. Raya (Kelly Marie Tran) is the warrior princess of the Heart kingdom that has the dragon gem, which is guarded by her single father, Benja (Daniel Dae Kim). He believes that the only way for the other struggling kingdoms to thrive is by bringing them together, so he invites representatives from the other clans to a peaceful meal. Inevitably, Fang’s warrior princess Namaari (Gemma Chan), whom Raya has befriended, betrays the peace and breaks the gem into various fragments that go to the five kingdoms. In doing so, she awakens the Druun. 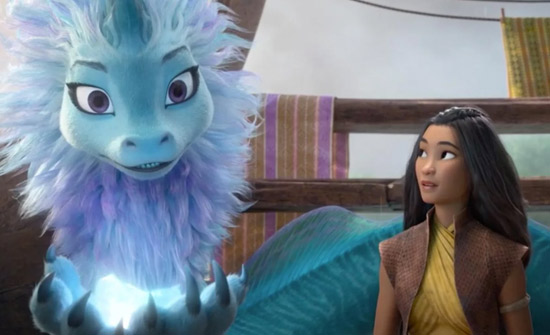 When Raya and the Last Dragon finally moves on from recapping what happened in the long-long-ago, it picks up six years after most of the world has been stonified by the Druun. After a long search, Raya finds Sisu, a plucky underachiever dragon voiced by Awqwafina. Together, they set out to each kingdom to find the remaining fragments of the gem. In each location, they add another member to the ever-growing posse (a boy cook, a lonely warrior, a con baby, etc.), and each new gem fragment gives Sisu another new power (shapeshifting, fog, flying, etc.). If ever there was a movie written like a videogame, complete with various MacGuffins to obtain and levels to overcome, it’s Raya and the Last Dragon. At each stop, there’s a series of martial arts encounters, sword fights, and Indian Jones-esque treasure hunting—all of it visually inspired if somewhat overly familiar.

Thematically, the movie contains a message about the self-destructiveness of human beings and our talent for exploiting every natural resource until it’s gone. Only by coming together can we stop the world from turning into a barren dystopia. Doing so proves simple given that the kingdoms are mostly similar and, aside from the distinguishing undercut or variation in their official garb, they don’t have the stark differences in beliefs that would make bringing them together seem impossible. They share the same basic history, and based on what we learn of them, their ideologies do not oppose one another. This makes trusting one another easier and, compared to the real world, cartoonishly simple. One cannot help wonder what Studio Ghibli or Pixar would have done with the same basic outline, or how much more sophisticated the message would have been had Raya needed to convince people from different religions or ideologies to come together. As is, it’s a worthy and idealistic message to trust one’s neighbors, but it’s incorporated into the proceedings with sledgehammer subtlety designed for young children.

Adults may feel somewhat squirmy in their seats watching Raya and the Last Dragon, if only because it’s painfully apparent that it’s not meant for them. From the character designs that will lend themselves nicely to plastic toys and stuffed animals to the simplistic emotional stakes, the movie feels like kids’ stuff. This is a sharp contrast to some of Disney’s more sophisticated output in recent years, such as Zootopia and Moana, both from 2016. But if you’re only watching the movie for some vibrantly colored animation and some basic shut-off-your-brain storytelling, you could do worse. The dragons are cute and cuddly, so is Raya’s companion “furbug” named Tuk Tuk, who doubles as a kind of unicycle. Everyone in the predominantly Asian voice cast does excellent work, including a rugged Benedict Wong and newcomer Izaac Wang. Awqwafina is particularly well-cast, especially after Sisu takes human form and begins to vaguely resemble her off-screen counterpart. Then again, Awqwafina’s distinct and decidedly modern personality tends to betray the ancient mythological world on display. The fault with Raya and the Last Dragon lies in the screenplay and banal structure. With few surprises along the way and its characters following generic patterns, the movie’s otherwise affecting message about trusting other cultures loses its resonance. In the vast body of Disney’s output, this is a minor effort, disappointingly so given the production’s rather incredible artistry.