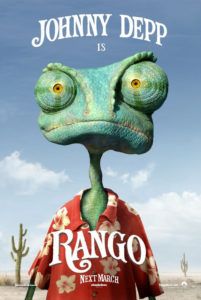 Rango is a cineaste’s delight, a rare example of how filmmakers can take inspiration from earlier classics and still put together something that doesn’t feel derivative. After tackling swashbucklers with his Pirates of the Caribbean films, director Gore Verbinski and his production company Blind Wink rearrange another classic genre, the Western, into a creative, sometimes surreal animated adventure. The film, gorgeously realized by special FX company Industrial Light + Magic (their first full-length animated feature), has brilliant colors that are only matched by the enthusiasm of the storytelling, which could be called anything from “arty” to “completely bonkers”. But this curious and delightful mixture of movie adoration and escapist entertainment is anything but typical.

Johnny Depp voices the title character, a philosophizing, nameless pet chameleon who, born to assimilate with his surroundings, embarks on an existential journey into the desert to find himself. Before long, he’s playing the role of a mysterious Western hero named Rango. He earns himself a sheriff’s badge in a dusty town called Dirt, whose water has all but dried up. The townsfolk, including a lizard love interest, named Beans (voice of Isla Fisher), look up to their new lawman to protect their remaining water reserves. But Dirt’s mayor (voiced by Ned Beatty), a shifty, wheelchair-bound tortoise (a character inspired by Morton from Once Upon a Time in the West), has aspirations that reach beyond Dirt’s collection of ramshackle buildings and dried-up wells. And he’ll do anything to reach them.

Writer John Logan (Gladiator, The Aviator) constructs a wonderfully familiar Western tale involving themes of development, expansion, and the death of the Old West—themes maintained by cinema’s greatest Westerns. Filled with conventions and oft-used formulas, Logan and Verbinski’s story avoids becoming a tired rehash through strong characters and energetic voicework. In addition to those already mentioned, Ray Winstone, Harry Dean Stanton, Alfred Molina, Abigail Breslin, and Stephen Root lend their voice talents. In the style of Surf’s Up, Verbinski recorded the actors’ voicework together, as opposed to the traditional solitary sound booths. He even went further by erecting a skeletal stage, then offering props and meager costumes to the actors to further immerse them into their roles. Meanwhile, avoiding motion capture technology by instead filming the physical and voice performances of the actors, Verbinski’s 23-day shoot was recorded to provide animators with cues to the actors’ expressions and movements.

The filmic references here are many, with caring attention paid especially to classical Westerns, from John Ford to Sam Peckinpah. In broad strokes, the narrative involves a lone hero entering a town to fight villainy and corruption, in a greater Monument Valley setting, with characters meeting all the Western archetypes audiences expect. Gritty faces fill the saloon and the villain is actually a serpent, a Gatlin-gun-tailed killer named Rattlesnake Jake, voiced by Bill Nighy. Timothy Olyphant does a fine Clint Eastwood for his Spirit of the West, a dead ringer for The Man with No Name. An airborne bat-attack recalls the helicopter invasion from Apocalypse Now. The plot’s conspiracy reveals itself to be inspired by Chinatown, if not The Ballad of Cable Hogue. Hans Zimmer’s score alone touches on iconic music from Ennio Morricone (The Good, the Bad and the Ugly) and Elmer Bernstein (The Magnificent Seven). And this may be the only animated family film to include a reference to Fear and Loathing in Las Vegas, complete with Depp voicing Hunter S. Thompson.

ILM’s animation is simply gorgeous, with characters designed in exaggerated, yet photoreal ways that explore no end of color and detail. The faces alone are incredible without consideration of their landscape, which might leave you questioning if what you’re seeing is animation or not, thanks to visual consultant Roger Deakins (cinematographer of The Assassination of Jesse James… and No Country for Old Men). The pretense of “animated film” usually suggests that parents are taking their children to the show, whereas this one should have adults racing to theaters, children in tow or not. Pushing the PG-rating, plenty derivations of “hell” and “damn” are heard for emphatic value, and the shootouts aren’t safe cartoon gunfights where no one dies. Indeed, this is a dangerous Western world where villains swear and bullets kill. But it’s also an immersive experience in terms of story and visuals, and it accomplishes this without 3D technology. Audiences are allowed to bask in the glories of the animation without dimming glasses or random effects emerging from the screen.

Filled with clever ideas, eye-popping imagery, and thoughtful dialogue, here’s a work of animation that shares almost nothing in common with standard animated fare from Dreamworks or Fox. Made for and by people who know and love movies, its grand imagination comes infused with incredible action sequences only possible in animation, and characters that represent fully formed, yet fondly embraced tropes. Most exceptional is the energy with which the film employs its references, not through elbowing “get it?” dialogue or movie-stopping nods, but through a visual style that innovates with a sense of inspiration and intertextual excitement. Labored over and lovingly made, in the white noise and banality of most animated movies today, Rango booms with freshness and energy, making it an early-year contender for the best animated film of 2011.