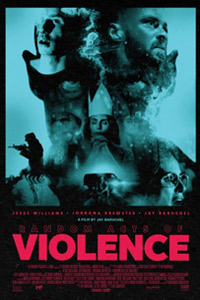 “Real art is truth,” read the comic book panels in Todd Walkley’s mind. “Everything else is masturbation.” Todd knows these undecided last lines to his comic, called Slasherman, won’t give his ongoing series the ending it deserves. The comic has become a sensation, inspiring hordes of fans to dress up like his creation, a psychopath in a welding mask. Todd based his comic on a rash of killings that occurred in the late 1980s; one of the victims lived in his childhood hometown. Still, the final lines of Todd’s comic reflect how the killings inspired him to create a work of art. But what manner of twisted expression will his comic books inspire? That’s the central question of Random Acts of Violence, the second feature directed by Jay Baruchel, who adapted the 2010 graphic novel by Justin Gray and Jimmy Palmiotti into a screenplay with his longtime friend and collaborator, Jesse Chabot. On the one hand, Baruchel’s film raises questions about whether artists are responsible for the art they inspire; on the other, it’s an effective slasher with gore and shocks to spare.

The basic setup follows a foursome on a short promotional road trip from Toronto to the New York Comic-Con. Todd (Jesse Williams) is accompanied by his friend and publisher, Ezra (Baruchel), and his aspiring-artist assistant, Aurora (Niamh Wilson). Todd’s wife Kathy (Jordana Brewster) joins them to research her book about “twenty-first century western decay,” in which she plans to give a voice to the victims of the I-90 killer—the same maniac who inspired Todd’s comic. Almost immediately, the warning signs of something dangerous on the horizon begin to stack up: they almost crash into a creepy black van on a country road; they stop at a dingy gas station, where they find a dead dog wrapped in barbed wire and plastic; and Todd’s first radio interview turns into an attack about his choice to depict misogynistic violence, and its effect on our culture. And after a group of twentysomethings ends up slaughtered on the side of the road, their bodies contorted in a manner depicted in Todd’s comic, it becomes apparent that his choice of subject matter has consequences.

Baruchel takes a considerable leap forward from his 2017 directorial debut, Goon: Last of the Enforcers, and steps into the rich tradition of Canadian horror. Random Acts of Violence has a strong visual sense, and along with cinematographer Karim Hussain, Baruchel finds some effective uses for light and shadow. Consider the omnipresent hues of red and green, where whole rooms or parking lots seem to be illuminated with intense holiday fluorescents—even the moon glows green. Later, it becomes evident why Baruchel has Christmas on his mind. The comic book animations used throughout are less impressive; they lack the graphic style of comics and instead recall the Dire Straits’ “Money for Nothing” music video. Elsewhere, the director creates a number of grim deaths. When the hulking killer (Simon Northwood) slays everyone inside an SUV, the outcome looks genuinely disturbing, with one stabbing sequence reminiscent of those memorable, penetrative scenes in Zodiac (2007). Another moment when the killer emerges from the shadows is so well-timed that it’s bound to make you leap out of your seat.

But as soon as the film begins to discuss artistic responsibility, the viewer must question whether Random Acts of Violence adopts a stance of “do what I say, not what I do.” Baruchel doesn’t shy away from bloodshed, decapitations, and disembowelments—all rendered with tangible, if somewhat rubbery, practical effects—yet his film risks hypocrisy when its characters preach about the dangers of portraying violence in art. Todd has been inspired to tell the Slasherman story, just as Aurora wants to become an artist too, out of a healthy desire to express themselves as a form of therapy. But Kathy sides with aesthetic theorists like Plato when she argues that, if art represents something evil, it has the capacity to create evil. Accordingly, whenever there’s a school shooting, cultural critics raise the same arguments in favor of censorship, that there’s a societal bleedthrough effect when entertainment constantly portrays gun violence or slashers who delight in killing women. Baruchel doesn’t have a defense for his film’s copious gore, but he does acknowledge the problem to start a dialogue, which is more than most slashers can say.

After debuting at Fantastic Fest in 2019, the film will live on Shudder, the horror-themed streaming service that’s also the perfect place for this sort of thing. General audiences may find the film’s imbalance of gore and aesthetic debates tiresome, whereas genre enthusiasts will surely embrace the discussion. However unlikely, Baruchel manages to make a point with Random Acts of Violence, even while supplying a tense and involving experience. The result may not hold up under rigid intellectual scrutiny—Kathy would not approve of its grisly methods—but the screenplay explores its central theme enough that watching the film from a purely escapist perspective remains a challenge. Still, it’s shot and edited with enough style to make the 77-minute runtime (excluding the end credits) immersive, and it bodes well for Baruchel’s next directorial outing.